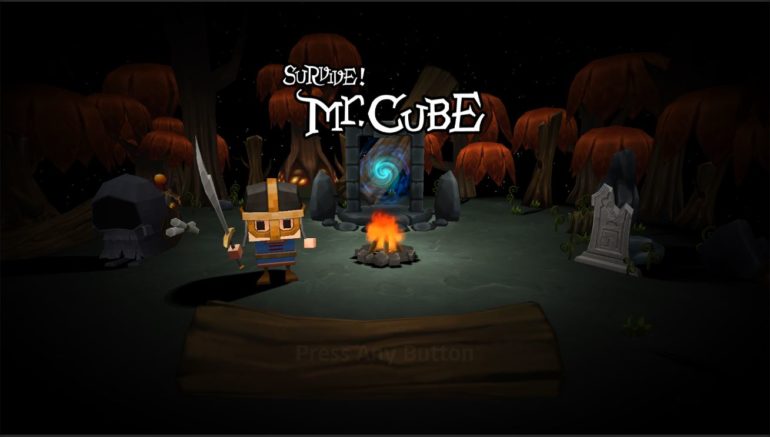 Survive! Mr.Cube Is Totally Not Minecraft

Human beings are creatures of habit. Regardless of how exciting one's life may be, I think we pretty much all have a basic routine that we follow. Some of us are happy with that routine, even if it may be mundane. Some of us would go a long way to protect a very simple and mundane way of life. Of course, as a certain butler once said, “some men just want to watch the world burn.” Today we take a look at Survive! Mr.Cube on the PS4. It is time to find out just how important that routine is to you. 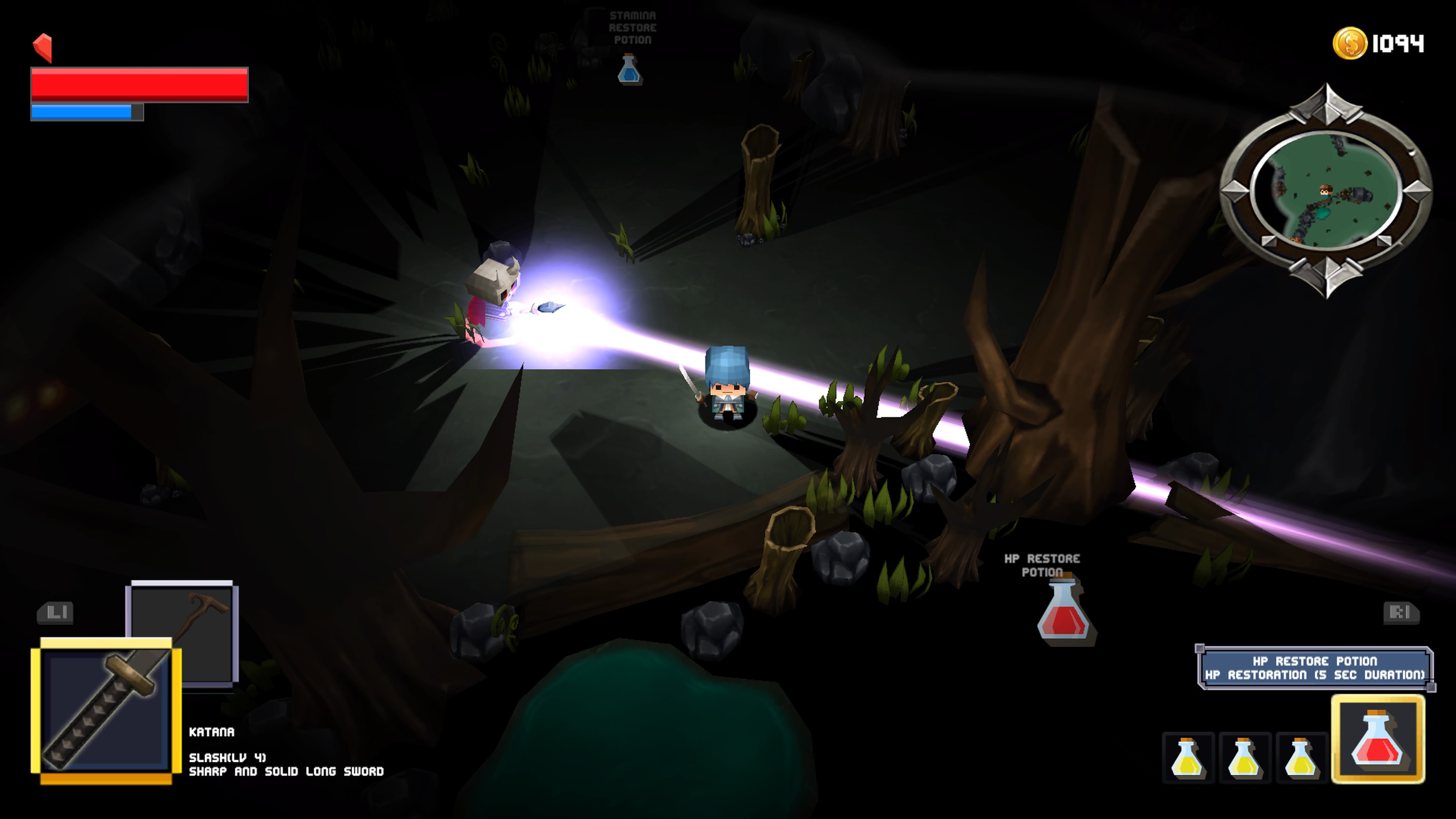 I think this goes without saying, but you are Mr. Cube in this game. Mr. Cube leads a very simple and very boring life. One day he met the woman of his dreams. Without hesitation he married her and continued his boring life. His life was fantastic because of this person that decided to share hers with him. Everything was boring, yet great, until one day after work. Making his usual stop at the local pub, Mr. Cube met a strange man. Why you would even entertain conversation with a man in a hooded cloak anywhere is beyond me. Why you would take a pill from anyone in a bar is seriously beyond me. Take it he did and that was the end of his great days.

Mr. Cube wakes in a strange world with nothing but a campfire, a sword and an ominous portal. Desperate to make it back to his wife, he grabs the sword and enters the portal. This is where Survive! Mr.Cube begins, but the title is highly misleading. Not long after entering that portal, Mr. Cube shows that he is not a proficient fighter. This leads to his untimely death. Sorry Mr. Cube, maybe next life. Next life indeed… 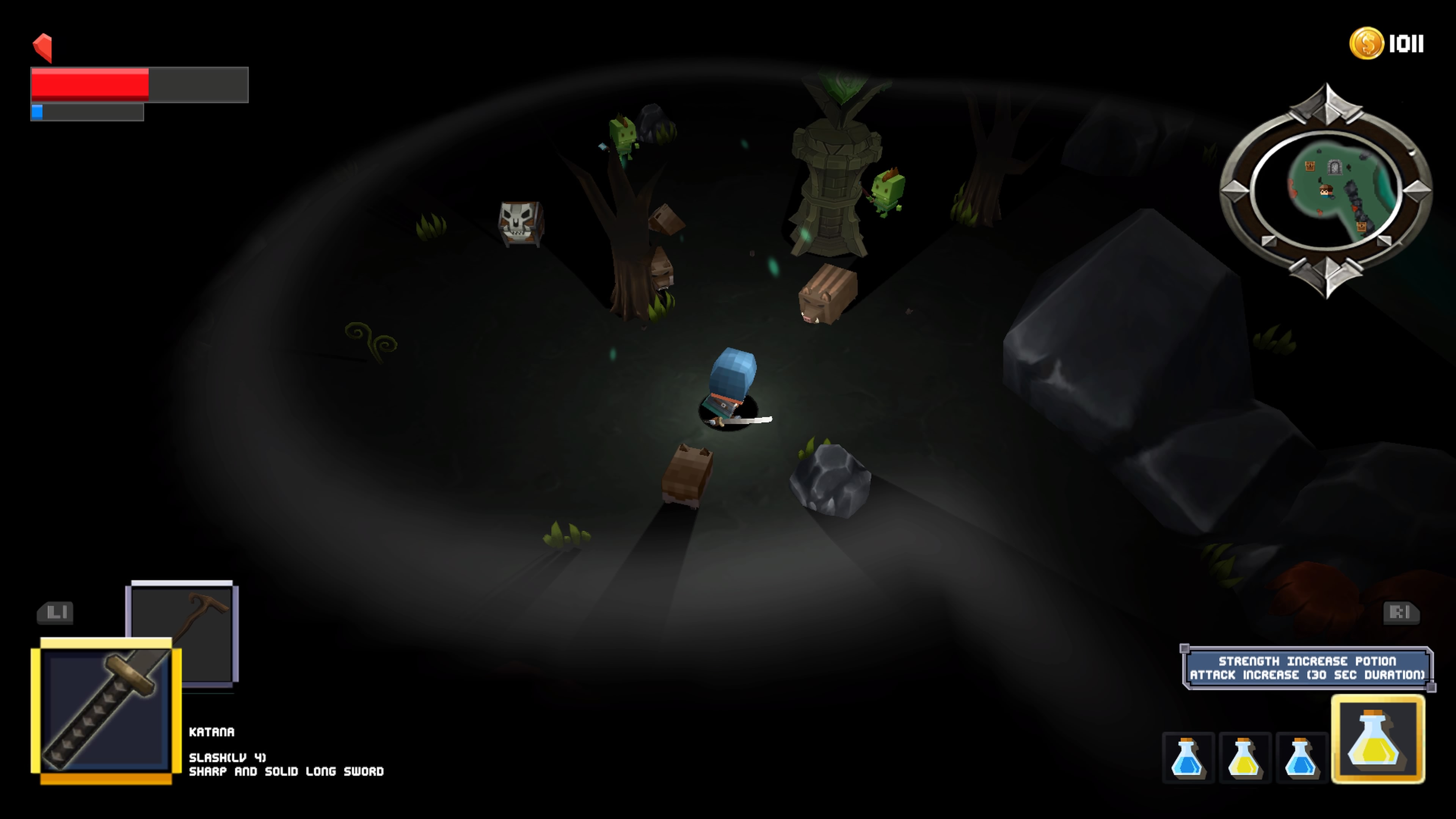 The Title is a Lie!

I say that both in jest and complete seriousness. Mr. Cube is going to die. If you manage to beat this game with Mr. Cube (the first character), show me the video and I will send you something (1 winner only). There is a bright side to Mr. Cube's horrible death however. Another unwilling victim will rise in his place. That campfire now has Mr.Cube's grave and a merchant.

Rob from the Dead to Keep Yourself Alive!

Like a true degenerate, the next cube (and the next and so on) dig up Mr. Cube's grave and receive an item or weapon. Each cube is different (according to their bio, some are not cubes), wielding a different weapon and having different skills. Learning the ups and downs of the equipment is what will ultimately get (one of you) back home. That and the luck of the draw.

Every Which Way But Up!

Survive! Mr.Cube uses an isometric, top down perspective and gives you a 360° attack capability. Developer Intragames used both sticks to accomplish this. Left analog is used for movement and right for attack. Holding the right analog in a direction will allow continuous attack, limited by your stamina (SP). Each cube has a different primary weapon. You can switch this with a secondary weapon you find at the grave or in-game. Weapons also have levels so you will see better results as you get stronger weapons. The control scheme seems weird at first but it really works when you have to attack while retreating. Combine a good ranged weapon with the power-up potion and your cube is deadly.

Players may find themselves just as bewildered as Mr. Cube at first. This is due to the fact that the map (and world) are always obscured until you move through it. The game world consists of twenty-five randomly generated areas, one of which contains the final boss. Defeating this boss is the key to getting home, but just surviving long enough to find it is part of the problem. There are no shortcuts when the world is randomized every time you start a new game. Remembering your path when you die is equally useless because the game once again mixes the areas up. Luck, skill and twitch reaction combine to determine whether you escape the world or not. 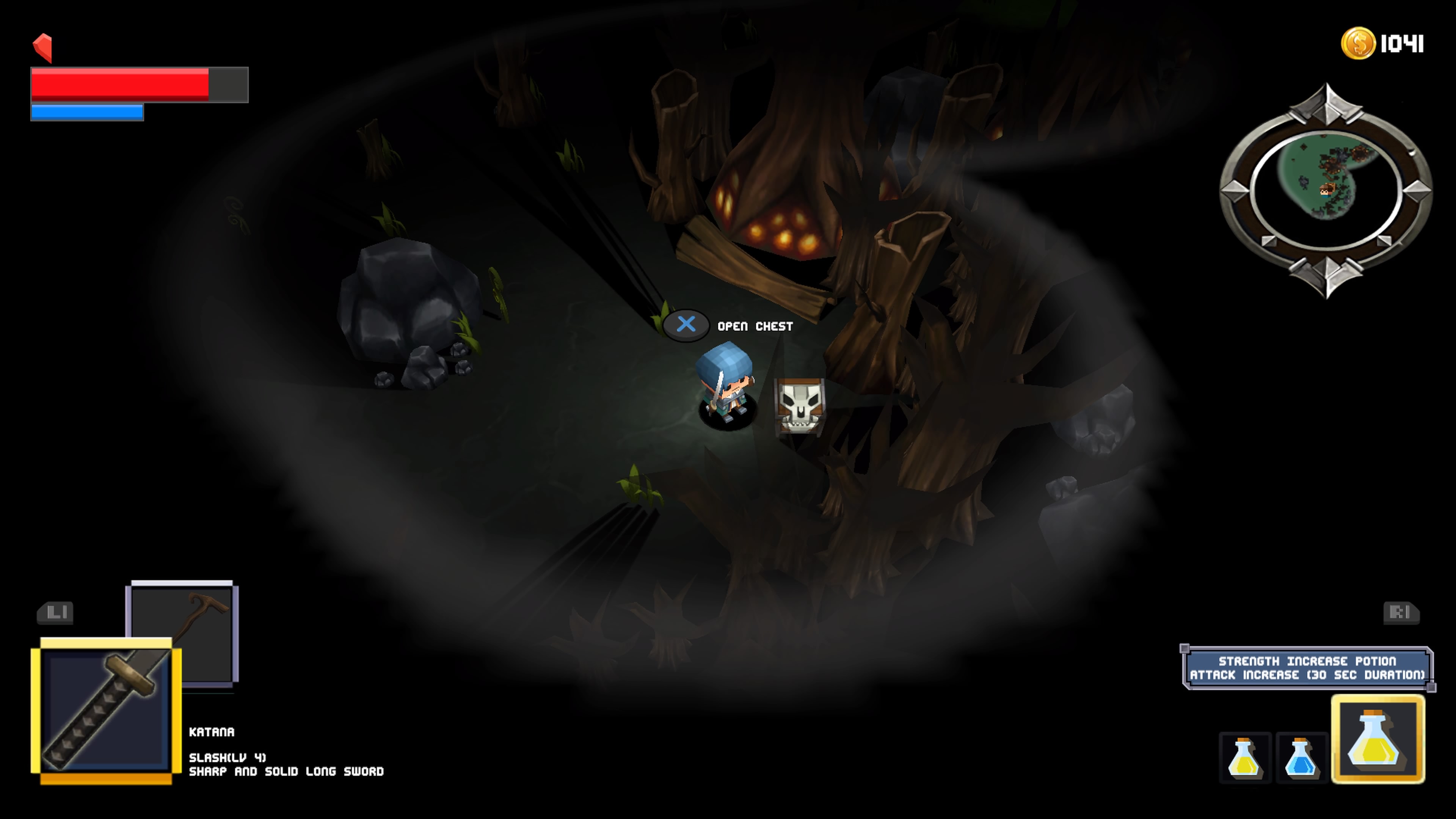 Survive! Mr.Cube is based upon a 2016 mobile game of the same name. There are definite differences, but the core gameplay and graphic design have been maintained. The name Mr. Cube is not only that of the primary character, it defines the game's style as well. Using a super-deformed or “chibi” art style, the characters are similar to those found in Minecraft, with somewhat more detail. If you hate the look of that game, you probably will not like the style of this one. There are some cool lighting and shadow effects and the game has a solid framerate. The decision to have the player carve out the map as they move probably assisted in that. Monsters do pop up out of nowhere, but because of the darkness it feels perfectly normal. If this game were first person or VR, it would probably freak people the hell out. Maybe the next title from Intragames should try that. 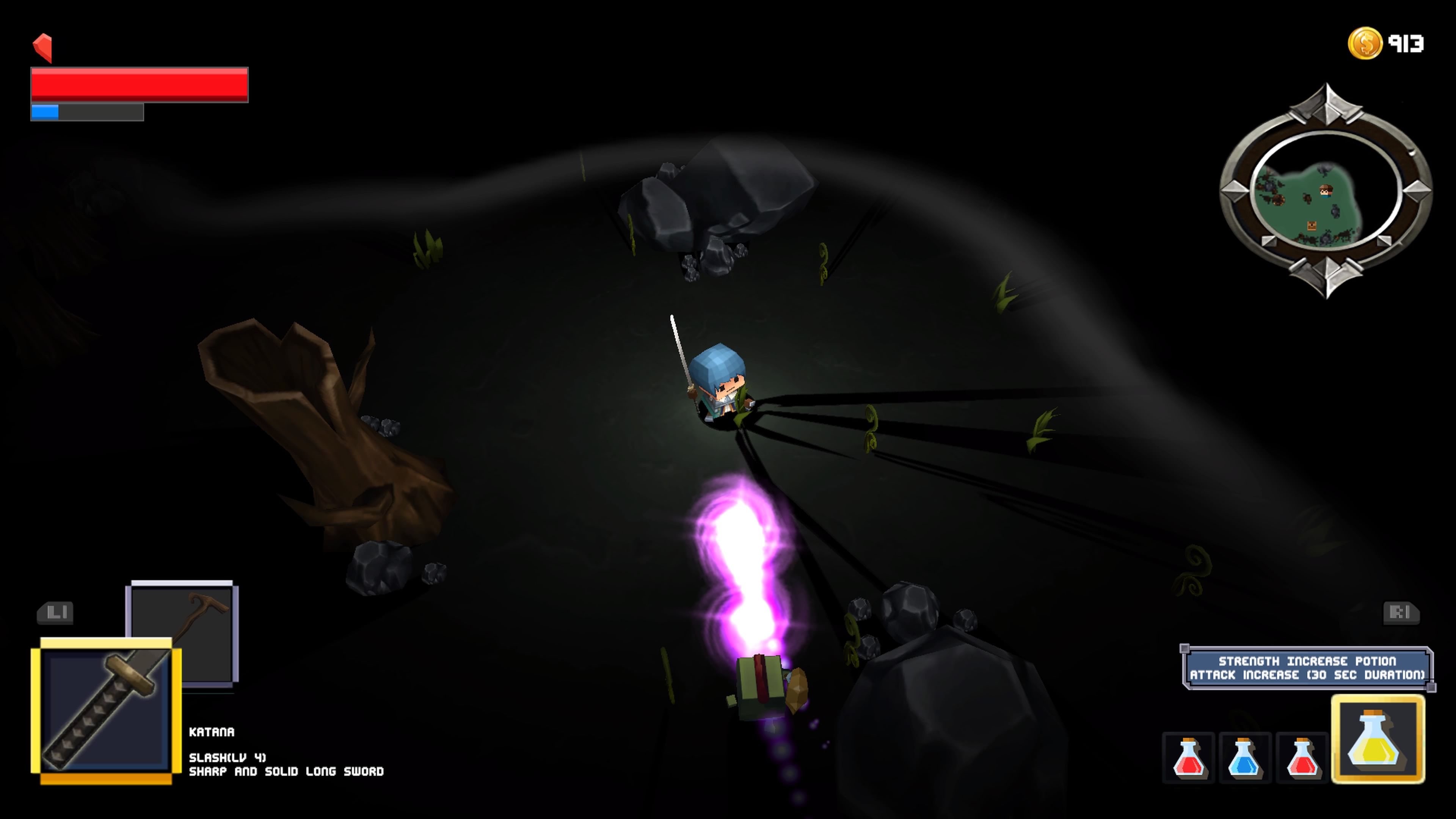 Verdict: Does Mr. Cube Have the Will to Survive?

Survive! Mr.Cube is the type of game that grows on you. Whether that growth be an alien symbiote or just some bad foot fungus is up to you. The story is simple, but one you can relate to if you have ever had longings for home. The graphics are not so great you will punch your momma, but the Minecraft look and solid framerate work. The gameplay is the part that will probably divide people the most. If you have ever played an arcade game with a rotary joystick like Victory Road, you should try this game. Definitely check this out on Switch as it is a great game to be able to pick up and put down on the go.

I would have to say that I enjoyed this game but there are definite shortcomings. $14.99 is steep for a game that you can complete – and I mean do everything in three hours or less. PS4 owners can platinum this game in a single sitting. I think the greatest value in this title lies with speed runners. With everything being randomized and with the near impossibility to finish this game with Mr. Cube, broadcasting a perfect speed run would be a dream for that type of streamer. Sadly, that person is not I, so do not look to my channel for it. I would say pick it up on sale, but the $15 might be worth it to a popular streamer. Let's bring Mr. Cube home to his lovely wife!