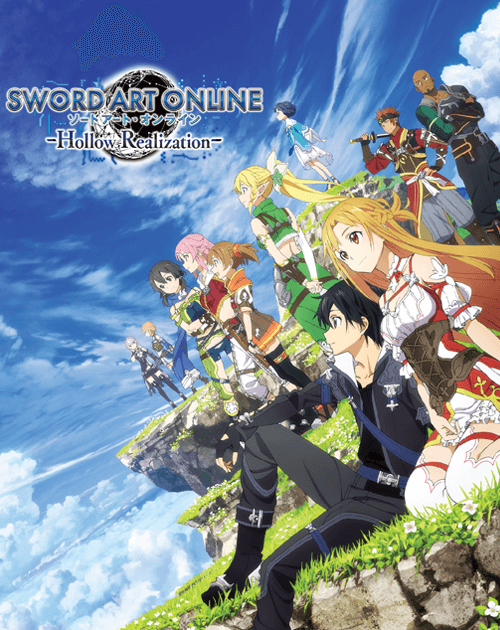 Anime fans know that every year there is one series that stands out. Everyone loves it and because of that, everyone also hates it. It is the greatest anime ever (that year) and that makes it cool to trash it. I can go on and on about that but it is for another discussion. The anime that fit into that spot back in 2012 was called Sword Art Online. The premise of being stuck in a virtual reality MMO was not new, but SAO blew people away with its story and characters. The popularity led to a series of games that began in 2013 with Sword Art Online: Infinity Moment. It is worth mentioning that the games follow an alternate timeline that branches off from a point after Kirito defeated Heathcliff. Though you will see similar characters, those more familiar with the anime, manga or light novels might be a little confused. This is a different story and it progresses from Infinity Moment all the way up to our current title, Sword Art Online: Hollow Realization. As a fan of the anime, it is important for me to know that in order to experience this story with an open mind. 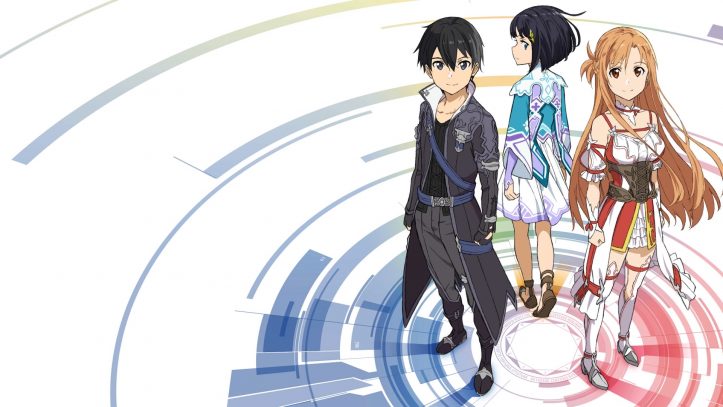 AINCRAD: GROUNDED It is probably a good idea to have familiarized yourself with the story of SAO before playing Sword Art Online: Hollow Realization. You are given some brief history, but this game assumes that you know these characters and what they have gone through. Kirito and Asuna were asked to beta test Sword Art origin, a brand new VRMMORPG based heavily on Aincrad. For survivors of the Aincrad tragedy, SAO has become known as “The Death Game.” It took a lot of thought for them to accept the invitation to this new world of Ainground. It took just as much or more to convince their friends from SAO to come as well.

Having confirmed that this new world allows players to log out and that this is not another death game, Kirito and his friends are excited about Ainground and playing Sword Art Origin. After all, this is the world that brought them all together; actually being able to enjoy it is a promising idea. Kirito is still a bit skeptical about things but chooses to keep it to himself at first. His reasoning is solid: the moment he logs into the game for the first time he receives an anonymous message that says “I'm back at Aincrad.” At the same time, he sees an NPC staring at him through the crowd. She speaks something to him but disappears before he can reach her.

The narrative of Sword Art Online: Hollow Realization comes off as highly enjoyable to me. It follows the formula of the original story arc, giving our heroes a mystery to unravel. The concept of them not being trapped in Ainground further strengthens the story because our characters are choosing to come back and learn more about Premiere and her situation. Having cutscenes of the same quality as the anime serves to further motivate the player to see this tale develop. The only drawback is the dialogue. There is so much talking in this game. That is standard in a jRPG, but instead of being part of the aforementioned animated scenes, most of the talking is accompanied by still shots and scrolling text. The first hour of the game has less than ten minutes of gameplay. Fortunately, if you are used to conversation-heavy jRPGs, it will be far from intolerable. 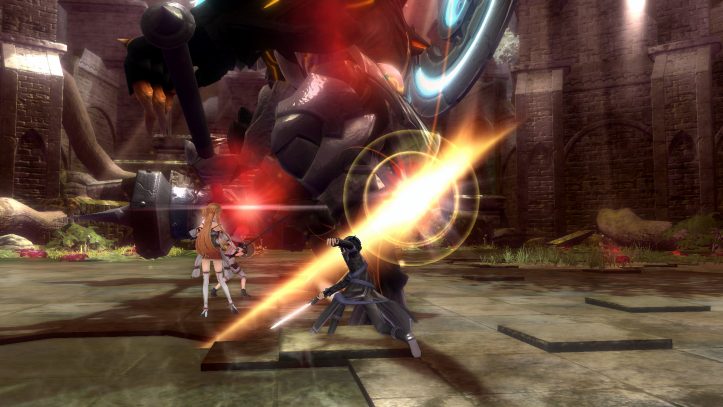 ONCE AGAIN, INTO THE FRAY When I was finally able to really control Kirito (the beginning is slow), things pick up quickly. Know that this is going to be a grind-heavy experience for you, but expecting otherwise from a jRPG would be silly. Know that Sword Art Online: Hollow Realization only holds your hand enough for you to walk on your own. The rest is up to you. To illustrate what I mean, let us look at the first field outside of Ainground's starting area. THe monsters are level 2-3, which is great since you are level 1. Take a few more steps in and you get your first mini-quest where you defeat five giant red boars. They are probably level 5 or so, but they are slow and your quartet will down them with ease. The game advises you that a harder quest lies ahead and it isn't lying. The boars have a boss: a level 12 grey boar boss that has two full life bars. If that is not enough for you, come back at night where those level 2 monsters are anywhere from level 7-10 now. A new quest is in the middle of the field and as you approach you see this: 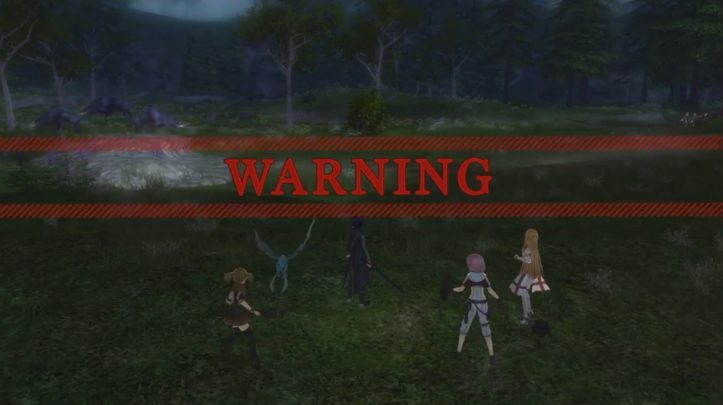 I have played a lot of crazy RPGs, but none that sic a level 36 giant, evil walking tree on you when you are level 5. Hope is not lost however, because your ability to dodge attacks and how well you issue commands to your party can take you a long way. Kirito is known for overcoming insurmountable gaming odds. A good video game makes you feel like you are that character. When you have a full team and grasp the controls, you can last a long time against enemies more than twice your strength. Results will vary depending upon a foe's aggressiveness and you do not want to run into too many at once. The active combat system only lets you directly command Kirito, but the commands he shouts to his (up to three) partners are heeded quickly.

When you are back in town, the gameplay switches to more traditional roles of item management. The buying and selling of items, weapons and armor is standard fare. The multitude of monster pieces and ores you will accumulate can be sold for Col (the game's currency) but some are more useful in the creation of armor or weapons. The hub town itself is one big recruitment center as every player you meet  can be recruited into you party if you befriend them. That brings us to one of the biggest “minigames' I have ever seen. The affinity meter and management of such is essentially a dating sim built into the main game. At least sixteen of the  trophies are tied to maximizing affinity with different characters. Building these bonds leads to everything from holding hands to the princess carry and even “pillow talk.” Including Kirito's friends, there are over three hundred potential partners in the game.

Unfortunately, building affinity is not the part of the game most likely to annoy you. The combat can leave a lot to be desired. The formula is sound but its execution seems wonky. Often I have targeted an enemy, only to have Kirito blaze a path of sword slashes in the wrong direction. This is especially frustrating when you activate your switch combination and could potentially stun or knock over the opponent. If Bandai Namco can patch that one issue, I would forgive even the endless talking because the combat is fun quite often. Even with that major gripe, the developers did a good job of making this game feel like SAO, the anime. Fans will have much to enjoy. 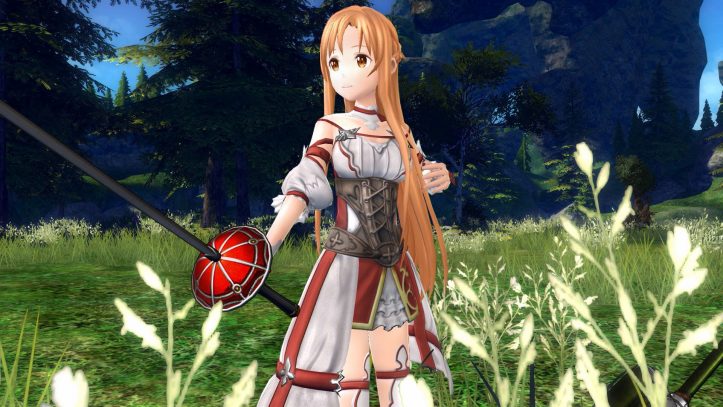 NOT THE VR YOU ARE LOOKING FOR The world of Sword Art Online: Hollow Realization is based upon VRMMORPG. The characters even comment on how real everything feels in the Full Dive system where all five senses are engaged. Unfortunately, that level of realism stops when us players turn on this game. Make no mistake, Ainground is beautiful. Everything is well detailed and (most of) the animation is smooth. The water effects are pretty amazing. The problem is that despite simultaneous release on the PS Vita and the PS4, this game looks like it was ported from the handheld to the console. The PS4 has more than enough processing power to have characters move from one area to another without load times, but even the different parts of the Ainground hub are separated by load borders. The draw distance is quite far but when you see a large monster in the distance moving at less than 30fps, you kinda wish that it were obscured. Probably the worst offense lies with the characters themselves. In the above picture you see the story's main heroine, Asuna. The outfit differs ab it from her original but it follows her color scheme. Each member of the main cast has a similarly recognizable scheme. You should not have to even look at the name to see who is who for this reason but for some reason the in-game models have a color palette that does not match properly. I would have run past Asuna more than once, thinking her a random character if her name were not there. This would be a minor gripe, but you are dealing with anime fans. Detail is extremely important. I am sorry to say that I have not played the previous titles in the Sword Art Online game series. While having watched the anime gives one enough knowledge to know the characters and the situation, the games take place in an alternate timeline where the story progresses from the first game to Hollow Realization. Fortunately, this game is enough of a standalone story that you can follow what is happening without knowledge of the previous games. The narrative of Sword Art Online: Hollow realization is its strongest point. Providing a level of intrigue and mystery not seen since the first story arc, fans will love it. General jRPG fans unfamiliar with SAO will enjoy themselves as well. As jRPGs go, you can do a lot worse in terms of gameplay and there are not very many brand new titles available on the PS4 this year. The slightly wonky gameplay can be countered by properly timing your attacks and learning how to manage your party and keep them healthy during battles. There are graphical shortcomings, but make no mistake that the designs are beautiful. Screenshots do this game no justice. In all, I would recommend this to jRPG fans and not only those of the SAO franchise. Bandai Namco picked the absolute worst month of 2016 to release this game. However, unless you are forced to pick one RPG between this game and Final Fantasy XV, you will have two 100+ hour adventures to add to your PS4 library.