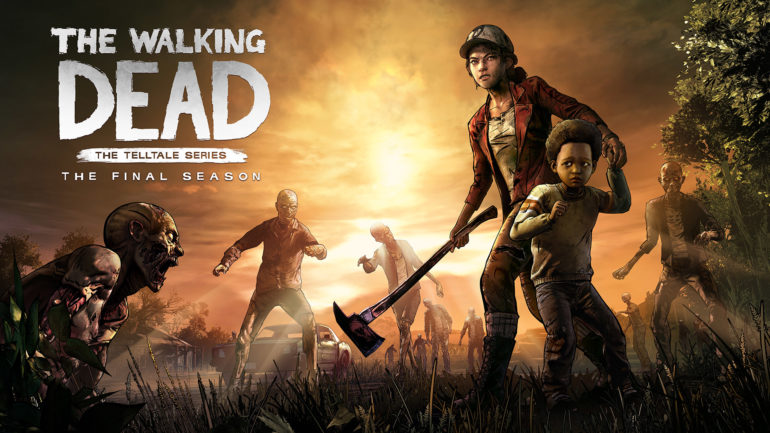 Every gamer has a few characters they are attached to. It might be Mario, Snake, Drake, Lara or whoever. Depending on how long you have been gaming you may have grown up with these characters. Then there is a little girl named Clementine. This is a character that actually grew up herself with fans of Telltale Games The Walking Dead series. Fans knew that the title “The Walking Dead: The Final Season” meant we had to say goodbye to her. Ironically, it wound up being the final game for Telltale as well. Read on to find out if this game is worth your emotional investment.

The Walking Dead: The Final Season is more of a coming of age story than any of the previous seasons. The end of season two thrust Clementine into the role of mother before she was even a teenager. Season three saw that title snatched away from her and she would ultimately snatch it back. While still a child herself, this story is about how you mold AJ into the young man who will stand on his own going forward.

A trap leaves the pair in mortal danger. As she loses consciousness, Clementine sees AJ carried off. She wakes in unfamiliar surroundings with her wounds tended to. The Ericsson School for Troubled Children houses a group of child survivors very much in trouble. Their leader is a boy named Marlon who welcomes AJ and Clem. He asks for help in keeping the group together since they have never seen children surviving outside on their own. As in previous scenarios, joining a new group never goes that smoothly for Clementine.

The first episode culminates in an event that gives AJ a title no child should ever be burdened with. Clementine will spend the entire story making choices that affect his mental state and conscience. You have to be mindful of what you say and do more than ever. She is essentially Lee now and AJ is the child she once was. The difference is that Clementine knew a world before this and was raised like it was going to go away in a few days. AJ was born in the apocalypse, it is all he has ever known and the rules are very different. He is nothing like any other child we have seen in the story.

No matter how you feel about Jane from season two (and three?), her teachings were vital to Clementine's survival. There is a lot of CQC in this season and she still has to reach up to most zombie heads. The move Jane taught her is all that is going to keep you from repeating sections five times or more in a row. That is not an exaggeration at all. Take out the knees before going for the head or you will get eaten repeatedly.

That said, the controls are possibly the best of any Telltale game. The areas I got stuck were due to me not realizing the right approach. The hardest aspect of this season was molding AJ. He pays attention to nearly everything you say and do. Who he becomes in the final episode depends upon your conversation with him and what he sees you do.

Saved the Best for L

Graphically, the Telltale Walking Dead series has always tried to maintain the look of the comics by Robert Kirkman. To that end, the visuals were faithful, but nothing pushing the hardware they were on. In The Walking Dead: The Final Season, the devs really put everything into Clementine's sendoff. The overall look of the comic is still there, but the thick borderlines and 2D look are gone. This season looks much more realistic a la their Batman games.

The Eyes Have It

I could write pages of how Telltale stepped up their game for this last hurrah. What I want to focus on are the eyes of the characters. You have to see them in motion as the pictures do not do justice. The eyes in this game are so realistic and expressive that it is scary. Even for walkers, there are scenes where the eyes alone tell a story. With AJ and especially with Clementine, there are scenes where their eyes are saying way more than their mouths. This is going to sound super creepy, but I hope another developer uses these eyes now that Telltale is gone.

The Night Will Be Over Soon

In the world of The Walking Dead, quiet often means the difference between life and death. That does not mean the game has nothing for you to hear. The Walking Dead: The Final season is alive with both sound and song. The pause menu plays the familiar theme that is enough to give any fan a big dose of the feels. The children at the school play music to cheer each other up. Of course, as the tale inevitably grows darker, music becomes a weapon.

The use of music was powerful. It made you laugh when Louis sang “Oh My Darling, Clementine.” It made you both somber and hopeful when Violet sings “The Night Will Be Over Soon.” When Minerva sings the same song, it will make you angry. The sound effects and ambient music drive home the concept of needing to be quiet in this world. Even during heavy action scenes, the music keeps itself behind the visuals, if that makes sense. The sound team at Telltale really knew how to organize and their skills will be missed.

One Last Time With Feeling: The Final Verdict on The Walking Dead: The Final Season

Emotions aside, This was a decent story. The writers did not strive as hard to ingrain the new characters on you. Then again they may not have wanted to torture fans knowing this is the final season. Clementine has grown in character over the years. In season one, she was weak, needing protection. The second season saw an immense amount of growth in her over several years. The New Frontier gave us a Clementine that primarily cared about herself and it explained why. Now we have a matured and seasoned main character that has assumed the role of protector. This story was a testament to the lore the previous seasons built up and it handled it well.

You will play as Clementine for ninety-nine percent of the game, but gameplay and story are centered around AJ. Dispatching zombies, choosing what to say, etc. is all about getting the “good ending.” There are no special rewards other than knowing you have not raised the next Governor or Bill (William Carver). If you were not a fan of how Season Two concluded in terms of making choices, tread carefully here. AJ is the equivalent of fresh Play-Doh in this game; his final shape is entirely in your hands.

While playing, I have described this season as the “ritual” in Indiana Jones and the Temple of Doom. Despite there being a lot of peaceful moments in the early episodes, you feel this sense of dread looming. Things like the title, the use of the theme on the pause screen and the fact that said screen has Clementine's hat bated in crimson. Everything feels like something terrible is coming. In a Walking Dead story, you know something terrible is, in fact, on the horizon. You just get that “five more minutes, mom” feeling. You want to keep moving forward but you do not want the story to end. That said, I have to say that Telltale Games did an impeccable job with The Walking Dead: The Final Season. My rating is not just for this title, but the whole WWG Walking Dead series. Playing this season without the others makes no sense whatsoever. Go get the entire story and prepare for an emotional freefall.