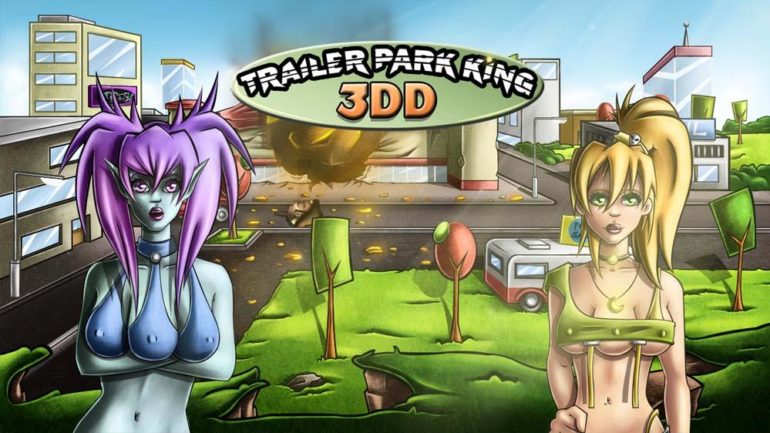 The title screen alone should tell ya something

I think back to my days in elementary school when I used to read choose your own adventure stories. It would read like a normal book, but when you reach certain points it would prompt you to make a choice. If you wanted your character to make a certain decision, you would proceed to a certain page. It was a bit of a game because if you made the wrong choice, the story would end badly and you would not reach the intended outcome of the book. When I first started Trailer Park King 3DD, I thought (or maybe just hoped) that the story would play out in a similar fashion. It is important in life to want things; it is equally important to realize that we do not always get what we want.

ZOMBIE DUMBASS The opening moments of Trailer Park 3DD let you know that the story is continued from previous titles but do not really recap said story. There is a recap about halfway through the game, but it has nothing to do with the story at hand and tells us nothing other than trailer park folk are not the sharpest tools in the shed. Anyway, the last two titles had to do with the “death” of King’s nemesis, Truck. Now Truck is not actually dead, but stay with me folks. Truck is now a “zombie,” and to keep the Big Mart staff from eating him (since apparently zombies is good eatin’), King must now prove that Truck is not a zombie. How does one accomplish such a task is what you might ask. The story starts with King sitting on his throne (a public outhouse) reading “Skinny’s Guide To Zombies.” In it, he finds the five most common symptoms of zombies:

Sound logic there, I guess. I should mention that Skinny is Truck’s little brother. He also appears to be an inbred moron and is actually less intelligent than everyone else in the story, so how he wrote a book is puzzling to say the least. Anyway, that is the whole plot. Prove that Truck does not have those five symptoms and you prove he is not a zombie, on to the next episode. I am serious, that’s really it.

“WHAT”PLAY? This part is easy. Notice that at no point have I referred to Trailer Park King 3DD as a game. And that is because it really is not. To explain, I would say that this is more of a digital comic book with mild interactivity. That does not sound so bad, but the interaction is so limited and the humor almost makes Bill O’Reilly seem funny. I wanted to laugh, but there was nothing funny enough to get me there. The one actual moment of gameplay was a shooting gallery minigame that took several tries due to my lack of knowledge of the previous games. A pro tip for future titles: Sequels should assume that you have played the previous titles but they should not require it for progression. You reward your fan base with a trivia side quest or something. Requiring them to know who is a dumbass or a fruit cake or a slut when everybody in your story fits those labels is not cool.

YOU MIGHT BE A REDNECK The Trailer Park King series makes several mentions of pornography has several instances of oral sex – and you will not see any of that on screen so please stop searching for it. I mean, just about every guy has looked up the image of an animated character naked at some point in their life, but this is XBox Live and it is not going to happen here. What you will see are a bunch of trailer park skanks with erect nipples. They are well rendered for your average flash animation, but animation is one thing you will not find here; everything is still pictures. Moving about the trailer park is your tiny body on a Pac-Man sized version of King’s head, followed by Truck in a giant hamster wheel prison. Not sure if that is supposed to keep him from eating people or keep people from eating him, but it is ridiculous nonetheless. The early days of South Park had more production value than what is going on here.

Now I want to be fair here and I know that sounds utterly ridiculous after I just basically went Mike Tyson on this title. This is an indie release on XBOX Live that costs only eighty Microsoft points.  That right there gives it some redeeming value. Granted, I cannot in good conscience advise anyone to spend their eighty points on this or any other Trailer Park King title because the bad aspects are bad, while the good are short in supply. The pictures used in 3DD are reused from the previous titles as are the jokes and I am positive that the next chapter will do the same. I guess I just always look for the silver lining. The Trailer Park King series is downright awful as a game, but I could see it working well as a web comic series or maybe (really reaching here) a TV show. I am far from being above low brow humor; in fact I usually thrive on it. The problem is that the way this series is presented is just poor delivery of said jokes for me. I would love to see something this idiotic work but this is not the way. Please let Trailer Park King Episode 4 be the last episode on XBL.