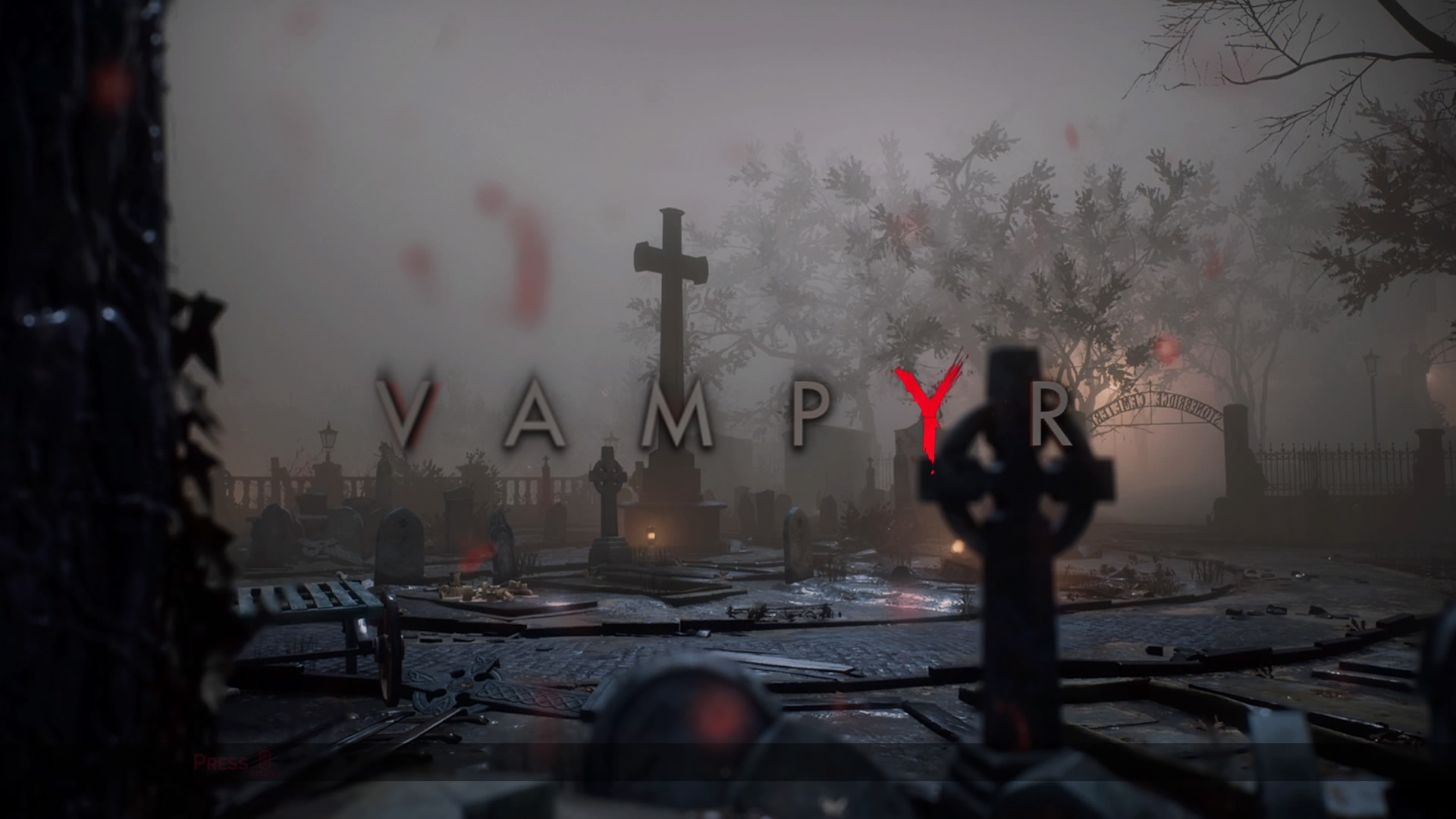 Nods to Memories Past

In 2013, a fantastic yet underrated title called Remember Me came to (last-gen) consoles and PC. Sadly, many cannot do what its title asks of them. This was the first offering from French developer Dontnod Entertainment, whom most associate with sophomore effort, Life is Strange. Despite having only two titles to their name, Dontnod is respected for their storytelling. They also are unafraid to try different gameplay styles. Remember Me and Life is Strange are nothing alike in how they play. Now poised to switch things up again, the developer brings us Vampyr. Dontnod started in the future, came back to the present and now this supernatural title explores our dark past. Let us see if their first male protagonist is as compelling as his female predecessors.

Vampyr – You Are What Goes Bump in the Night

Many games use more than words to tell their story; the imagery and music can be powerful bards as well. Form the moment you hit start, Vampyr literally “goes for the throat” in this sense. The year is 1918 and Jonathan E. Reid was a British doctor during World War I. As the story opens, he lie dead amongst corpses in various stages of decay. Understandably unnerved by this, Reid is more concerned with how he is staggering about. He remembers being assaulted, falling down dead and being tossed in the pit of corpses. Before he can rationalize anything, his body forces him to do something unspeakable.

The Freaks Come out at Night

Jonathan will struggle to deal with this new reality. He accepts early on that he is no longer human but desperately wishes to cling to his humanity. Everything kills something to live but now he must kill the people he wants to save in order to survive. How the player chooses to balance this will shape the narrative of Vampyr.

Sticking to the Roots

The lore of the vampire we commonly see in media originates in Europe. Dontnod relied heavily on that original lore in creating Vampyr. Sunlight and fire are deadly to Jonathan and his ilk. Vampires are very much thought of as monsters and demons in this game. Expect to see stakes, crucifixes and all the classic methods of dispatching them.

The player is tasked with a moral dilemma of who lives and who dies, but the streets of London are a different story. Most of your outdoor encounters will be a matter of your life or (second) death. The streets are patrolled by the Guard of Priwen. This team of vampire hunters are smart and they are prepared to deal with you. Worse than them are Skals and Vulkods. Skals are mutated vampires that often hunt in packs. They are vicious and often insane. Vulkods take on the more bestial appearance of vampire lore and backup their monstrous appearance with equal strength. Dealing with these threats requires you to learn your body's abilities and tailor it to your fighting style.

When did you ever think you would be happy to see rats? In Vampyr, they are a good sign because it usually means there is a hideout nearby. I mean, you can also eat them for blood and health, but that is another story. The hideout is your lifeline because it is both your save point and where you will upgrade abilities and weapons. It stinks that you cannot upgrade abilities on the fly, but the narrative demands you absorb blood experience through sleep. Your offensive, defensive and ultimate moves are all upgraded by killing. How much experience you get depends upon who you kill. If you let the named citizens of London live, the game will be more difficult.

Weapon upgrades and items are easier to come by as you will find items all around the city. You can also buy and trade for them with merchants if need be. Lastly, you will find junk items that can be recycled into parts for your weapons and consumables. A lot of this reminds me of Bioshock and Dead Island; trust that to be a good thing.

Sinking Your Teeth In

Knowing your enemy is the first step; talking to people, eavesdropping and collecting informative items are paramount to survival. Preparing at hideouts will build your strength for what comes next: traversing the streets of London. You start with a machete and will find all manner of blunt, bladed and projectile weapons throughout the game. Despite your arsenal, you will need to be smart because immortal is not invincible. The hack & slash approach will leave you hacked and slashed to pieces. Use the environment to draw enemies in, dodge and stun. Pretty much every enemy is capable of killing you quickly so planning your attack is worth the extra time.

Going for the Kill

Should you choose to feed on one of the citizens, you still have to work for it. You have to mesmerize a victim and lead them to a quiet place away from prying eyes. Maintaining Jonathan's secret is a must. The ability to mesmerize a person depends upon their mental resistance. If you do not have the appropriate skill to break that defense, failure is certain. The one thing I find ironic is the hint system. Should you discover a secret about a person, a conversation option unlocks. Select that option and the animation clearly suggest that you have mentally forced them to speak. Even their tone of voice in response indicates they are under control. I think it is cool, but it kind of breaks the overall mesmerization process.

Dontnod set their story in a London ravaged with disease and supernatural horrors. There are a lot of gruesome scenes and areas you would never want to see in real life. Somehow, the art direction manages to make these areas look really good. There are buildings ravaged by the war and others that remain unscathed. Interiors range from the highest levels of deterioration to lavish Victorian furniture. The people, whether they be dirty, bloodstained or high society, all look very lifelike. Character models have a great deal of detail. Unfortunately, the overall design looks like the pinnacle of the last generation to the beginning of the current. The animation of characters during conversations makes them look drunk as they often wobble about. These are gripes that do not affect the game but I have to point out as a reviewer.

Orchestra of the Undead

The music of Vampyr is truly a monster. As the game begins, the heavy strings of the bass connect you to the rebirth of Jonathan Reid. Each district of London has its own arrangement and the music changes to warn you of impending danger. The music is beautifully haunting and fits this game perfectly. It should come as no surprise to hardcore aficionados of video game music that Olivier Deriviere is behind the composition. He also provided the music for Remember Me, so it is great to see him teaming with Dontnod once more.

Verdict: How Sharp are the Fangs of Vampyr?

Dontnod calls Vampyr a AA production. While true that the game has rough spots, its overall polish is greater than several AAA titles seen this year. I expect nothing less than stellar of Dontnod when it comes to writing. They have a knack for creating an entire world for their games worthy of the silver screen. Vampyr mixes real world history with traditional vampire lore and creates something fresh. Even issues of race are touched upon. I was really happy to see things like that were not shied away from. London's mysteries wait to be unraveled and you will enjoy the experience.

While doing nothing new, Vampyr employs a gameplay design befitting the action RPG genre. You cannot run into combat Rambo-style and expect to survive. strategizing before and during combat will yield the best results. I would have like a bit more stealth as you are a creature of the shadows. The gameplay does employ a fair amount of talking; do not mistake this as a pure action title. The talking goes a long way for player immersion as you will truly feel the lives you may be taking.

The graphics are one of the few cavities in the teeth of Vampyr. Fight animation is smooth, level and character design are great, but some areas just look dated. The in-game visuals also do not live up to those of cutscenes, giving a very PS3/360 feel. PC will obviously look better, but you will still be able to see flaws like wobbly characters during conversation. The music and voice acting are both top notch, but loading can interfere with music. There is also the sticking point that NPCs may repeat dialogue and make no sense. For example, Nurse Crane repeats the same dialogue outside your office as when she first welcomes you to Pembroke. Thankfully, that is about as much as I can report in terms of bugs or glitches.

Bottom Line: If you game on PC, PS4 or Xbox One, Vampyr should be in your collection. Last year, the game also made its debut on Nintendo Switch.

Vampyr
Vampyr is a great action-RPG experience. The moral dilemma of one who must live by killing but swore to do no harm sets a great narrative.
Reader Rating0 Votes
Fangoria
Solid story
The graphics style helps drive the narrative
great music
Tooth Decay
Some graphical hiccups
4
Drink It In