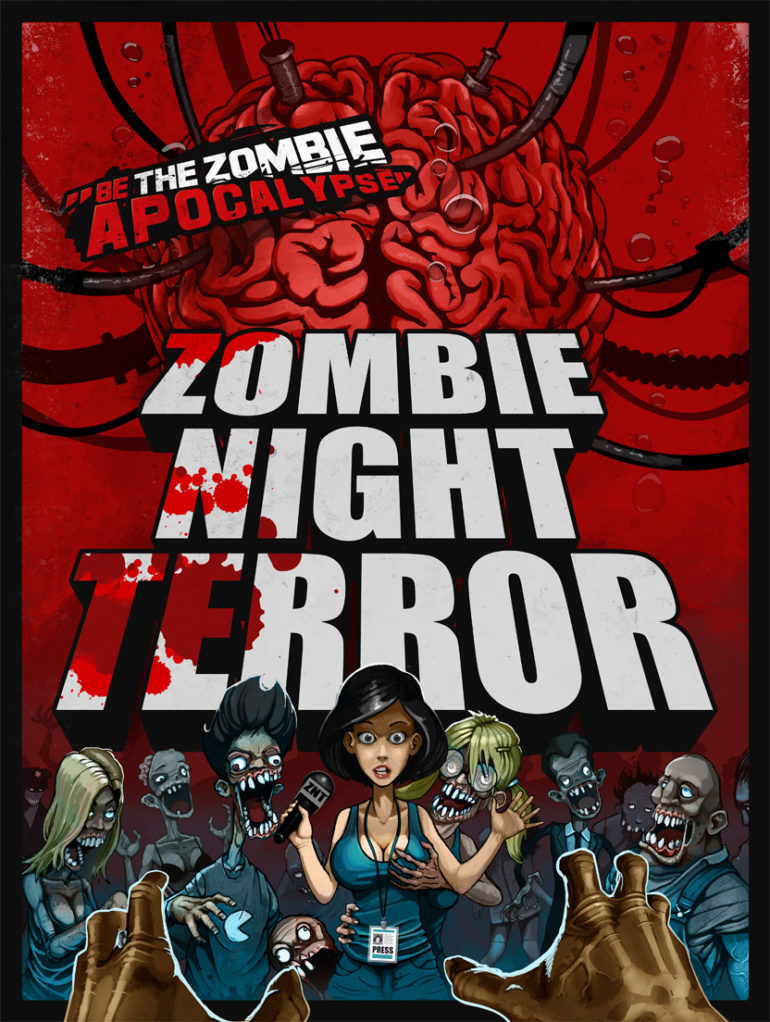 The zombie genre has literally been done to death, pun intended. Movies, TV, video games, comics and even survival hikes have zombies in them these days. If you come up with a zombie idea, people look at you like you are beating the dead horse that got eaten at the beginning of The Walking Dead series. Rest in Peace, you poor, sweet horse. One would wonder why indie developer NoClip would venture into such a saturated market. Hopefully the answer is “in order to make something awesome.” This is where Zombie Night Terror comes in. Now we take a look at the game and see if combining Night of the Living Dead with Lemmings was a good idea.

YOU ARE THE BRAIIIINS Bill is standing outside the Palace Theater, just kickin' it with two sweet honeys. They just saw a zombie flick and he feels like he wants to “gnaw” on someone. It might have something to do with the new designer drug, Romero, he is taking. The girls ask him to pass it around and that is where you come in. Bill has three shots left and this happens to be your supply of mutagen for this level.  You become the driving force for the zombie apocalypse, deciding when people turn and where they are going. Your goal is to put an end to life as we know it. Good luck, “Zomboss.”

I enjoyed the storytelling method employed in Zombie Night Terror. Being an 8-bit game, there are no real cutscenes. You get little dialogue blurbs before certain missions. This is cool because aside from the opening bit, NoClip could have opted to give you nothing but groans and screams the whole game. Instead, we have a plot that develops as the zombies grow in number and the living diminish. This makes the game feel like a true, old-school zombie movie and was a great way for NoClip to deliver the plot.

LEFT 4 LEMMINGS If you have played point and click games where you direct your character(s), then you know the basics of how to play Zombie Night Terror. There are puzles for you to solve as you lead your horde in all directions. You have to figure out how t oassign them properly to keep their numbers up and bring the living down. THis is complicated by doors, walls, taps, pitfalls, etc. SOmetimes your garden variety walker is not enough and that is where TV reports come in. Our buxom babe of an on-scene reporter occasionally pops up on TV and tells of a new zombie type appearing. These mutations help the horde overcome obstacles, cross gaps and take out powerful human defenders. For example, the Overlord directs traffic. You have a spitter that can deal long range damage. The tank plows through solid walls and beats humans to the ground. Figuring out the best way to clear a level can be a little frustrating, but you would not be playing this type of game if you did not expect that.

As a fan of most zombie games, I have a huge appreciation for Zombie Night Terror. Controlling these ghouls is basically like playing the flipside of Left 4 Dead, only with 8-bit graphics in 2D. Many of the zombie types come from that classic and fans of Valve's survival horror series should give this a go. Finally, someone else can run when the Tank shows up!

NIGHT OF THE LIVING SPRITES You won't find any fancy lighting techniques or spectacular water effects in this game. Zombie Night Terror is intentionally a 2D, 8-bit puzzle strategy game. There are one or two things you would not find back in the 80s like a solid framerate and the mutation effects. The game looks great for what it is and the black and white suits the theme perfectly. That said, this game is by no means up to today's graphical standard, especially for that of a PC title. The reason that doesn't matter is twofold. First, there is a strong resurgence of retro games on the market, some of which strangely have even lower fidelity than this game. THe second is that graphics do not make a game, a point I consistently make. Do not shy away from this title because of its looks. The music is very low key and is probably the one place where the game falls a little short. The tones fit the game, it is just that I feel that it maybe could have been more.

Zombie Night Terror is a lot of fun. One thing to note is that hte language and subject matter are not for children. There is foul and abusive language in the game. Also a lot of the scenes, despite being 8-bit, depict things I think many children are not ready for. You might say “well the game is rated M,” but when has that actually stopped parents before? Anyway, this game has over forty missions and will take you a decent amount of time to play through on your first run. Depending upon how good you are at puzzles, I would say it could take up to ten hours. I have seen videos on Youtube however where people have completed the game in half that time or less. This leads to high replayability, especially for those that like to speed run. Finding different paths for your zombies to overtake humanity is the aim of the game. Maximizing the remaining undead when you finish a stage and being sure that no one survives are ways to challenge yourself. This also will lalow you to complete challenges you may have missed. For $13, this is a title that you should be adding to your Steam library.