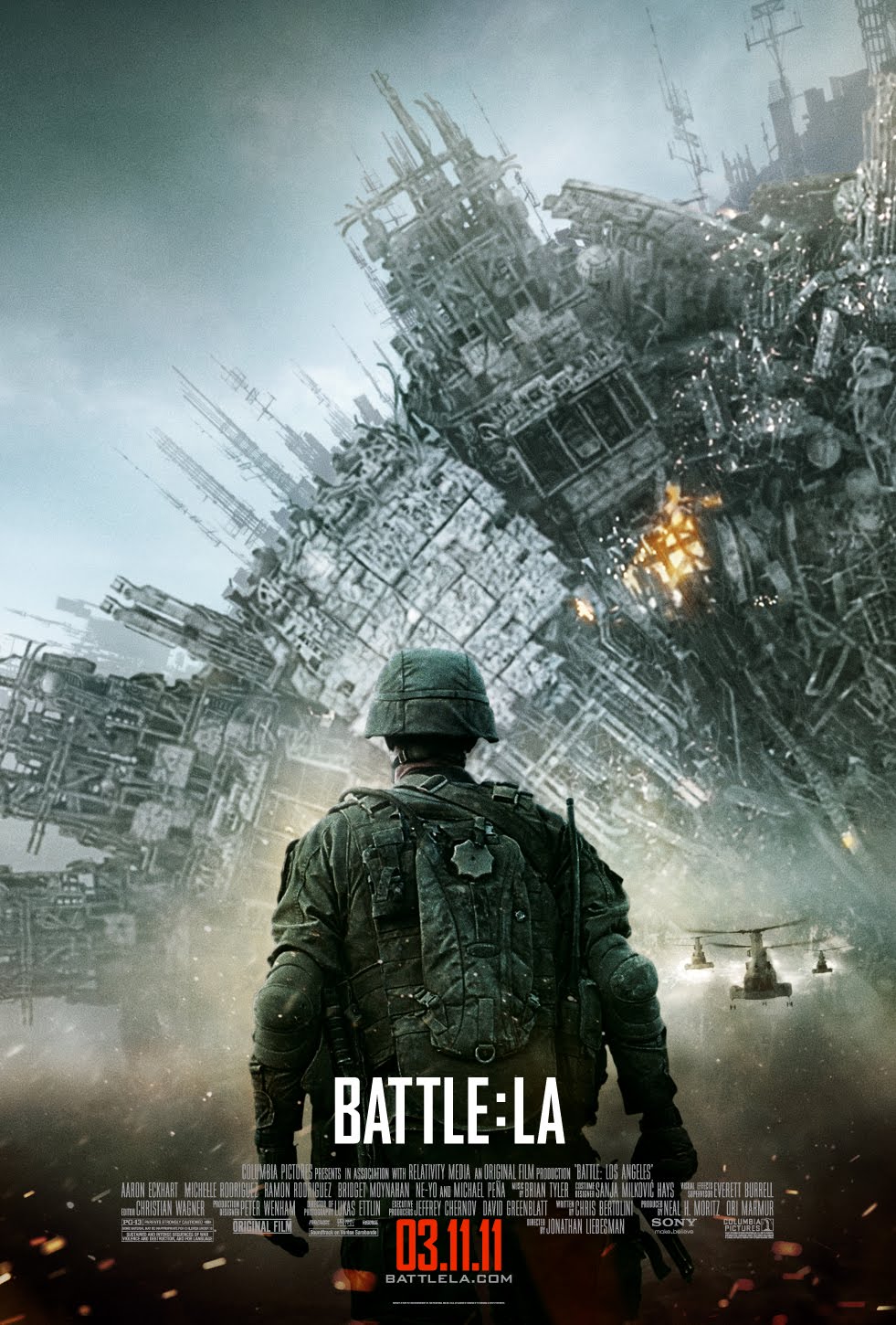 We see war everyday on the news. We see disasters, natural and otherwise devastate cities and even nations from time to time. The one thing that is always constant is our ability to come together and rebuild – a simple brotherhood that transcends races and all the other crap that separates us. But what if the war were not a single event and the disaster was nonstop destruction on a worldwide scale? It is difficult if not impossible to aid your fellow man when you are running and fighting for your own life. If aliens are real, and they were to attack us on a global scale, would the human race endure?

The title is somewhat deceiving. While the majority of the film does take place in Los Angeles, this movie is about a worldwide alien invasion. The goal of the invasion seems twofold: first, the creatures seem to need water for fuel and secondly, they seem to want to wipe us out completely to get it. Plot wise, this movie is nothing. The aliens land, they obliterate coastal cities worldwide and we fight back. The underlying points are what make this movie shine. As the song goes, war is good for absolutely nothing but in this movie, war is absolutely necessary. The enemy isn’t interested in manifest destiny or oil or any stupid thing humans have ever fought over. They are nameless and pretty much faceless; they are biotechnical soldiers with one order and they follow it well. They don’t care if you are man or woman, child or adult, they will kill you so war in this case is about species preservation.

The battle focuses on a marine platoon, slapped together out of the necessity of the mission. They are led by Second Lieutenant William Martinez (Ramon Rodriguez), fresh out of officer school and his second is Staff Sergeant Michael Nantz (Aaron Eckhart), a seasoned veteran hated by many of his peers because it is believed that he is a deserter. They were supposed to pull a get-in, get-out rescue mission from a downtown L.A. police station where survivors had been located. They manage to pull that off but find themselves way over their head. After linking up with Air Force Tech Sergeant Elena Santos (Michelle Rodriguez), they find the get out part of their mission to be damn near impossible. When they pull together, they find out that their mission is the most important in the entire war.

This is one of those movies where the hype from the teaser trailers carries over right to the final product. What grabs you in Battle L.A. is the imagery. You don’t even have to live in California for the scale of destruction to just  hit you in the heart. Anyone without a gun is running away and even those trained to defend and protect are forced to retreat when they want to stand their ground.

The special effects are extensive, but they are made to look like nothing special. The enemy vehicles are indistinct and look like they are made of spare parts. The alien soldiers have no faces and while we hear them communicate with one another, there is no translation offered. This was an excellent visual plot device because there is no reason whatsoever for the viewer to “root for the bad guy” They are not cool looking, they don’t wise crack and they do not have cool vehicles. They land and they kill, that’s it. All you want to see is how many of them the Marines can put down.

The acting is mostly forgettable because it is a war movie. Most of the dialogue is just shouting orders and relaying enemy position from one soldier to another. There are some standout moments though. In the beginning you see Nantz signing papers to resign his commission and we learn about how he lost his whole platoon in Afghanistan and was the sole survivor. This ties in to the animosity he gets from Corporal Steven Harris (Ne-Yo) because one of the men lost was his brother. The best non action scene in the movie is when Nantz confronts Harris – you’ll know you have no heart if that scene doesn’t hit you. Bottom line is that while I expect this movie to do well (financially), do not expect any best acting awards from the academy.

It’s ironic to where I almost wanted to burst out in laughter that the production company for Battle L.A. is called Original Film. There is nothing original about this movie; it is just fortunate that the formula worked and they stuck to it. I have already said what I liked about this movie so I am going to spend a moment on what I did not like. It is a minor gripe considering that I will buy this movie on blu-ray, but I feel it necessary to mention. More than anything else, this is a war flick. It features one of the most badass military forces on the planet and they are up against impossible odds. Why the hell is this film not rated R? You have a scene where they said one of the soldiers suffered third degree burns on his face but when they show him, his skin barely looks burned. The aliens have six rapid fire barrels on their guns and a mortar firing seventh, but we only see one guy get hit and it was a clean wound. I’m sorry, but I wanna see wounds on the scale of Full Metal Jacket and Predator in a movie like this. PG-13 is unacceptable.

I am not going to complain too much about the holes in the movie however. After seeing the content on the website and learning that the story indicates sightings of the aliens as early as 1942 (and the fact the movie is making a lot of money), there will clearly be a sequel. The site indicates that the alien’s hand weapon is more sophisticated than any gun on Earth. The walking gun depicted on the bridge scene has no Earthly equal (according to military analysts). Then there are the things not seen in the movie. There are mentions of mines so powerful that even if detonated on the surface of the ocean, they could create tsunamis and that analysis of the alien weaponry indicates they probably have WMDs exceeding nuclear capability. I guarantee you that it ain’t over folks, L.A. was just the beginning.