Slick’s Nit-Picks: Pirates Of The Caribbean – On Stranger Tides (3D)

If you listen to the show then you know how I feel about sequels. They are usually there just to get the extra buck from us and more often than not, the original story gets butchered. Disney most definitely has been guilty of this; hell, just look at the last couple of Pirates’ movies. Fortunately, the latest installment sheds promising light on the career of one Captain Jack Sparrow. 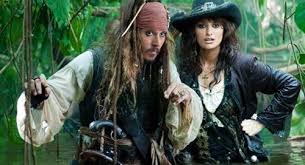 In this fourth (and definitely not) final installment of the Pirates’ series, we find Jack sans his two main deck stains, aka Keira Knightley and Orlando Bloom. Unlike most stories, Disney has actually let theirs end. Good ol’ Jack however, is back and only slightly less insane than at the beginning of At World’s End. We find our “hero” in London on a twofold mission. First, he is trying to keep Captain Jack Sparrow (aka Gibbs) from being hanged. Instead, he leaves him to rot in prison to accomplish his second task: Find Captain Jack Sparrow (aka Angelica Malon), who is recruiting a crew. Insanity ensues in a way only the real Jack could accomplish and we find ourselves at in a three-way race to find the Fountain of Youth. Everyone seems to have their own agenda and it is difficult to tell who is lying. 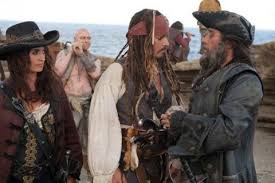 A fresh new cast of characters is part of makes OST work. Penelope Cruz’ character Angelica is literally the female equivalent of Jack and has an even better screen chemistry with Depp than Knightley did. She is strong, passionate and more than a little bit insane. Another new face is Blackbeard, a name that is legend in pirate lore. Ian McShane filled the boots quite well. Then we have Philip and Syrena the mermaid, neither of which really had any place in this movie. Honestly, if you took them out, I doubt anyone would care. One other throwaway character is Oscar Jaenada, who is simply called “The Spaniard.” This guy, I liked and I hope they do more with him next time around. He was sort of a 17th Century version of Prince – he was cool and quiet. And when he did speak, he made a real statement. Our returning roster includes Barbosa, who this time around is out for Blackbeard’s blood. Everybody (except Jack’s) favorite monkey also returns for a couple of cameos. The cast is rounded out with British naval officers, a handful of random pirates and a bunch of hot naked chicks playing mermaids. Minus one scene really, the mermaids were totally unnecessary, but hey, who doesn’t like hot, wet naked chicks? 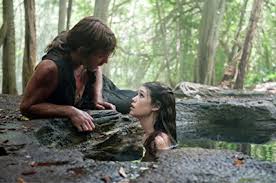 Despite being available in IMAX 3D, this is by far the least effects-heavy Pirates’ tale to date., or at least it looks that way. Financially, it is the second most expensive, but accounting for inflation and the use of 3-D the first time in the series kind of offsets that in my book. If you have a choice, see this one in 2D because the 3D was not poorly implemented, but there are no moments whatsoever where you feel like “Wow, the 3D is awesome.” Unlike the last two films, there is not really an overuse of CGI. While scenes past have been spectacular, it was refreshing to see that a Pirates movie could be done with more subtle touches. It is still a movie that will please the eyes. 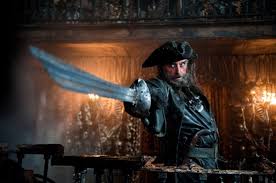 Personally, I felt this was the best Pirates’ movie since the first. Knightley and Bloom will be missed, but Penelope Cruz was awesome and I hope she sticks around for the next film. That’s right people, don’t leave until after the credits or you will miss the final reveal. Focusing more on story than effects is what really made this one stand out for me. Blackbeard’s ship, The Queen Anne’s Revenge, was a character in and of itself which managed to outshine the luster of The Black Pearl. Barbosa’s “new look” was yet another plot device that served the story well. Honestly, the people who will see this movie are pretty well defined; those who have seen the last three or Johnny Depp fans are gonna be all over this. However, even if this were your first foray into the land of Captain Jack Sparrow, I’d still say go see it (in 2D). The story is self-contained and it launches a new chapter in the series. It really should not be missed.