My Take On: Stake Land 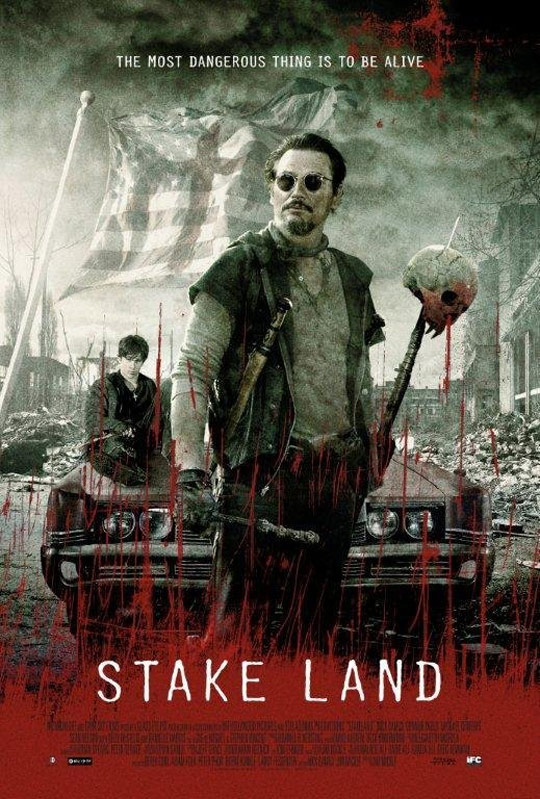 Vampirism spreads across the US claiming men,women and children. Stake Land follows a young survivor named Martin whose family was killed after vampires attack his home. Martin is saved by a vampire hunter simply known as “Mister”. Mister and Martin travel across the desolate and barren United States searching for sanctuary and killing as many undead as they can. Besides contending with the undead Martin and Mister must also protect themselves from the religious cult known as The Brotherhood who see the vampire plague as the work of the lord. With fellow travelers joining them to survive Nick and Mister must survive Stake Land at all costs.

I had the privilege of seeing an advance screening of Stake Land awhile back and I could have sworn I published this review earlier. It seems I didn’t and it would be a tragedy to not share my thoughts on this well done film. At first glance you will immediately make comparisons to the Walking Dead and even Zombieland but this film is in a league of its own. Stake Land is not just a horror film but a depiction of what can happen to society when the shit truly hits the fan. Stake Land’s strengths stem from not being afraid to push the envelope with regards to subject matter. Without spoiling anything I can assure you that you will see a handful of cringe moments that aren’t there for shock value and actually add to the visceral nature of the film. Nick Damici’s portrayal of Mister was well done made you genuinely care about the fate of the character. Connor Paolo’s performance as Martin stood out to me because you can actually see the evolution from scared kid to vampire killer. Of course I can’t forget the strong performances from Kelly McGillis and the always awesome scream queen Danielle Harris . I still remember Danielle in The Last Boy Scout with Bruce Willis. Big budget horror films should take notes because Stake Land shows that you don’t need over the top gore and sex to sell a film. You need engaging characters and solid storytelling which this film definitely had. I regret not being able to attend media day here in NYC for this film because I would have liked to commended the cast for a job well done. I guess this review will do.

Stake Land is not your run of the mill horror film. I recommend it highly if you are a horror fan and appreciate your protagonists and antagonists with a little depth. Jim Mickle and Nick Damici wrote a fantastic story and are definite talents to watch. Look for this film on IFC on demand and check it out. You’ll be glad you did.