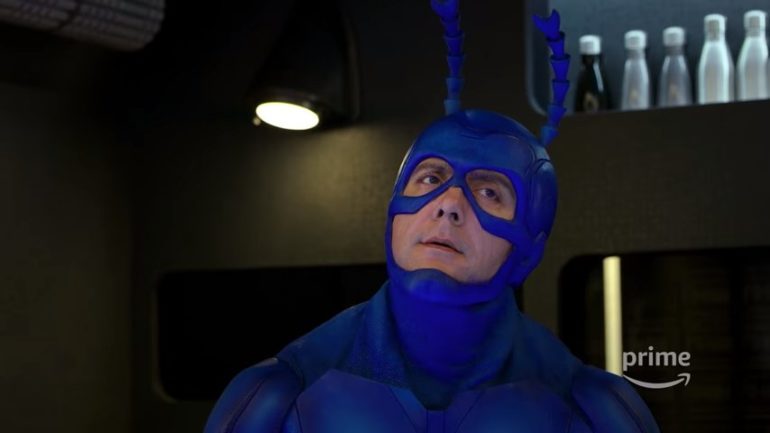 Peter Serafinowicz will return as The Tick and Griffin Newman will reprise his role of Arthur. If you watched the cartoon back in the 90's you will definitely appreciate the work Serafinowicz and Newman put into bringing Arthur and The Tick to life.

The Tick will return with the second half of season one with six additional episodes premiering on February 23, 2018

SEATTLE–(BUSINESS WIRE)–Jan. 17, 2018– (NASDAQ: AMZN) — Hello, Citizens! Amazon Studios today announced it has greenlit a second season of the half-hour superhero series The Tick. The creator of the series Ben Edlund (Firefly, Supernatural, Gotham) will return along with leads Peter Serafinowicz (Guardians of the Galaxy) as The Tick and Griffin Newman (Search Party) as Arthur, with additional casting to be announced. From Amazon Studios and Sony Pictures Television, the second season of The Tick, comprising 10 episodes, will begin production in 2018 and is expected to premiere in 2019 exclusively on Prime Video in over 200 countries exclusively for Prime members.

Neat! As previously announced, Amazon will premiere the highly anticipated second half of The Tick’s first season on February 23, 2018, featuring six all-new episodes of the acclaimed show.

The Tick has received wide critical acclaim and at 93% is Certified Fresh by Rotten Tomatoes. Highlights include:

“The hero we need” – Tim Goodman, The Hollywood Reporter

“Amazon is bringing some welcome wit and warmth to the genre” – Daniel D’Addario, TIME

“[The Tick] is clever and crazy in the right proportions” – Robert Lloyd, Los Angeles Times

“On top of just being a top-notch superhero show, Amazon’s The Tick is so damn refreshing” – Brett White, Decider

“Ben has created a resounding hit while Peter and Griffin have brought Tick and Arthur to indelible life,” said Sharon Yguado, Head of Scripted Series, Amazon Studios. “We can’t wait to bring fans more of the Tick universe soon.”

“I am so excited that Amazon wants to continue this wildly fruitful collaboration and that this amazing cast gets to stay together, and that we get to build this mythos further, wider, deeper, and taller,” said Ben Edlund, series creator, and executive producer. “We got a good ball of mud spinning with the right tilt of axis, I’m very happy we have this opportunity to keep peopling it.”

The Tick also commented on today’s news: “You feel it too, don’t you? Destiny’s warm hand in the small of your back, pushing, pushing. She’s on a roll.”

In a world where superheroes have been real for decades, Arthur (Newman), an accountant with mental health issues and zero powers, comes to suspect his city is owned by a global super-villain, The Terror (Jackie Earle Haley) who has been long thought dead. As Arthur struggles to uncover the conspiracy he falls in league with a strange blue superhero – The Tick (Serafinowicz). They launch into an adventure brimming with crazed arch-villains, blood-soaked vigilantes, and superhuman freakery.

In addition to Prime Video, the Prime membership includes unlimited fast free shipping options across all categories available on Amazon, more than two million songs and thousands of playlists and stations with Prime Music, secure photo storage with Prime Photos, unlimited reading with Prime Reading, unlimited access to a digital audiobook catalogue with Audible Channels for Prime, a rotating selection of free digital games and in-game loot with Twitch Prime, early access to select Lightning Deals, exclusive access and discounts to select items, and more. To sign-up for Prime or to find out more visit: www.amazon.com/prime.

Sony Pictures Television (SPT) is one of the television industry’s leading content providers, producing and distributing programming worldwide in every genre and for every platform. In addition to managing one of the industry’s largest libraries of award-winning feature films, television shows, and formats, SPT is home to a thriving global production business operating 21 wholly-owned or joint venture production companies in 12 countries around the world. Sony Pictures Television is a Sony Pictures Entertainment Company.