Square Enix refuses to relax! Today we have the announcement that Dragon Quest Heroes II will come exclusively to the PlayStation 4 on April 25, 2017. The DQ Heroes franchise pits a combination of four heroes against an onslaught of monsters in a Musou (Dynasty Warriors) type of combat setting. This is still an action RPG, so one must manage weapons, armor and magic as well. 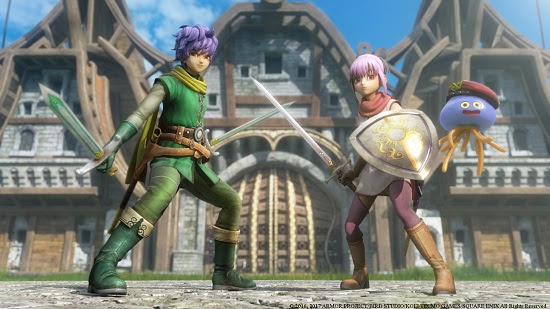 The story revolves around two cousins, Lazarel and Teresa. They reunite in the Kingdom of Harba, both having become knights in training. An old friend is about to betray a peace that has lasted for one thousand years. As the world descends into chaos, the cousins must meet with the Sovereign of the Seven realms. He will know the path they must take to restore order to the world!

Fortunately, the pair will not be alone and neither will you as a player. Just as in the first game, you will meet several allies on your journey. You will also be able to team up online with up to three other players! Forming a strong team will allow you ro tear through the onslaught of evil forces and restore peace to the land. Get ready next year because Dragon Quest Heroes II is coming your way!