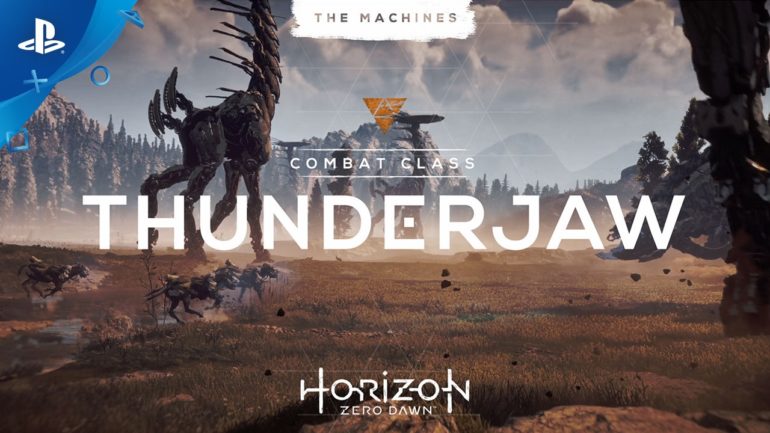 We have seen a lot of Horizon Zero Dawn since its announcement. Now that we are nineteen days away from launch, Guerrilla Games and Sony are giving us a closer look at things we have no business being this close to. We begin with a look at the Thunderjaw. This is the beast we saw Aloy take down in our very first look at the game back at e3. it is probably far from the most dangerous thing found in Horizon Zero Dawn, but it is certainly up there as the video demonstrates.

We follow that walking horror with a look at the Snapmaw. This is considered less of a threat than the Thunderjaw, but anything that is patterend after an alligator is not to be taken lightly. The Snapmaw looks as though it would freeze and crush its foes in an instant. You will not have time to admire its awesome jumping ability if you want to live to see a repeat performance.

The end of the video offers a look at the Stormbird and Behemoth, but the links are not yet active. Stay tuned to R.A.G.E. Works for more news on the game as it develops.

Horizon Zero Dawn is a PlayStation 4 exclusive launching February 28, 2017. It will be enhanced for PS4 Pro owners.