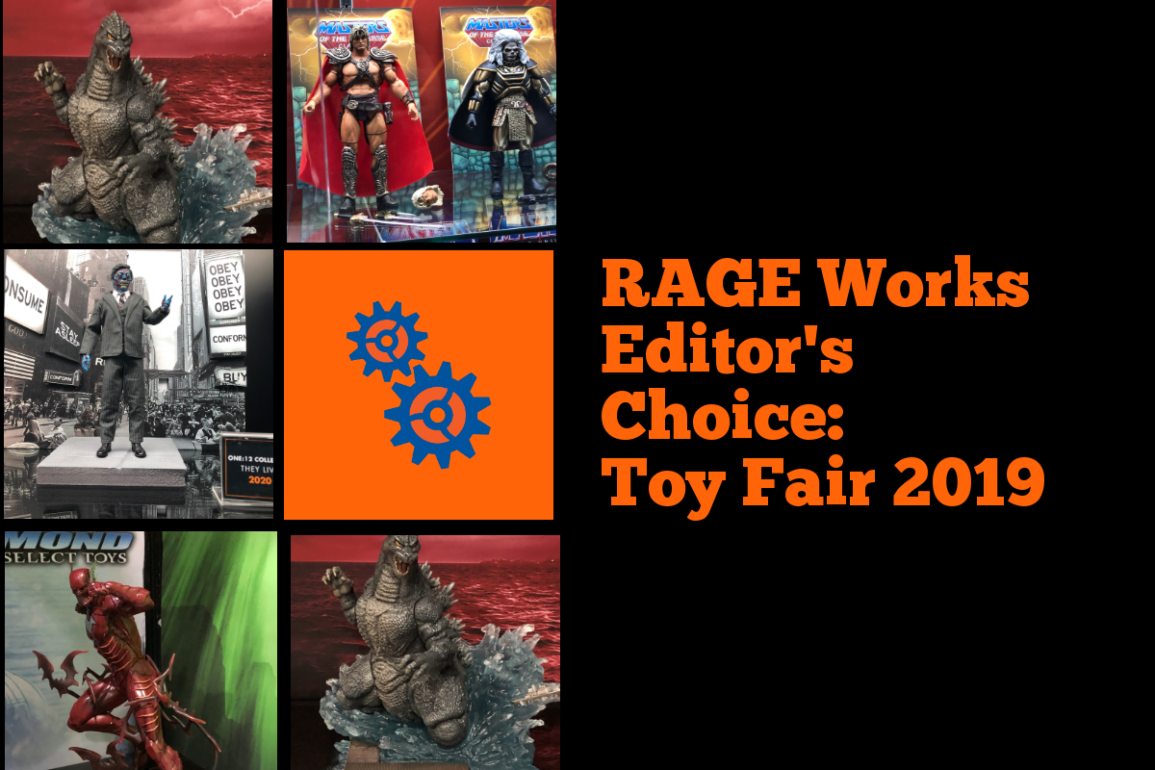 Toy Fair 2019 was another awesome event and while you can check out the various posts relating to individual companies we met with I wanted to spotlight some of my favorites that will be hitting shelves throughout 2019. Enjoy this round-up of favorites.

Mezco's One:12 Collective line continues to create amazing figures based on comic, television and film and this new piece based on the sci-fi classic They Live is perfect in every way. Let's hope we get a Roddy Piper figure to compliment this piece down the line.

Q-Fig hit a home run with this amazing Batman family statue. I was not only impressed by the attention to detail the piece had but by the fact that a piece like this should cost substantially more than the $199 suggested retail price. As a collector of the Q-Fig mini figures, this piece was outstanding.

While the Masters of the Universe movie was forgettable for a multitude of reasons the film did have some highpoints. The original figures from the film are incredibly hard to find so I was really happy to see the folks at Super7 release some of the film's iconic characters including RAGE Works personal favorite Karg.

Our visit to McFarlane Toys was amazing for a few different reasons but seeing McFarlane Toys tackling anime was a welcome surprise. While the company will be doing figures for My Hero Academia the one that got my attention was Saitama from One Punch Man. I recently binge-watched the first season on Netflix and got hooked. This Saitama piece will be a day one purchase for the RAGE Works studio.

When I heard that Hasbro had scored the Power Rangers license I was excited to see what they were going to bring to the table and the first wave of figures from their Lightning Collection did not disappoint. As a huge fan of both the white and green rangers both played by Jason David Frank, I was happy that the white ranger was one of the first figures to debut in this new line. He joins Lord Zedd, SPD Shadow Ranger, Dino Charge Red Ranger and the red ranger from Hasbro's new Power Rangers Beast Morphers series.

Hasbro's Marvel Legends tackles some of the iconic looks of the 90's X-Men action figure line and this new Mr. Sinister jumped out immediately. The figure not only looked impressive but the attention to detail was flawless. If you're a fan of Mr. Sinister this piece is truly a must-have. Look for him alongside X-Force's Boom-Boom and Cannonball as well as Night Crawler.

Storm Collectibles got on my radar at the last year's Toy Fair event and while I was impressed with their figures I had issues with the pricing. Now that I own some figures from Storm Collectibles the quality of the figure justifies the price. These newly revealed King of Fighters figures are outstanding and after the great work, they did on their Rugal figure I may need to pick these up.

When it comes to affordable statues the folks at Diamond are hard to beat. As an owner of several PVC pieces from Diamond Select, I am still blown away by the stuff they come up with. This new Godzilla piece is truly impressive. It has some weight to it and looks amazing alongside the King Ghidorah piece that Diamond Select also had on display.

The Dark Knights Metal series from DC introduced some amazing alternate universe Batmans and while they all had a unique story the one whose design impressed me the most was the Red Death which is a version of Batman with the powers of the Flash. If you have not read Dark Knights Metal I recommend reading it and learning the backstory of this awesome looking character. This Red Death statue is a day one purchase for me.

Feel free to let us know in the comments which collectibles were your favorite and check out all of our other Toy Fair 2019 coverage.