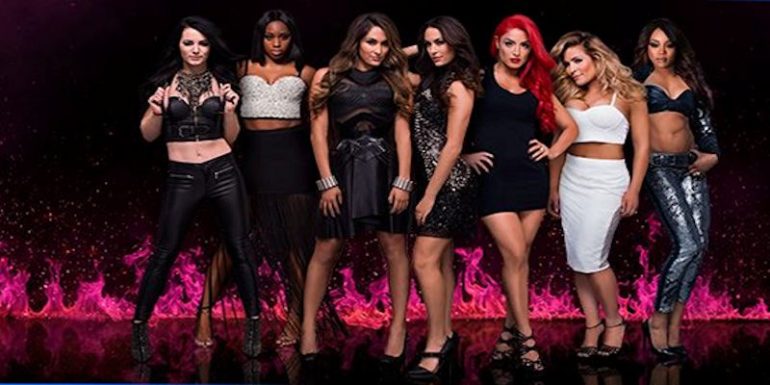 When we last saw the Total Divas during a girls-only trip to Mexico, Paige was (not) happily engaged, Nattie was crazy, the Bellas and their father had some issues, twerking was involved and the girls learned of the unfortunate passing of WWE Legend and Hall of Famer Dusty Rhodes. What could possibly happen next? This sure has been a crazy season, and it hasn't stopped yet! Check out the Total Divas finale this Tuesday, September 29th at 9 PM ET/PT on E! Here's a sneak peak.
[toggles behavior=”toggle”] [toggle title=”Show Press Release”]

LOS ANGELES, CA—This season on Total Divas, we have seen the Divas bring the heat in ways they never have before. Whether it was Brie Bella™ and WWE Superstar Daniel Bryan’s™ fertility issues, Paige’s™ unconventional engagement, Eva Marie’s™ impressive in-ring improvements, or Natalya™ (Nattie) overcoming her father’s substance abuse problems— no stone was left unturned for this eclectic group of Divas. All of this drama combined with Nikki Bella™ reigning supreme over the entire division as Divas Champion has made this season a complete and total knockout!

In the season finale, Nikki, who is currently dating WWE Superstar John Cena™,  finds herself in a bind when her ex-boyfriend WWE Superstar Dolph Zigger™ says he wants her back. Meanwhile, Nattie faces career-ending news for both her and her husband WWE Superstar Tylson Kidd™ (TJ), and Paige debates telling her fiancé her true feelings on their engagement.

The Total Divas season finale will air on Tuesday, September 29 at 9 PM ET/PT only on E!