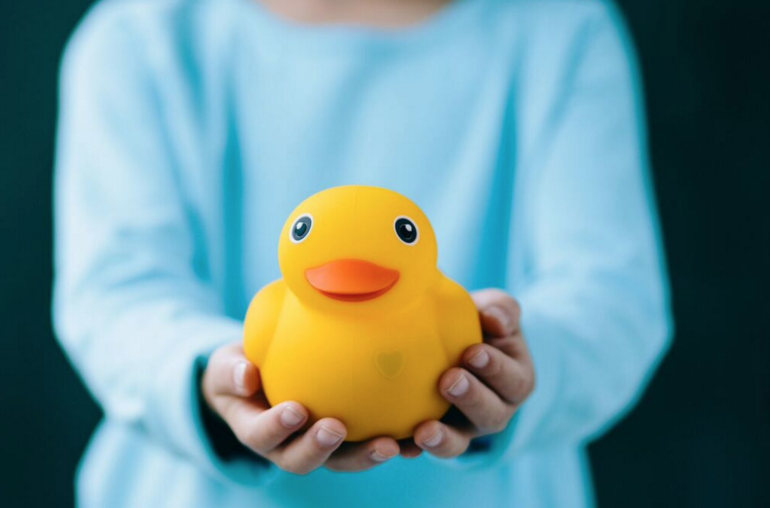 Currently, we live in an age of reinvention and reboots and while some things can evolve alongside technology, there are others whose simplicity and appeal are timeless. There is no better example of such simplicity than a child's rubber duck. This bath time toy has been a staple for children as far back as we can remember. It floats and squeaks and that's it! It is something so simple that you probably never would have thought it could evolve or become better. But that all changed at Toy Fair 2016 when we met Edwin The Duck and saw our little yellow rubber friend evolve into something that can grow alongside your children for years to come.

Sure, while a rubber duck toy is clearly outside our coverage model, the work that was brought to life with Edwin was too cool to not spotlight. So with that said, let's get into what makes Edwin the Duck such an awesome purchase.

Edwin is an app-powered rubber duck that not only can play a soothing lullaby to put your child to sleep (via the built in speaker) but also works as a nightlight, a motion controller for his stories and games, and even a thermometer. Edwin, of course, is waterproof  so he can go from playtime to bath time with ease. Designed to be a friend for years, children will be able to grow with Edwin, as he can be used from ages 1 – 7. Specially designed games and stories will add to your children's learning experience, with a whole lot of fun! (At Toy Fair, we ourselves became slightly obsessed with playing the games available.)

Edwin's slew of apps are available on iOS  for now and  will eventually be released on Android as well per our conversation with Don Inmon, who is the Co-Founder and President of pi lab, who created Edwin. The main app for Edwin can be found currently in Google Play and is compatible with Android Marshmallow devices.

Edwin is currently available to purchase for $99.99 on their website as well as Best Buy and comes with his charging nest, a micro USB cable, a USB wall plug and the “quack” start guide.

The sleepy time and temperature sensing apps use features from the following iOS devices:

The RAGE Works team and I were impressed with all the features pi lab added to Edwin as well as all the additional features and enhancements they have in store for the future. It was amazing to see how pi lab took something so simple as child's rubber duck and evolved it not only into a versatile companion, but a kick ass learning tool as well. We all agree that Edwin was definitely one of the highlights from Toy Fair 2016.