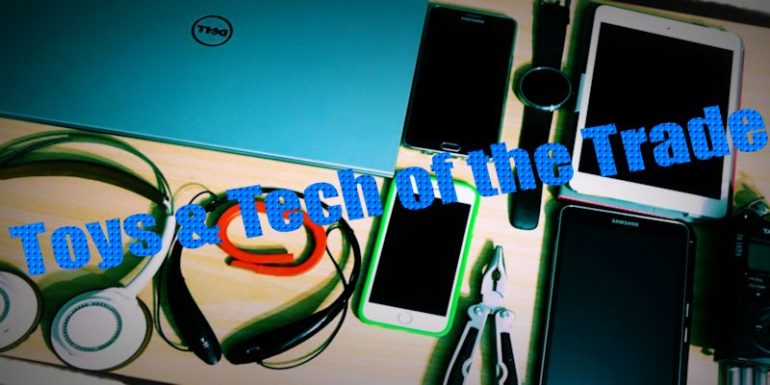 My friendship with Kevin Baird goes back to well before the days of RAGE Works and My Take Radio and it all started with me calling the VGN show which he still hosts to this day. I always say that Kevin and the crew at VGN were big factors in my getting into podcasting. Since those days, we've become close friends and Kevin and Donny have even visited me here in NYC. What started out as a simple listener/host interaction has turned into a great friendship. But, enough with the banter, let's get into Kevin's Toys & Tech of the Trade.

Who are you and what do you do?: Kevin J. Baird – Director of Programming, host of various podcasts and streaming music shows,

Current mobile device: I have two active phones which are the Nokia (Microsoft) Lumia 1520 and the Amazon Fire Phone.

What do you like/dislike the most about your current mobile device?: Well, I bought the Fire Phone when it was being liquidated for $100. I use it primarily as a music streaming device since the cell allows it to be used in the car and because it’s based on a flavor of Android that can use apps like Sirius, as well as Amazon Prime. That said, the phone is discontinued and eventually it won’t work with the apps I need it to work with. However, currently that is not a problem so I’ll continue using it indefinitely.

The Lumia 1520 was Nokia's flagship phone before they folded into Microsoft. It has a 6” screen, a 20mp camera, six microphones (so it records audio incredibly well), a 1080p screen (still pretty rare), and all of the Nokia Lumia apps for free. The downside is that the Windows OS has fewer apps than Android and iOS, which is why the second phone. There is no Sirius app for the Windows phone. There is no Amazon Prime/Music/Video app for the Windows phone. Not to mention many of the popular apps that it does have are more limited in features than the similar apps for other devices.

Three mobile apps you can't live without: I’m not going to say e-mail, SMS, and Facebook because I’m pretty sure that would be on everyone’s list.

TuneIn Radio – Easiest place to find streaming and podcasts. Super fast search, and it’s on every device. Costs nothing.
Wunderlist – Having a synchronized shopping list for the girlfriend and me makes it a lot easier when we can both update what we need and don’t need at the store, in the event either of us stops before the other.
Club Cards – Basically like a wallet app that allows me to remove all those little barcode cards off my keychain and use the app instead. This can be touch and go at some places, but as a whole it works fine.
Show us your home screen:

Current Laptop or desktop: At the office, I have a dual screen Gateway tower PC that is running 32bit Vista. Next to it, I have an HP TouchSmart 520 PC. Next to that, I have a Surface RT.

Most used program/programs on laptop/desktop: At home, it’s probably Steam or some Steam game on the desktops or laptop. At work, Visual Studio 2015 typically.

First place you go when you open your phone or computer: Well, if I have any text messages, I’ll check that first. Then email, then Facebook. But it also depends on the situation. If I’m looking to just play a podcast or music, I’ll head there first.
One website you recommend to people often: Well, I plug my own sites where I can. Recently I started a 24/7 heavy metal radio station (after spending you-don’t-want-to-know-how-much on licensing fees) and put it at www.vgn.us So I have been pointing people there. It’s on TuneIn and Shoutcast. Some of the guys are going to start doing their own shows on the station.
Favorite piece of tech besides your phone/computer: Favorite is tough. I will say that I own a lot of devices for the TV. Fire TV, Roku, Xbox One, PS4, Ouya, a micro HP PC (Forgot to mention that one), GameStick, Wii U, Vita TV, HDHomeRun, Tablo, Tivo, Blu-Ray player, and Chromecast. (I had two Google TV units but retired them.)

Out of all that stuff, I find the Roku to be the best device overall. It is quick, simple, and gets me what I need right away. Everything else is either slow or has problems with one streaming source or another. (It’s a Roku 3) None of these things are perfect, but I find the Roku to be reliable.
What's playing in the background while you work?: VGN Radio (The Metal Show)

What are you playing?: Skyrim, as I never finished it, and I’m attempting to get through it before Fallout 4 and Star Wars Battlefront drop.

Last gaming purchase: Hatoful Boyfriend, but that was to give it away. For myself to play, probably Fallout 4.

What item have you purchased recently that is less than $100 that has made your life easier or more enjoyable: I’m not sure that they make stuff under $100 that follows your criteria. I did buy a really nice weather radio awhile ago. It is programmable, so I can select which weather alerts I want to receive. So, if there is a flood watch in my area and I don’t care about it, it won’t go off. On the other hand, if a tornado has been sighted, it blasts an alert and starts playing the National Weather Service broadcast. Plus, it has regular alarms and gets the regular radio. Very handy, although it can be kind of funny to setup, because there are disaster alerts for all kinds of things that wouldn’t impact me, but they might impact you if you live near an area that has volcanos, mud slides, tsunamis, hurricanes, earthquakes, etc. You have to sit there and say “no” to each one. “Alert for Radiological Hazard?” No… Err… Maybe? “Dam breaking?” No… “Forest Fire?” No… “Avalanche warning?” Nope… “Nuclear Power Plant Alert?” Uh… I hope not? Haha…

Where can people find your work and connect with you?: Facebook, like the rest of the unwashed. Or go to www.VideoGameNews.com which will forward you to the VGN Facebook page. Then just Like the page. That’s it. Easy speasy…