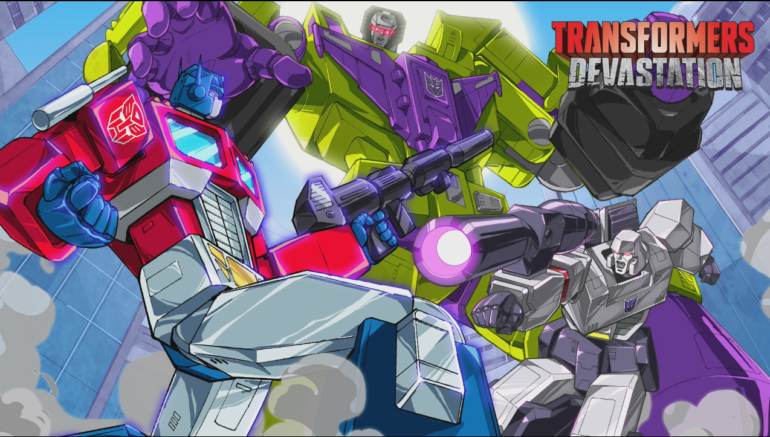 While I appreciated the Saturday morning cartoon vibe of the story in Transformers: Devastation, I felt let down as the campaign progressed. Seeing the same repetitive stages and throw away “drones”  added to my campaign disappointment.

The voice work was stellar and I genuinely missed hearing the late Chris Latta bring Starscream to life. The campaign, with straight playthrough, can be completed in 6-7 hours omitting the challenge missions which with a deep mythos like Transformers was  a bit of a letdown. I think fans would have enjoyed playing the game as the Decepticons as a bonus which is something that Fall of Cybertron offered and helped extend the playtime of that title. Who wouldn't have wanted to use Starscream, Soundwave, and Megatron? I felt they dropped the ball with something so obvious. While there was a fair share of gripes, I cannot deny the fact that there were plenty of moments where the inner kid in me appreciated what Platinum Games had accomplished.

The cell-shaded graphics was one of the high points of the game and it truly looked like a cartoon come to life. The colors were vibrant and the overall look of the game was truly impressive thanks to the cell-shaded style.

The controls were easy to pick up and play and the only real learning curve came from learning how to time the dodge moments to counterattack. Once you have the timing down, you'll be scrapping Decepticons in no time. The Autobots were controlled the same for the most part with the obvious differences being in their attacks. You'll play as Prime, Bumblebee, Wheeljack, Sideswipe and of course Grimlock. (This needs more Ironhide and Dinobots.)

Transformers: Devastation relies on a healthy mix of fast paced melee combos coupled with some less than stellar shooting to create a fun and mildly challenging experience.  Check out the clip below to see how the counter system works.

The weapon upgrade system was a nice touch and while great for boosting your weapons, it did feel unnecessary and honestly not needed. But, you do need something to spend the loot you collect throughout the campaign.

While I am sure an online component would have been fun with the G1 cast I don't think it hurts this title since the it is more about enjoying the game overall. It would be interesting to see what they do in a future installment.

Transformers: Devastation is a solid homage to the G1 Transformers universe and while the short campaign bothered me I think it was because I did not want the game to end, which in the grand scheme of things is good. If you opt to replay the game on a on higher difficulty level, you can at least unlock two harder levels of difficulty to challenge yourself. For those of you that love achievements and trophy hunting you'll definitely get your money's worth. Transformers: Devastation on the surface is a simplistic game that delivers not only fan service but a share of exciting moments that just look cool on screen so as cliche as it sounds, it truly is more than meets the eye. (I had to get that in here somewhere.) We can only hope that TF:D succeeds because I know the team at Platinum Games is only scratching the surface with G1. I  recommend Transformer fans give the game a shot and enjoy the trip down memory lane.