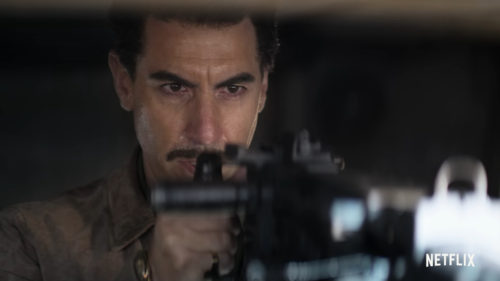 Sacha Baron Cohen ditches the laughs as Bruno, Borat, and Ali G and gets serious in the first trailer for The Spy airing on Netflix.

Plot Synopsis: The Spy is based on the true story of Mossad agent Eli Cohen who went deep undercover in Syria and the challenges he faces balancing his cover identity and his real identity all while trying to protect Israel's interests.

1st Impression: When you look at Sacha Baron Cohen's film and television resume you see a lot of comedy and a lot of memorable characters including Erran Morad the Mossad agent from Who is America. In The Spy Cohen plays a Mossad agent once more but this time it is not for laughs but to tell a story of espionage and internal conflict.

Cohen portrays Mossad operative Eli Cohen who was tasked with going undercover in Syria to establish relationships with prominent figures who were a threat to Israeli interests. Cohen brings real presence to the role of Eli Cohen and the trailer definitely showed that with the right story Cohen's talent go beyond just making viewers laugh.

I look forward to checking out The Spy when it airs on Netflix on September 6. What did you think of the trailer? Let us know in the comments.