Own Your Very Own Assassin’s Creed Unity Phantom Blade 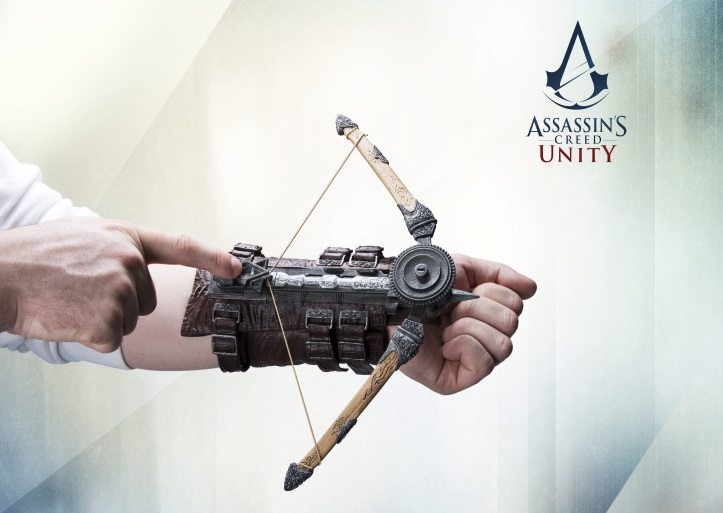 For more information on the Assassin’s Creed Unity Phantom Blade, including a list of retailers, please visit assassinscreed.com/phantomblade and facebook.com/assassinscreed.

Just in time for Halloween, the Phantom Blade comes equipped with a functional hidden blade, retractable crossbow and firing dart. The Phantom Blade is meticulously crafted from a design by McFarlane Toys and includes adjustable straps to fit most sizes. It is constructed out of thermoplastic and safety tested for actual use, age 17+. A replica of Arno’s signature weapon in Assassin’s Creed Unity, this is a must-have for Assassin’s Creed fans.

Set in a once-magnificent Paris, Assassin’s Creed Unity plunges into the terror of the French Revolution and features the most dense and immersive Assassin’s Creed city ever created. Throughout the streets of Paris, the starving inhabitants are set to take up arms for freedom and equality. In this time of chaos and brutality, a young man named Arno, wounded by the loss of those he loved, sets out on a deadly path of redemption. Arno’s pursuit throws him into the middle of a ruthless struggle for the fate of a nation and transforms him into a true Master Assassin.

For more information on the Assassin’s Creed Unity Phantom Blade, including a list of retailers, please visit assassinscreed.com/phantomblade and facebook.com/assassinscreed.

ABOUT UBISOFT
Ubisoft is a leading creator, publisher and distributor of interactive entertainment and services, with a rich portfolio of world-renowned brands, including Assassin’s Creed, Just Dance, Tom Clancy’s video game series, Rayman, Far Cry and Watch Dogs. The teams throughout Ubisoft’s worldwide network of studios and business offices are committed to delivering original and memorable gaming experiences across all popular platforms, including consoles, mobile phones, tablets and PCs. For the 2013–14 fiscal year, Ubisoft generated sales of €1,007 million. To learn more, please visit www.ubisoftgroup.com.

Grammy-and Emmy-winning producer/director Todd McFarlane creator of Spawn is the creative force behind McFarlane Toys, one of America’s top action figure manufacturers. The company develops and brings to market action figures and  statues based on leading entertainment properties including the Assassin’s Creed franchise. McFarlane Toys has become a leader and redefined the standards within the action figure industry. For complete information on this pop-culture powerhouse, visit www.McFarlane.com;https://www.facebook.com/mcfarlanetoys and https://instagram.com/mcfarlane_toys_official