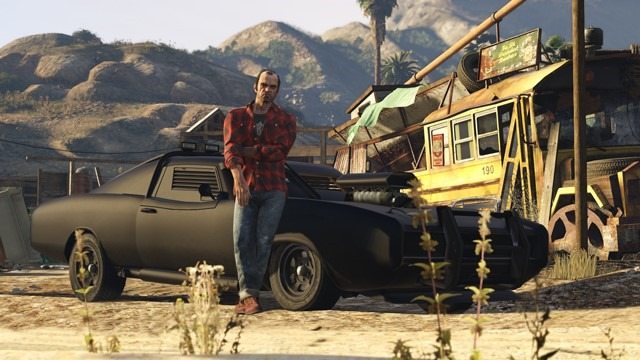 “the Grand Theft Auto V is Rockstar Games’ biggest hit to date and it shows no real sign of slowing down as the online community continues to thrive over a year after the game’s initial release. Last year’s release left me with a huge question mark over my head and those of many fans. Grand Theft Auto V launched two months before Sony and Microsoft released their new consoles. It even launched with a special PS3 bundle. The question that I pondered was why, especially with their renewed relations with Sony, Rockstar did not just wait a few months and release this title for the (then) next-generation consoles? The answer was simple: money. Back when the game first launched there were supposedly no plans to bring the game to PS4 and Xbox One and the PC version was “slated for future release.” We found that to be a hoax early on in 2014 as the game was slated to be re-released on the new consoles and make its PC debut later on in 2014. Today, we stand exactly three weeks away from the console re-release on PS4 and Xbox One (PC players have to wait until January 27, 2015) and yet another question mark hangs over the heads of fans (myself included):

“Why the hell would I shell out another $60 for a game I have not only played, but beaten and satisfactorily completed?”

Clearly, there will be PlayStation 4 and Xbox One owners that have never played Grand Theft Auto V, but those people either will not play it on their new console or the ones that will represent a very small percentage of the respective communities. So there has to be something that will entice previous owners to re-buy this game because as a hardcore fan, I will tell you that extra music, Hammerhead Sharks and Orcas are not the answer. Rockstar knows this too, so once again, they stepped their game up.

Personally, I would have asked for more story mode content (actual story). I would have especially liked to have more playable backstory on Franklin. Unfortunately (for me), I did not get the gig as Rockstar’s story consultant. Regardless, those who purchase Grand Theft Auto V on Tuesday, November 18 (or in January for PC owners), will get a lot more for their $60 by comparison to those who initially bought the game. The content from all of the updates over the past year will be there along with all of the Rockstar Verified missions. That is just for those who pick up the new version. If you played the game on the PS3 or Xbox 360, you can import your online data (one time only) to the new console or PC version. Yes, this does mean that your hacked level 944 character will move to the new system if Rockstar has not already got a hold of your cheating ass! It also means that whatever special content that you have unlocked will be imported to the new game as well. I am unsure how this will effect trophies/achievements like “Above the Law” or “Numero Uno” as many of us have will have met the requirements for trophies like these just by importing our game. Hopefully, Rockstar has made a new set of trophies for the game, more on that as news develops.

Some might say “so what?” to the above description of what returning players will get. Rockstar realizes that and took things even further. Aside from the obvious graphical overhaul that can be seen in the new trailers, players who import their old console data to the new version will be rewarded with new events and activities that will unlock even more toys for them to play with. Vehicles like the nigh-indestructible Imponte Duke O’Death and the previously clipped Dodo of GTAIII fame can be yours for the small price of mass carnage.

If you solved the story mode murder mystery by collecting all of the letter scraps, you probably wondered why you wasted all that time for a reward that was non-existent. Rockstar has not made it clear if this will be the same mystery, but if you solve the new version, you get Noir filters usable in story mode and with your Snapmatic App on your cel. Hey, it’s still better than the nothing you got last time!

Back to the good ‘ol ultra-violence! Fans of Dead Island or Rockstar’s own Red Dead Redemption will love to get hands on (or take hands off) with the new hatchet and I personally cannot wait to get my hands on the new rail gun, which will definitely hit the weak spot for massive damage if Rockstar implements it properly.

Going underwater was not as cool as it should have been in Grand Theft Auto V. Sharks would generally show up at the worst time, and the only time you did not have to worry about them was when you were in the submarine – aka, the Ford Pinto of all submersibles. It was slow and never stayed where you left it. You also had to purchase a rather expensive property to unlock it. This time around, you will just have to finish the Wildlife Photography Challenge (which might be easier said than done) and you’ll be able to release the Kraken Sub. It definitely looks beefier than its predecessor. Let’s hope it packs some weapons and/or can at least stay in place when you get out underwater.

What’s that rash on your neck? Oh, it’s not a rash, it’s . . . Oh gosh, I am sorry! I am so embarrassed. Well, if you like Stock Car racing and Monster Trucks it might be SUNDAY! SUNDAY! SUNDAY! and you just might be a redneck. Or just a resident of Blaine County, same difference, bless your heart! Along with the regular street races are new Stock Car Races that will unlock Muscle cars with liveries from companies represented in the game like Redwood Cigarettes.

The Cheval Marshall will make you feel like a big man as you roll over the police and whoever else is in your way. Previously unlockable with the Independence Day update, this baby is here to stay and it will be the first time a monster truck has been readily available in a GTA since the last adventure in San Andreas.

Those who pre-ordered Grand Theft Auto V for last-gen consoles got the Atomic Blimp as a bonus along with a few free weapons. Those weapons and the blimp will still be there, but now the much faster Xero Blimp will be available to those who upgrade from previous versions. Let’s also not forget that those who pre-order the new version will receive $1M in cash split between their story mode and online personae. Unless the story has changed, that means that Franklin will start with a cool half-mil to use on assassination missions and the like. I would guess that Michael and Trevor will also get the bonus, but there is no confirmation on that as yet.

For full details on what the PC/PS4/X1 version of the game has to offer, please see the Rockstar Newswire article for full details. The article also has a FAQ section regarding many of the questions you may have.