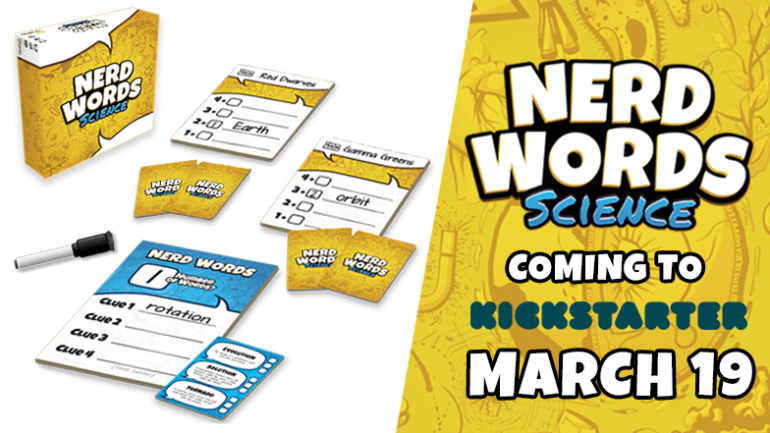 If you checked out the latest episode of Toys & Tech of the Trade then you probably heard about Genius Games next game Nerd Words: Science! Genius Games launched the Kickstarter campaign for the game today. Learn more about the game including how to contribute to the Kickstarter via the press release below.

ST. LOUIS (March 19, 2019) – The fun is in the clues! Gather friends together, select teams, and compete against each other to give clues and correctly guess secret Science Terms in this new science-based word game. Genius Games has pioneered the science-meets-tabletop-gaming genre and is the only board game publisher in the world focused on creating scientifically accurate strategy tabletop games. Now, they're excited to announce their latest product offering, Nerd Words: Science!

Beginning March 19, Genius Games will launch their twelfth Kickstarter campaign to introduce geeks and gamers alike to Nerd Words: Science! – a social word game where players work in teams to solve clues. Nerd Words: Science! will be on store shelves for the 2019 holiday shopping season for $29.99. For more details about the game and testimonials, visit https://www.kickstarter.com/projects/geniusgames/nerd-words-science-a-party-game-meets-real-science where you can also back the project and receive a copy of the game for a discounted price.

“This is an exciting time for Genius Games as we prepare to release our very first science-based word game, Nerd Words: Science!,” noted John Coveyou, founder and CEO of Genius Games. “There are many party games in the marketplace, but Nerd Words will be the first to blend real science with a fun experience at the gaming table. You can play it with your friends at game night, with your family, or even in the classroom, and everyone will have a blast… and even learn some science terminology along the way.”

Nerd Words: Science! is a word game where teams pit their wits (and some science knowledge) against each other with the goal of figuring out Secret Science Terms based on Clues given to them. In each round, the lead scientist chooses a Term from a hidden pool of science words. They then reveal a series of Clues associated with the Science Terms. The first three Clues must begin with a different letter in the Science Term other than the first letter, slowly spelling out the Science Term as well as hinting at the content of the Term. If neither team has figured out the Science Term, the fourth and final Clue will begin with the first letter of the Term as a last ditch effort! After each Clue, both teams have 60 seconds to submit a Guess and place a bet based upon how confident they are in their Guess. Each team to correctly guess the Science Term scores points based on their bet and the team with the most points at the end of the game wins!

“The Nerd Words: Science! crowdfunding campaign will have built-in stretch goals that will add to the complexity and fun of the final game that includes component upgrades and special ‘topic’ packs of new Science Terms, including earth science, astronomy, and medicine that players can add into the game,” added Genius Games’ Coveyou.

Genius Games products can be found at major hobby game and retail stores throughout North America including Beyond the Board, Dragon’s Lair Comics and Games, Game Haven, Heroic Gaming and at Sentry Box in Canada.

About Genius Games
St. Louis, Missouri based Genius Games was founded by John Coveyou in 2014. Genius Games is one of the only tabletop game publishers with a focus on creating engaging board games that are accurately themed around STEM subjects. For more information, please visit www.geniusgames.org.
About John Coveyou
John Coveyou, creator and designer of Nerd Words: Science!, nearly dropped out of school in his teen years and spent a stint living out of his car. However, after serving in the military, he pursued his love of science at Washington University, earning his Masters in Energy, Environmental and Chemical Engineering. He later quit his posh engineering job to launch Genius Games in 2014. He now teaches courses on Game Design and Crowdfunding at Webster University in St. Louis along with running Genius Games full time.
Nerd Words: Science! is the ninth science-based game created by Coveyou. His previous Kickstarter campaigns have been very well-received and were wildly successful, collectively raising more than $1.3 million. Coveyou's games have received attention from scientists and gamers alike and include accolades and coverage from media influencers such as Popular Science, Scientific American, the National Science Teacher's Association, The Dice Tower, and Gizmodo. Coveyou also published My First Science Textbooks and Science Wide Open, science storybooks for kids, both of which are still in the Top 10 most funded children's book campaigns of all time on Kickstarter. Additionally, the company’s most recent Kickstarter campaign for Human Anatomy Jigsaw Puzzles is the most funded jigsaw puzzle on the crowdfunding platform.