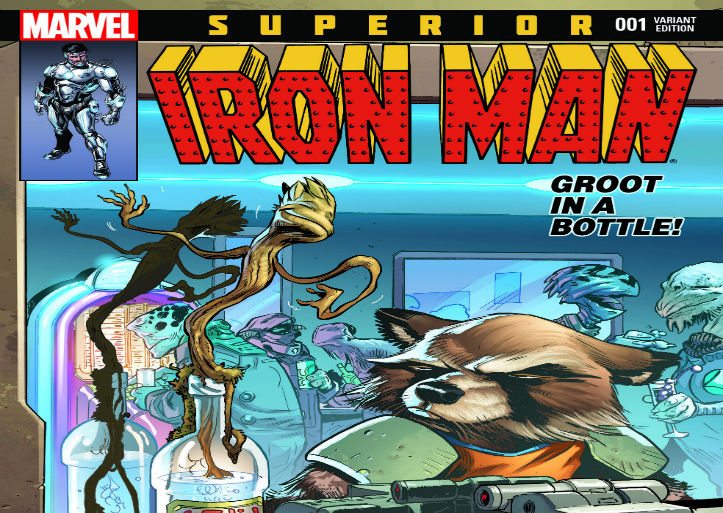 Groot and Rocket Raccoon have got a lot of buzz lately largely in part to the success of the Guardians of the Galaxy film. They have been showcased in both solo stories and the Guardians of the Galaxy series but Marvel will be taking it a step further this November as they invade the variant covers of some of your favorite Marvel titles. I like that Marvel is showcasing  Groot and Rocket on a broader scale because their stories are good. I hope Marvel continues focusing on their cosmic heroes because there are a few with great stories that play a larger role in the Marvel universe. Check out the variants below.

Which cover is your favorite? Let's hear it in the comments

New York, NY – September 17th, 2014 – The breakout comic book characters of the year are taking over the covers of your favorite Marvel titles this November! That’s right True Believer, ROCKET RACCOON & GROOT VARIANTS are coming, featuring some of the best and brightest talents in the industry! Not only will you get to see so many great artists putting their own spin on Rocket & Groot, but 20 of your favorite Marvel comics will feature these one-of-a-kind variants depicting some of the most classic of covers!

“People everywhere can’t seem to get enough Rocket & Groot!” says Marvel SVP Sales & Marketing David Gabriel. “As soon as we came up with the concept to do Rocket Raccoon & Groot variants, the ideas just started pouring in. We couldn’t wait to get our hands dirty creating some really fantastic cover homages. This program is really the best of both worlds and we know it will really excite old and new fans everywhere.”

Marvel urges retailers to check their orders on these hotly anticipated variant covers as they hit comic shelves through the month of November. No fan will want to miss the chance to see these fan-favorite Marvel characters in a whole new way when the ROCKET RACCOON & GROOT VARIANTS hit store shelves worldwide this November!