Hascon Sights and Sounds: My Little Pony: The Movie 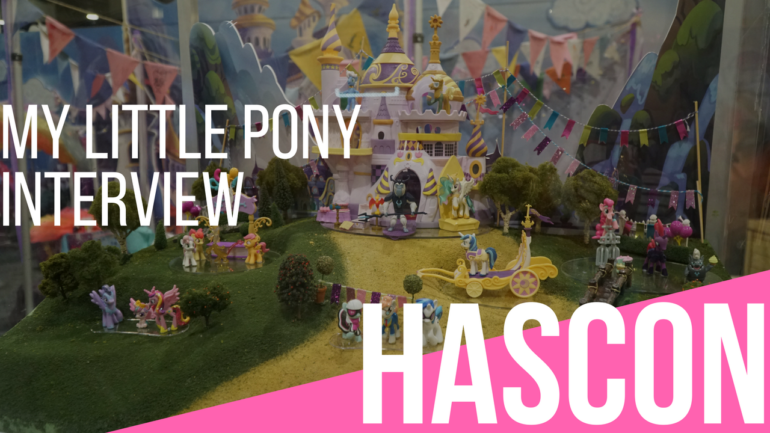 If you'd ask me to describe both ladies after our conversations, the first word that comes to mind is passionate. Both Tyla and Meghan have an infectious passion for the My Little Pony brand and for its characters. We all grew up with My Little Pony, and they are both incredibly proud to be bringing it back to the forefront for the masses today. I use the term “masses” because its grip is not only on little girls but adults as well.

Now in its seventh season, My Little Pony: Friendship is Magic is a worldwide sensation, bringing both young and old fans to Equestria for the adventures of the Mane Six – Twilight Sparkle, Rainbow Dash, Rarity, Pinkie Pie, Fluttershy, and Applejack. Since 2010’s first season of the Friendship is Magic series, people have been enamored with these ponies – and boy, there are no signs of it stopping!

My Little Pony: The Movie is set to gallop into theatres on October 6th, and the excitement couldn’t be greater. On top of the Mane Six, who are voiced by Tara Strong (Twilight Sparkle), Andrea Libman (Pinkie Pie & Fluttershy), Ashleigh Ball (Rainbow Dash & Applejack) and Tabitha St. Germain (Rarity); there is a stellar cast for the movie, including the likes of Emily Blunt, Kristin Chenoweth, Liev Schreiber, Michael Peña, Sia, Taye Diggs, Uzo Aduba and Zoe Saldana. 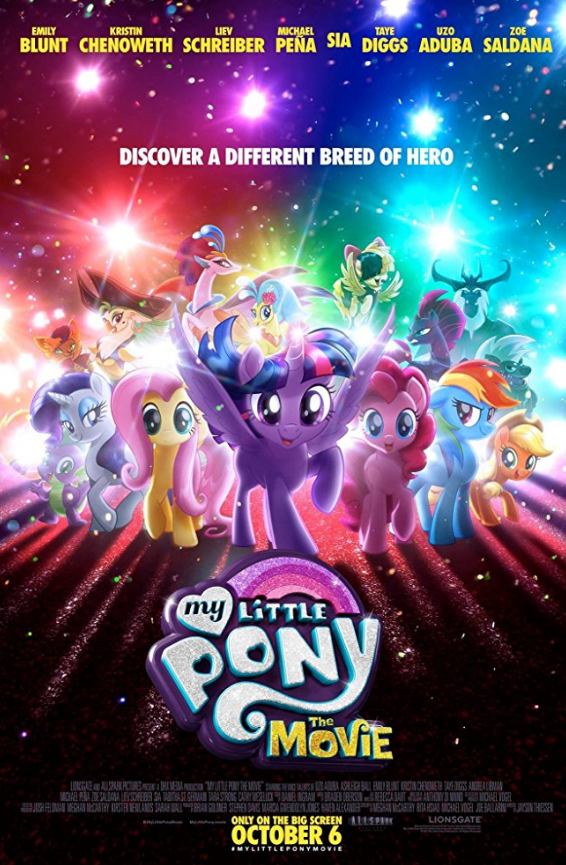 At the My Little Pony area at Hascon, we got to see some of the merchandise out for the movie (including a fantastic glittery Pinkie Pie Sea Pony that I must have). 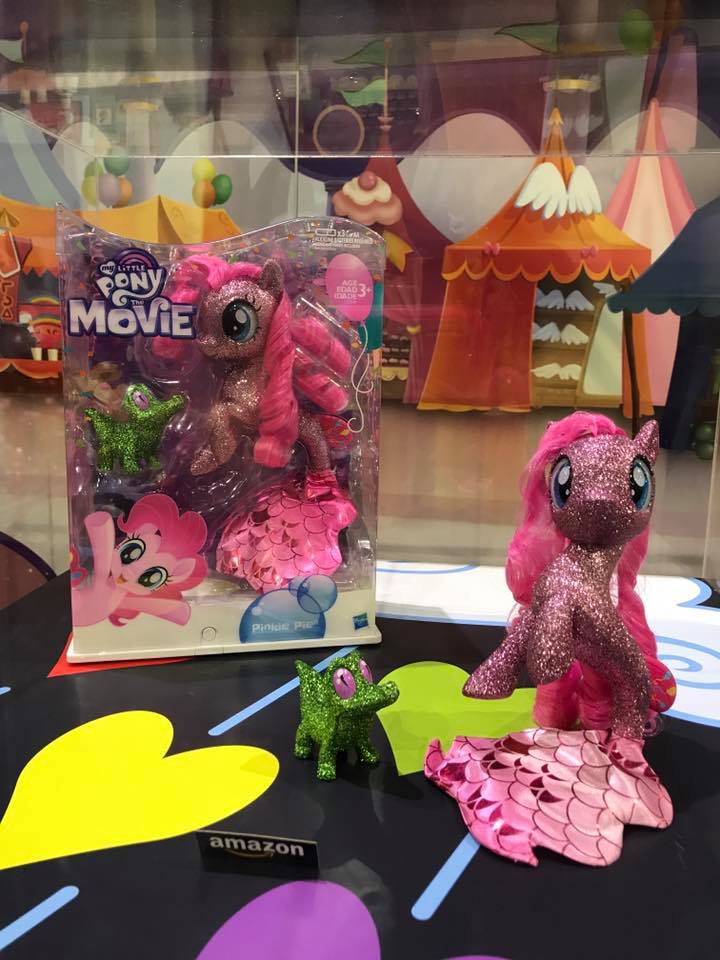 There’s even a nail polish line out by China Glaze with some great lacquer colors to ponify your fingers! Little girls were lined up in droves to get ponified like their favorite character, play games and watch some episodes from the series. It was a great experience for anyone that loves the My Little Pony world. 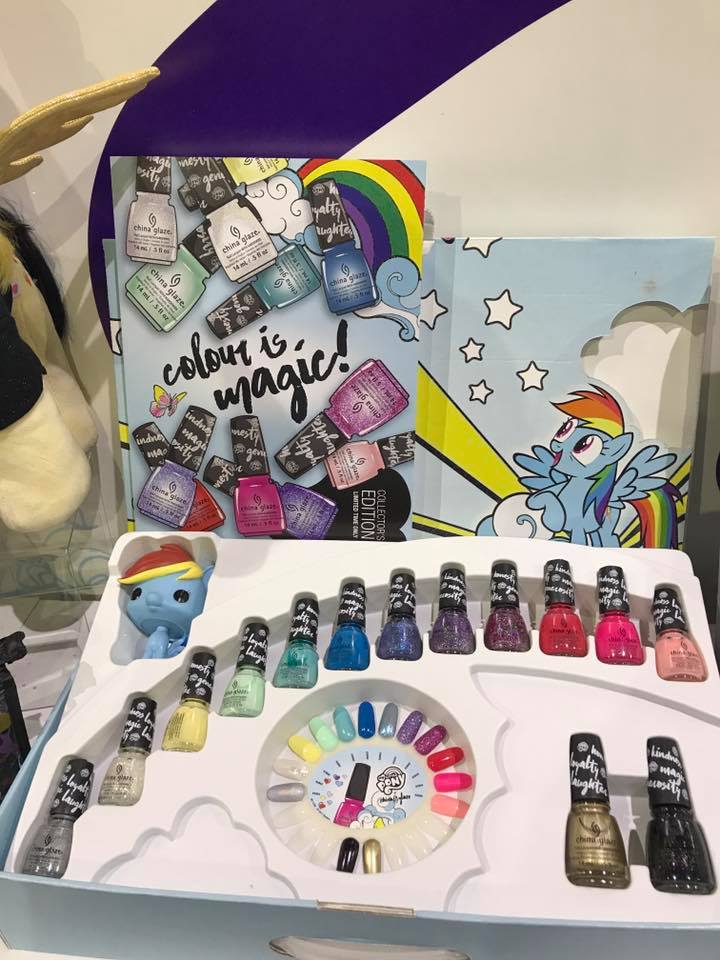 Read on to see what Tyla and Meghan had to say about the My Little Pony phenomenon, as well as their thoughts on the upcoming movie. (Maybe you will find out who their favorite pony is too!)

Andrea: I am here at Hascon with Tyla Bucher, Vice President of Global Brand Marketing for My Little Pony. Tyla, I know the buzz for this movie is very high. What's your goal for My Little Pony: The Movie on the big screen? What do you hope to get out of it on a larger scale?

Tyla: That’s a great question. I think there's something really special about this time in the life of a brand where it really gets ready for its debut on the big screen and so what we're really hoping is that we have the opportunity to bring to it a whole new group of people that have never seen My Little Pony before. It [the movie] was very mindfully created that if you know everything about the Pony brand you will see things in the movie that totally resonate with you, characters that you know, things you may have wanted to see and haven't seen in the series and if you're new to the brand you can meet the Mane Six and go on a journey with them in a completely new way. So I think for us, it's just to be able to really take the brand to the next level and introduce it to a brand new audience.

Andrea: That’s great! In addition to a brand new audience, how do you deal with the Bronies in the world? Did you expect to get such a high male demographic interest?

Tyla: Oh yeah. I mean, I think honestly when you when you take a step back and you think about universal tenets behind brands, friendship is something that everybody can get behind and it resonates with everybody and I think we have such a diverse fan base around the world. We have young and old, we have moms from the 80's, dads from the 80's, new fans, old fans and I think we embrace our fan base wherever they are because everyone at the end of the day is brought to the brand for I think the same thing  – and that is for inclusivity, fun, humor, adventure and being better together. So I think that resonates with a really, really wide broad audience.

Andrea: Absolutely. I’m an 80’s baby myself, so I understand the appeal. What was the initial thought process in wanting to take the ponies from the TV screen to the big screen on such a large scale?

Tyla: The brand is at a place in its life where we have broadcast in 193 countries, we're in our seventh season of the show. We have had so many adventures that the ponies have been on and we really had a conversation about what is the next thing for this brand and then it just came to the fact that it is the right time to bring the ponies outside of Equestria for the first time and have them really go on a big scale adventure. Everything sort of fell together perfectly, we had our studio ready to make something big with this brand and we really felt like the timing was right too because we are at such a great point in our brand's history. So that was really the impetus for us. If we could tell a story that we are not able to tell in twenty-two minutes then now is the time, so how do we do that? Well, it's has to be a movie. So then we went to work, asking “what does that look like”, “what does that story tell” and “where does that get us”?

Tyla: I get so excited.

Andrea: There is such a great cast in this movie. How excited are you to have the likes of Kristin Chenoweth and the rest of the cast? I love Kristin Chenoweth – she’s so unbelievable! And to have Sia in there? It's going to be great. Who you most looking forward to watching?

Tyla: Oh my God, that's so hard to say, but one thing I will say is the total surprise at how they all sing. Almost every person in the movie has a song and they have done just an absolutely fabulous job. They will surprise you with how well they all can sing and how much they just became these characters, how they just bring them to life. Then we have our main cast that are also bringing their characters from the TV screen to the big screen in this whole new way. It's pretty impressive how everybody just came together to embrace these characters and then brought them all to life in their own way with just their voice.

Andrea: Great, thank you for taking the time to meet with us Tyla.

Tyla: Yes, it was my pleasure.

Andrea: Alright! Next up, we are with Megan McCarthy – Head of Storytelling for My Little Pony.  Meghan, thanks for taking the time to be with us as well.

Meghan: Yes sure. Absolutely my pleasure.

Andrea:  I am a huge My Little Pony fan, along with millions of girls across the world and I know you are the writer for the show. How long was the writing process for this new movie?

Meghan: I started working on this movie before Season 5 of the [Friendship is Magic] show and we are airing Season 7 right now, and I've already been writing Season 8; so three seasons of the TV show for one movie.

Andrea: Wow. That’s a really long time. So, in other words, you can't wait to finally see it come out on the big screen!

Andrea: How did you approach writing a feature film as opposed to a twenty-two-minute episode?

Meghan: I've have had experience writing feature-length material before. So, it is a different process just from a screenwriting perspective of how much time you have, you know, to tell a story. But I think for us, it was really important to find a story we haven't told before, in a new way with these characters that we already have told a hundred-plus episodes with and really trying figure how to challenge them in a way that would be worthy of that experience and I think we pulled it off.

Andrea: I think it looks like you will. How do you feel about this all-star cast? Do you feel they did a great job in bringing your words and your vision to the big screen?

Meghan: Yeah it was amazing. You know, we had people in mind and they all said yes and we are all thrilled. It's really great because, you know, we have this amazing voice cast of the Mane Six that has been with us all along. They raise the bar because their performances have been so great and all our guest stars that came in just brought their A game. None of them were like “ok here’s my line…bye”. They really were thoughtful about the characters and asked questions about the characters and had their own choices about the characters, there might have even been things that weren’t on the page or we might not have put them a certain way. They were giving nuances to their performances that we would get really excited about, which would influence us and influence the animators as well to up their acting and not just their animation. So, it was great, Michael Pena was amazing. That guy, he just kinda stuck in the booth and would say “just wait for a minute” and he just goes off for like twenty minutes with all these amazing really funny lines so it was beyond our wildest dreams.

Andrea: Awesome! Are you hoping for any additional My Little Pony movies or is there anything in the works yet?

Meghan: I mean, hopefully everybody will go and see this one and then they'll let me make another one, because it's been great. Yeah, it turned out really well. I think people are going to be really pleased with it. I think we'll get a lot of people showing up to see it and yeah, I mean, who knows what the future holds but I would certainly hope so because it's been a joy to work on this film.

Don’t forget to head to theaters on October 6th to check out My Little Pony: The Movie! I know I will be there.

I’d like to thank both Tyla Bucher and Meghan McCarthy for taking the time out of their extremely busy Hascon event to meet with us.