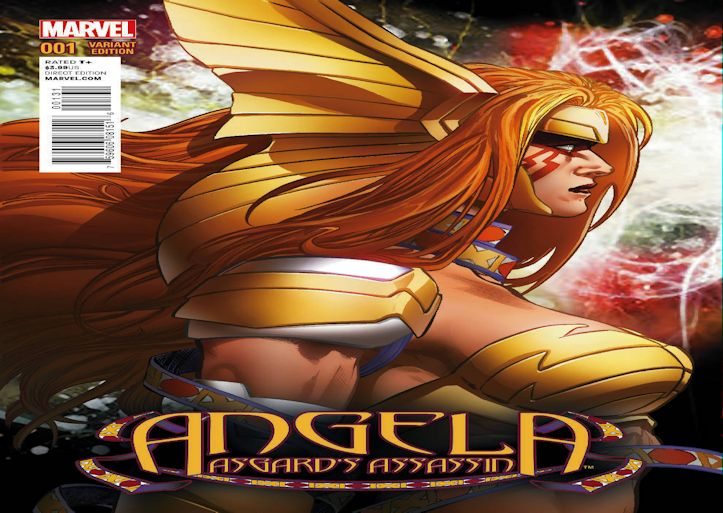 Angela has come a long way from the days of hunting Spawn in the Image universe. Now that she is a member of the Marvel universe her origins have been fleshed out rather well. We now know that she is the daughter of Odin and the sister of Thor and of course Asgardian but even with all those revelations she is remains not only an outcast of Tenth Realm but in essence an outlaw who must still find her place in the larger Marvel universe. While Angela's use in the Image universe was primary alongside Spawn it looks like Marvel is going to be making use of the character on a larger scale. I've liked what they have done with the character so far. I'm willing to give Angela's solo run a shot to see how much more they expand her origin.

She’s deadly. She’s dangerous. And she’s getting her own solo series this December! Today, Marvel is pleased to present your first look at ANGELA: ASGARD’S ASSASSIN #1, the explosive new ongoing series debuting this December! Launching as part of Avengers NOW!, the star-studded creative team of Kieron Gillen, Marguerite Bennett, Phil Jimenez and Stephanie Hans will show you a side of Angela you’ve never seen before, as she cuts a bloody path across the new and unfamiliar Marvel Universe!

The finest warrior in the Tenth Realm, she has been raised to hate Asgard with every fiber of her being. Training, preparing and waiting for the day when the war between Asgard and Heven would begin again. But following the events of Original Sin: Thor & Loki –The Tenth Realm, she must confront her true lineage. She is Odin’s daughter. Thor’s sister. Asgardian…

“The story is Angela is basically on the run,” says Kieron Gillen in an interview with Marvel.com. “It gives her a chance to interact with a lot of different people so by the end of the first arc we really get a sense of who Angela is vis-à-vis the Marvel Universe. You get a sense of who she is and where she fits into the larger picture.”

As the Marvel Universe’s newest star prepares to make her solo debut, no fan can afford to miss the bombastic adventures of the angelic warrior when ANGELA: ASGARD’S ASSASSIN #1 explodes into comic shops and digital devices this December!

For more on Angela: Asgard’s Assassin & Avengers NOW!, please visit www.marvel.com. Join the conversation on Twitter with hashtag #AvengersNOW and don’t forget to follow us at @Marvel [www.twitter.com/Marvel]!