My Take On: Dark Shadows

In 1752, Joshua and Naomi Collins sail from Liverpool, England to North America. Their son, Barnabas, grows up to be a wealthy playboy in Collinsport, Maine and is the master of Collinwood Manor. He breaks the heart of a witch, Angelique Bouchard (Eva Green), who then kills his parents and curses his family. She also causes his next lover, Josette du Pres, to leap to her death from a nearby cliff. Distraught, Barnabus tries to commit suicide by leaping to the rocks after her. But instead of dying there next to his love, Angelique turns Barnabas into a vampire and buries him alive in a chained coffin in the woods to continue his torture. 200 years later in 1972, Barnabas is accidentally freed from his coffin by a group of construction workers. Barnabas returns to his former home to find it inhabited by his current Collins descendants ( Michelle Pfeiffer, Chloe Grace Moretz, Gulliver McGrath), who he embraces as his new family. With their help, Barnabas intends to restore honor and nobility to the Collins name, which has long since been tarnished. Unfortunately for Barnabas though, he is not the only one who has remained immortal, as the woman who cursed him has solidified her place in the town his family helped build. Barnabas must not only contend with adapting to the 70's but also with the advances of his former lover, who's mastery of witchcraft has made her immortal.

While I did not have the privilege of seeing the original 1966 run of the show, I did watch the revival that aired on NBC during the 90's. I am sure many fans of the show will find many issues with Tim Burton‘s re-imagining, but I think that this new vision give audiences a more appealing product. If you are expecting Dark Shadows to be dramatic and “dark” then you will be disappointed. I would equate this new vision to be more like The Addams Family and less to the original source material. Johnny Depp, as usual, turns up his game when working with Burton and delivers an amusing Barnabas Collins to filmgoers. While most of the humor involved Collins adapting to the 70's, there was plenty of great lines delivered by all of the cast. Helena Bonham Carter delivered a multitude of funny lines as well and in some ways stole a few scenes from Depp. My only issue in terms of the acting was the portrayal of governess Victoria Winters (Bella Heathcote), which I felt was not really given enough screen time considering she is the love interest of Barnabas Collins. As with all Tim Burton films you can expect magnificent visuals as well as a great film score courtesy of Danny Elfman.

Dark Shadows is an enjoyable family film that introduces new assortment of characters into Tim Burton's universe. If you enjoy Burton's work, I recommend you check this out. Johnny Depp fans will appreciate his portrayal of Collins and the fact that Barnabus Collins now joins the long list of roles that have become synonymous with his career. Fans of TV show will need to watch this with an open mind as it is Dark Shadows in name only. 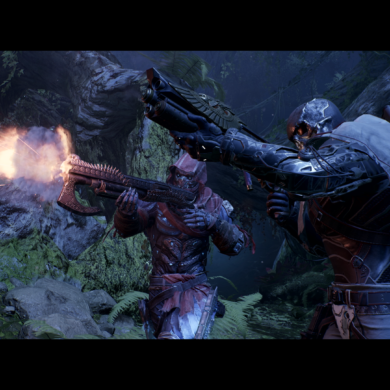 Outriders Coming to Google Stadia in 2021