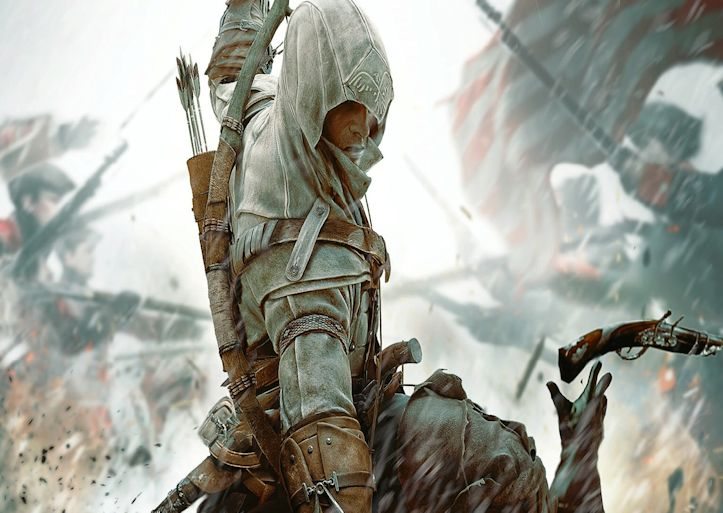 Assassin’s Creed 3 continues the story of Desmond Miles and his mission to thwart the end of mankind at the hands of The Templars. After playing the previous installments as Altair and Ezio, it was a welcome change to play as a character who was substantially different. However, players will not start the game as Connor, but as his father Haytham, who is not only essential to the overall development of the story but lays the blueprint for Connor’s journey through his own actions at the start of the game. The initial levels as Haytham not only serve to refresh gamers on the controls but also deliver one of the biggest twists in the series. Connor’s story one of vengeance that not only spearheads the quest but thrusts Connor into various historical moments. Desmond’s story as well as its conclusion were sadly a small blemish on an otherwise stellar tale.

The  graphics in AC3 were tremendously sharp and extremely detailed. Things like the small feathers in Connor’s uniform and the scar on his face were well-detailed. Level design was also impressive with vast areas to explore and people going about their business. There were moments when I just stood in area and watched people walk around just to see how they interacted. I did notice some small glitches, but they were not too glaringly obvious. There is a moment when you are about to be  hung when it's obvious that the binding ropes are invisible. While amusing to see the glitch, it did not hinder my enjoyment of the game.

Controls in this game remain for the most part unchanged, but are reactive as opposed to previous games where time was spent assuming a fighting stance and counterattacking.

The most notable control changes came from the naval missions, which at times were incredibly frustrating and from the damn lock-picking mini game which induced some copious swearing on more than one occasion. I did remedy my lock-picking woes by switching to a different controller with better analog sticks which actually made it bearable. During the initial sequences as Haytham, I did feel that the controls were a bit sluggish but that may have been to compliment his move set. Connor’s controls were very fluid and the counterattack combat flowed extremely well. The ability to switch weapons mid-combo proved to be one my favorite parts. Nothing like a tomahawk chop followed by shot from the pistol to finish things off.

A new addition in this game was the hunting which consumed a lot of time because there are not only strategic elements, but also quick time events as well which change the gameplay honestly for the better. You can hunt wolves, beavers, moose and many other woodland creatures who will yield dividends when it comes time to buy and upgrade your weaponry.

The extremely enjoyable multiplayer from Assassin’s Creed: Brotherhood is back and fleshed out further.  Blending in with crowds not only serves the purpose of avoiding detection but also plays a large part in your strategy. Sometimes you kill an opponent and other times a poor bystander eats a tomahawk to the face. Oops? Shit happens! The Wolfpack mode is a welcome change of pace as you and three other players engage the computer in a more straightforward fashion versus the stealth elements in the other mode.

Assassin’s Creed 3 is probably tied as my second favorite game in the series after Assassin’s Creed 2  and Revelations. While I felt underwhelmed by the ending, the fact is the journey was the enjoyable part. Connor’s character is a welcome departure from the more lighthearted Ezio and it shows not only in his combat but also in the character interactions throughout the game. Desmond is the centerpiece of the series, but his story felt less essential to the overall game until the end. I think there are stories I’d like to see expanded further such as Haytham’s indoctrination into “The Order” which would probably make an excellent spinoff game much like Assassin’s Creed Brotherhood.

I commend Ubisoft for making a game depicting Native Americans in a favorable light and not relying on all the typical stereotypes to tell the story. Their attention to detail and representation of historical figures like George Washington were huge accomplishments that made for a nice interactive “revisionist” history lesson. I don’t think we’ve seen the last of the Assassins or Connor Kenway.