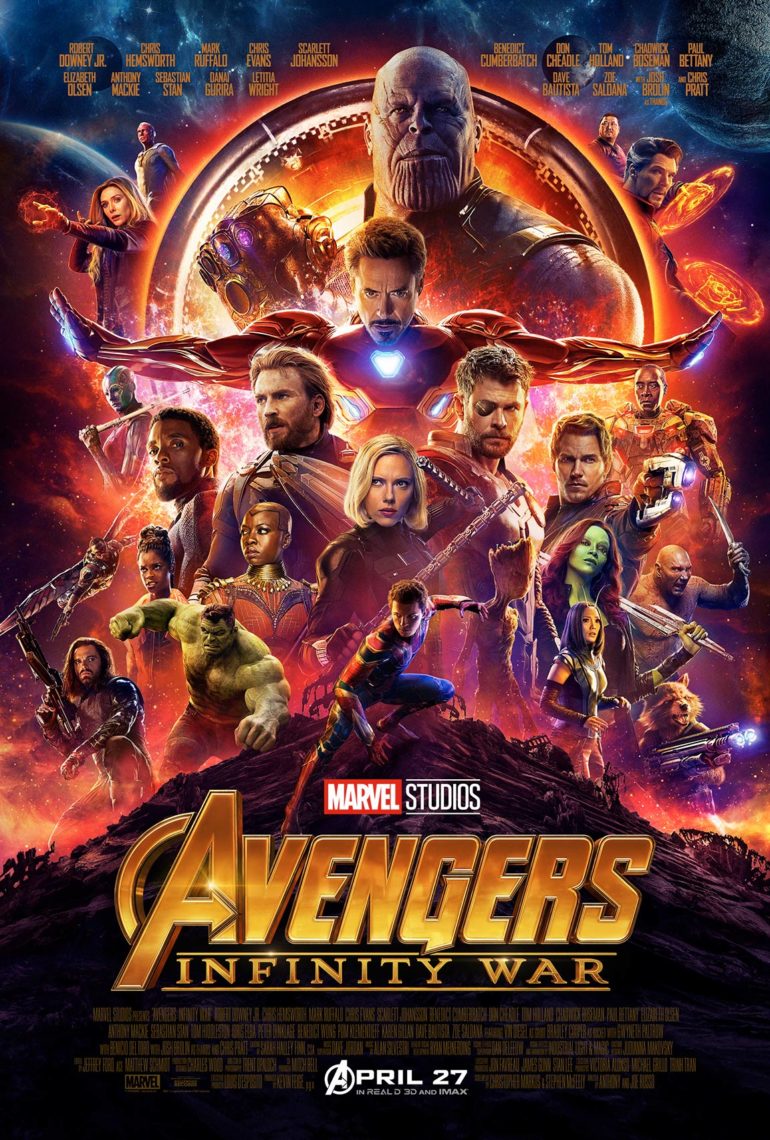 The Avengers and their allies must be willing to sacrifice all in an attempt to defeat the powerful Thanos before his blitz of devastation and ruin puts an end to the universe. – via IMDB

What started with just Iron Man in 2008 has brought us to this point, and as a comic fan, I am elated to see my favorite characters on the big screen in what could be described as a spectacle more than a film. Avengers: Infinity War jumped right into the action from the start setting Thanos' mission in motion and claiming a few fan favorites to get the ball rolling. While some people may be critical of the rather abrupt start to the film, I felt it set the tone and truly gave us a glimpse of the lengths Thanos is willing to go to see his plan come to fruition. While the film's plot deviated a bit from the Infinity Gauntlet saga and borrowed heavily from the Infinity series book, it definitely captures a lot of the iconic moments and dialogue from both arcs, which considering the sheer volume of characters was impressive to see.

The biggest concern going into the film was the sheer volume of characters we would be seeing on screen and if any of the characters would get lost amongst some of the MCU's more prominent leads. While the film did occasionally teeter on that line, I have to admit most of the heroes got their moment in the spotlight with some genuinely stealing the show. The Avengers trinity of Thor, Captain America, and Iron Man truly brought the cast together and created so many memorable moments including the exchanges between Iron Man and Doctor Strange, Thor and the Guardians of the Galaxy and Captain America with his fellow Avengers. The strength of these interactions was that they had healthy mixes of seriousness and lightheartedness that catered to each characters' respective strengths. You expected Spider-Man to be wisecracking and a smart ass and you got it, Tony being a snarky prick? Check, Captain America just being a complete badass? Mark that off too. The Russo brothers brought their A-game and pulled off something truly special and while I can heap a ton of praise on the film it was not without some small missteps. Let's start with Thanos' Black Order, which while very much in line with their comic book counterparts seemed a bit underdeveloped. I would have liked some brief flashbacks to flesh out their origins much like fans saw with Gamora. It would have made them more memorable and less like cannon fodder. A lot of work went into bringing the characters to life and to not spend 5-10 minutes on some light origin stuff seemed a bit short-sighted. My second issue was with the treatment of Hulk who went from ass kicker to nonfactor in a very short span of time. While I am sure some will argue that Hulk was handled correctly I think more context was needed to flesh out his overall involvement. Let's hope some of those elements get rectified when the fourth film arrives next year.

As I struggle to dodge sharing any spoilers in this review I will say that I expected more than one after-credit scene and was shocked to only have one. You would think after 18 films we could have got a bit more. After 2.5 hours and the film's climax, I get why they did that but a mid-credit and an additional after credit scene would have been awesome, even if it set up a different Marvel Studios film besides the one that's next

Avengers: Infinity War succeeded in combining elements from Infinity Gauntlet and Infinity to give both casual and hardcore fans a story they will be talking about for some time. As a long time comic book reader I never would have thought that getting a film of this magnitude was possible. Were there some shortcomings? Of course! However, the end result and journey to get to this point are things we cannot deny. Marvel and Disney set out to deliver a superhero epic and the film succeeded in doing just that. We now countdown to Avengers 4 and see where the next phase takes us.

If you've been enjoying the Marvel films from the start then you can't miss this film. IMAX and or RPX are an absolute must to truly appreciate the scale of this film.

What did you guys think of Avengers: Infinity War? Did it meet all your expectations? Sound off in the comments below.