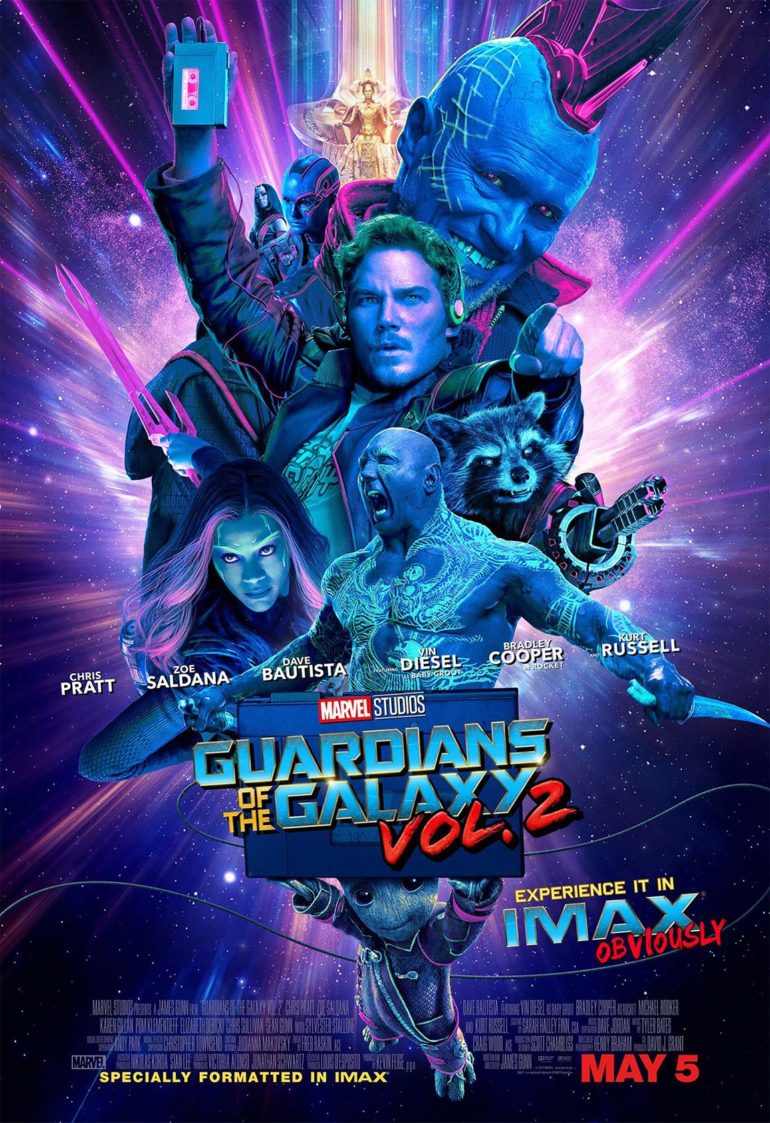 Set to the backdrop of Awesome Mixtape #2, Guardians of the Galaxy Vol. 2 continues the team's adventures as they unravel the mystery of Peter Quill's true parentage. -via IMDB

When the first Guardians of the Galaxy film was announced, I genuinely did not have an interest in it as I was never really a fan of that comic book growing up. The film not only exceeded my expectations but ranks in my Top 5 films from Marvel's Cinematic Universe. Guardians of the Galaxy had copious amounts of humor and memorable moments and the soundtrack was its own star. That said, Vol. 2 had to be on par and/or exceed the first installment and in my eyes it definitely did. The film had an underlying tone of family and the fact that blood does not always make you family, which resonates with me personally for a multitude of reasons and really brought out some stellar performances from all parties. The driving force of this sequel was the deeper dive into Peter Quill's origin which of course was ruined when the trailer revealed that Ego The Living Planet was Peter Quill's father. This bugged me as Marvel should have left that out of the trailer as it would have been a great reveal to witness inside the theater. But rest easy folks, because even though Marvel spoiled that, you will not see any spoilers from me here. Kurt Russell's work and chemistry with Chris Pratt was great and Pom Klementieff had her fair share of funny moments with Drax who continues to deliver great one-liners and gain new fans. Rocket received substantially more screen time and we got some additional character development which will surely make Rocket even more beloved by fans. Baby Groot stole the show more times than I can count and his interactions with all the characters ranged from heartwarming to over the top funny, which can also be applied to Micheal Rooker's Yondu who had his fair share of funny and heartwarming moments as well. The only character that kind of fell through the cracks was Gamora, which considering her relationship with Thanos was a shame, but with so much going on it was inevitable one of the Guardians would not have as much of a prominent focus. But, even in that regard, the narrative between Gamora and Nebula will continue to be explored as we get closer to Infinity War.

Guardians of the Galaxy Vol. 2 kept the charm from the first film and continued to expand Marvel's space universe with each scene. We saw new worlds and met some familiar characters that seasoned comic fans may recognize plus a heap of easter eggs. The theater erupted in laughter more times than I can count which is never a bad thing and the humor in my eyes was not forced or gratuitous it was just well executed by all parties.

Effects-wise, the film hit a homerun with its vibrant mix of colors and over the top action sequences and the 3D was not distracting or annoying which is something that sometimes hurts films that have a lot going on onscreen.

If you loved the first film, you will surely love the second. James Gunn has already started working on part three and of course, we still have Infinity War on the horizon so we'll be seeing more of Star-Lord and the gang for the foreseeable future.

I'll close out this review by saying this film will make you laugh and cry but above all, you'll be entertained by the time the credits are done. Speaking of credits, this film has five post credit scenes so stay in your seat folks. I am sure many of you know this but some people still haven't learned.