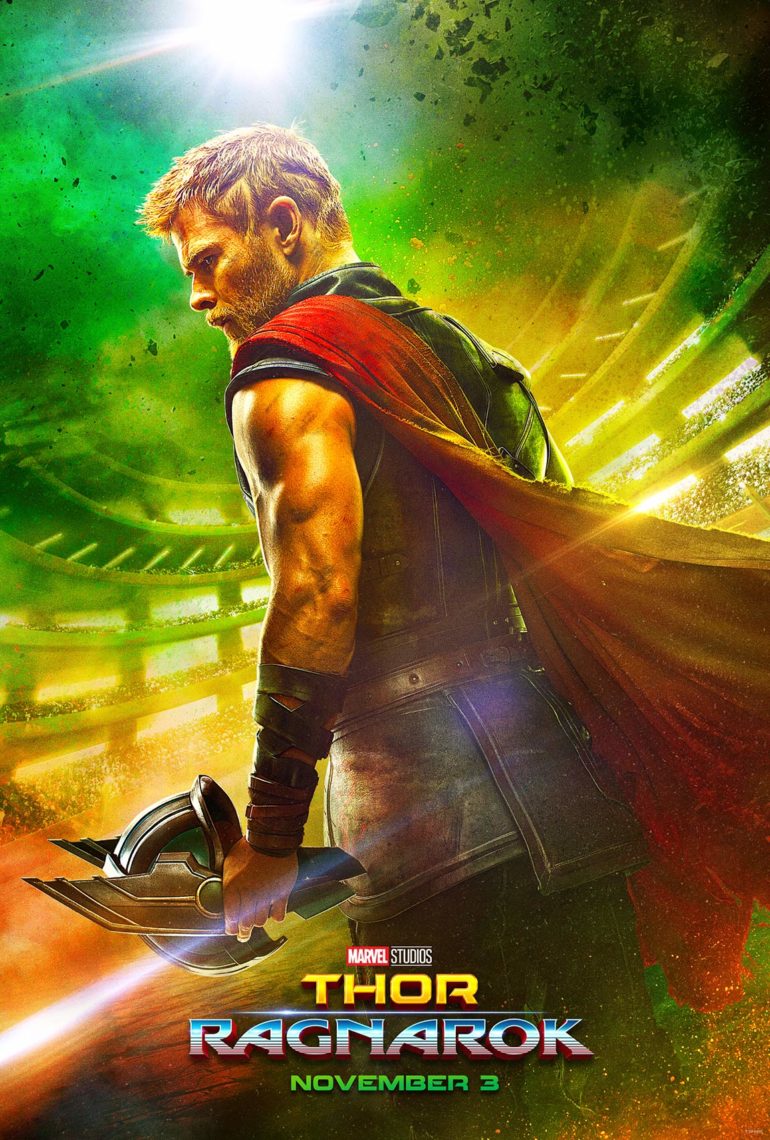 Imprisoned, the almighty Thor finds himself in a lethal gladiatorial contest against the Hulk, his former ally. Thor must fight for survival and race against time to prevent the all-powerful Hela from destroying his home and the Asgardian civilization -via IMDB

Growing up reading comics, I always felt that Thor was not a cool character, While I loved Greek and Norse mythology growing up, I always felt the Thor books were not enjoyable to read and most times I only read them when they tied into a larger saga. It was not until Thor made his debut in the Marvel Cinematic Universe that I started to appreciate the character and revisit some of his stories. The first Thor film made Asgard interesting and had some fun with Thor and Loki's relationship (even with them being at each other's throats). Thor: The Dark World added to the Thunder God's mythos but did not have the same level of deep storytelling that the first film had. What it brought to the table was more of Asgard's history and Loki's relationship with his adopted family plus more plot advancement regarding the infinity stones. You have to ask yourself “How can Marvel keep Thor fresh and interesting“? Well, by pairing him with the Hulk in a buddy cop style film of course! When the news broke that Thor: Ragnarok was going to go that route I cringed because I genuinely did not see comedic potential in that pairing minus some tests of strength and Hulk most likely punching Thor in the face. Taika Waititi turned that entire concept on its head and most importantly he did it well (while still allowing Hulk to punch Thor in the face more than once). He succeeded in making Thor more interesting while also adding a bit of additional backstory to the tales of Asgard. Plus, he evolved the Hulk into more than just the green gorilla we've seen on screen so far. Not that the gorilla-esq Hulk was bad, it just felt a bit stagnant with the character not moving beyond his “smashing machine” status on the team. The Planet/World War Hulk influences were strong and weaving them into Thor's story was a smart way of giving fans a bit of that arc without having a full-fledged film, which sadly we wouldn't see anyway due to rights issues.

Let's break down the lead characters first. Chris Hemsworth continued his stellar work as Thor and while the character underwent a few changes over the course of the film, the most prominent thing I noticed is that Hemsworth looked like he was having a blast and Thor was more of an extension instead of a character he was playing (similar to how Robert Downey Jr. is Tony Stark). In a recently published interview, Hemsworth stated that he loved playing Thor in Thor: Ragnarok because the character had new life and the approach was a breath of fresh air versus the previous outings as the character. I am inclined to agree that Thor plateaued a bit after Thor: The Dark World. I look forward to seeing a more jovial and carefree God of Thunder in future films.

To say Tom Hiddleston steals the show as Loki is an understatement. Hiddleston brings the right amounts of charm, comedy, and underhandedness that have endeared the God of Mischief to many Marvel fans. Loki also remains one of the few villains that have not fallen victim to Marvel's usual short villain shelf life. His role in future films will continue to play on these traits both as anti-hero and adversary of the MCU.

Last but not least of course is Mark Ruffalo's Hulk. Ruffalo had a more active role in this film doing mo-cap and also providing the voice for the jade giant (sorry Lou Ferrigno). In addition to being the backbone of the Hulk character, Ruffalo excels at making Bruce Banner likable while keeping the chip on his shoulder prevalent. If you pay close attention in this film you'll see what I mean. The “Dr. Jekyll and Mr. Hyde” approach has always been a major characteristic of the Hulk and this film continued to keep that front and center much like the first Avengers film did. I was personally not on board with the Ruffalo casting choice when this all started, but the guy has made a believer out of me and continues to make Hulk a fun character to have on screen.

Thor: Ragnarok was not just about Thor, Loki, and the Hulk but also about new characters Valkyrie and Hela, who each had some deep ties to Asgard's rich history. Valkyrie's story alone could have probably been a great stand-alone tale, especially as it relates to Hela's rise to power and fall from grace. Tessa Thompson held her own against her fellow Marvel Cinematic Universe veterans, especially when it came to scenes with the Hulk and their friendship. I thought that aspect could have been explored more but that's just a personal gripe. I enjoyed her work as Valkyrie and look forward to seeing her in more films.

Cate Blanchett's Hela was another example of stellar casting. I was genuinely impressed with how she brought Hela to life. I never thought I'd see an actress of her caliber in a film like this but if the legendary Anthony Hopkins can play Odin then I guess anything is possible. Hela's rationale and her belief that she was the rightful heir to the throne of Asgard was carefully crafted, with viewers getting some closure on certain open items seen in previous films. Once we got Hela's full story, a lot of things shown in the trailer made sense. I'd like to see more Hela in the MCU as I think she has the potential to be a stellar long term villain much like Loki has been.

We can't talk actors and characters without discussing Jeff Goldblum's portrayal of the Grandmaster. I felt he channeled a bit of Ian Malcolm from Jurassic Park for this role and knocked it out of the park in the process. He was vicious but had the right mix of funny at the same time. If you weren't aware, the Grandmaster and the Collector are siblings. I'd love to see him and Benicio Del Toro chopping it up on screen as that is a sibling relationship/rivalry that should be explored – especially with what is on the horizon on the MCU. I believe both of these cosmic beings have a role to play.

Last but not least, I cannot forget Korg who was voiced by director Taika Waititi. Korg was a fellow gladiator in the film much like the Hulk was. This ties into his role in the Planet Hulk saga. While Korg may be viewed as a Hulk ally, when you dig into his comic book origins you will see his story is tied to Thor primarily. He was written a bit different in this film than his comic book counterpart, but it was certainly for the better. Every scene Korg was in was funny and the voice he had compared to how he looked made for some great unintentional comedy particularly at Thor's expense.

While Thor: Ragnarok can easily be compared to Guardians of the Galaxy both in tone and kick-ass soundtrack, the fact is that Thor: Ragnarok is in a league of its own thanks to some risks taken by the director to give us something fun that can stand on its own outside the MCU if need be.

Thor: Ragnarok is a far departure from the more classic Thor tropes seen in the previous films. Gone is the more stuffy Kenneth Branaugh version of the character (although there was nothing wrong with that) and in his place is a more lighthearted but also more powerful God of Thunder. The comedic approach may turn off some fans, but one cannot ignore that Thor: Ragnarok evolved both Thor, Hulk, and even Loki for the better all while continuing to expand the locations and inhabitants of Marvel's cosmic universe.

This film, while awesome in 3D and IMAX can be enjoyed without the 3D as it was not really needed. Only a handful of scenes benefited from it. If you can see it in just plain IMAX then definitely go that route.