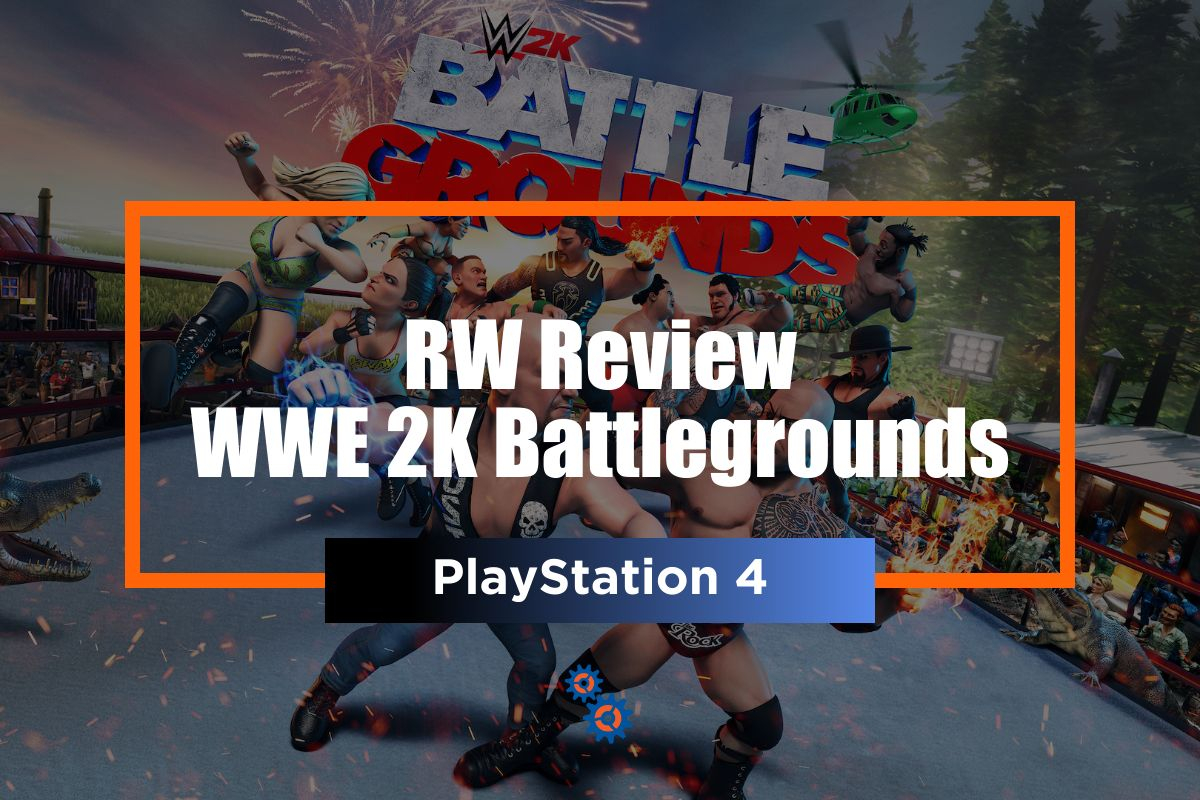 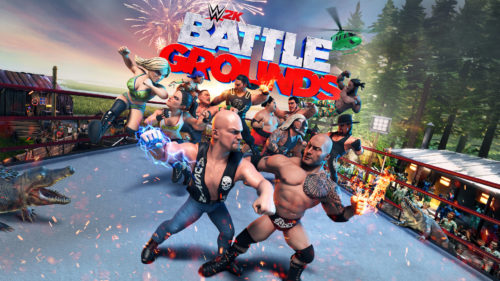 2K opted to shelve the WWE 2K series after the performance of WWE 2K20, but rather than give the WWE license a breather, 2K opted to do something a bit different and take the WWE superstars out of the more simulation-based WWE 2K series and move them into a more arcade-style environment with a large helping of cartoonish graphics resembling the WWE/Masters of the Universe figures with the result being WWE 2K Battlegrounds. As we covered the game's development, we wondered if we would get something like the old WrestleMania arcade game or like the extremely underrated WWE All-Stars franchise. What we ended up getting was something entirely different, albeit with potential if 2K decides to make this an ongoing series.

Let's start things off with gameplay. The WWE 2K Battlegrounds controls are straightforward to pick up, and you'll be laying the smackdown on your opponents in no time. While nice, the simplicity handcuffs the game a bit as your WWE superstars lack depth in their move set and are instead grouped into Powerhouse, Brawler, Technician, High-Flyer, and All-Rounder. The groupings lead to most characters having essentially the same moves. You will see slight differences in move execution, such as a Powerhouse style wrestler moving slower yet having more powerful striking than a high flyer.

WWE Superstars will have their signature moves and finishers, but there is definitely a lot of move list copy and paste going on for the most part. I get wanting to make things easy to pick up for a variety of fans, but a solid move list for your favorite WWE superstars is a must. While I overlooked the simplistic and repetitive controls, I could not get over the game's reversals. There's a big window to pull them off, and depending on the difficulty level you're playing at, a match easily breaks down into a reversal-fest. The counterpoint to the easily abused reversal system is you'll lose a bit of “heat” when using reversals. The heat meter allows you to use both signature and finishing moves, and you will build it up throughout the match. Players can also use powerups during your matches. These powerups are selected at the start of the match and can be as simple as some health to making attacks unblockable. You'll need to play around and determine which will be your go-to power-ups depending on the opponent. Brawler-type WWE superstars can also use weapons, including the staple steel chair, a wrestling game staple.

The game has various gameplay modes, including a fun and quick campaign mode that you can breeze through fairly quickly to unlock some superstars from the game's 70 superstar roster. The starting roster is a bit on the thin side, but with campaign completion and casual matches, you'll make some decent headway. Unfortunately, as is the case with many titles nowadays, microtransactions hurt the game immensely not only because you have to buy in-game currency to put towards superstars but because you also have to use it to buy stuff if you really want to get the most out of the create a superstar feature. I feel that introducing a new and easily accessible game makes this a must for young kids, and to nickel and dime them in this current climate hurts the game's word of mouth. I was told about the microtransactions practically the same day by some of our readers who purchased the game, and they were genuinely annoyed and with good reason. Sure, you can grind online and offline to get more of the game's in-game currency called Battle Bucks, but not everyone will put that much energy into this game to unlock characters that should, in essence, be in the starting roster lineup plus if your internet is not up to par or you don't play online you're stuck with just your unlockables from either the campaign or from the deluxe edition, and you will have to grind offline. The Golden Bucks are the currency you purchase starting at $4.99 for 500 and as high as $49.99 for 6,500. Superstars start at 75 Golden Bucks, and higher tier superstars will run you 300 golden bucks.

Campaign playthroughs also unlock new battlegrounds and power-ups. A campaign run took me about 10 hours spread over a few days, but if you grind, you can play through in a day. Other modes include Battleground Challenge, which I feel is just a version of “arcade” mode. King of the Battlegrounds is the game's version of a Royal Rumble plus the usual wrestling game staples such as the steel cage, three-way dance, fatal four-way, and tag team matches.

I have to say that while WWE 2K Battlegrounds has its shortcomings, they can easily be fixed in a second installment by listening to gamers and giving them access to most of the current roster without locking them behind points, coins, etc. I also feel a deeper catalog of moves, and more consistent graphics would be welcome in a second installment. If you pick Mandy Rose, it should look like Mandy and not some generic character template.

I have seen plenty of animated versions of WWE superstars that look exactly like or close to their real-life counterparts. If you see mainstream art like the WWE comics or even from independent creators on the web, it will prove that it can, in fact, be done. It does not have to be perfect, but it can be better. The Battlegrounds characters aren't all bad, though, just inconsistent.

Lastly, let us hope they move away from the nickel and diming with microtransactions, which sadly is something people bag on 2K for often. In terms of traction with wrestling fans, I feel young fans will be able to really enjoy this game thanks to its easy learning curve, but more seasoned gamers may take it for a spin but kick out at 2 due to the lack of depth in the superstar movelists and the microtransactions. The anticipated roster updates should extend the game's shelf life with longtime WWE fans, but I feel that will be shortlived as well with this being a new console year unless 2K makes a play to upgrade the game for next-gen consoles as an incentive to keep playing.

It would be easy to sit here and nitpick the game to death and wish it was more like No Mercy or WWE All-Stars but as an older gamer, those games were classics, and trying to force developers to mimic it is only going to sully the legacy of those iconic wrestling games and not allow developers to experiment and try something new. I enjoyed the game and commend 2K for taking a gamble and trying something new with the WWE license and at $40 you get a pretty fun game that will surely shine amongst a group of friends hanging out before a PPV or young WWE fans looking to get their WWE fix beyond the current simulation-style 2K offerings

RAGE Works was provided the August Wi-Fi Smart Lock for review by August.

RAGE Works works with various affiliates, and any purchase links within this review will allow RAGE Works to earn commissions on purchases made by clicking those links at no additional cost to you. 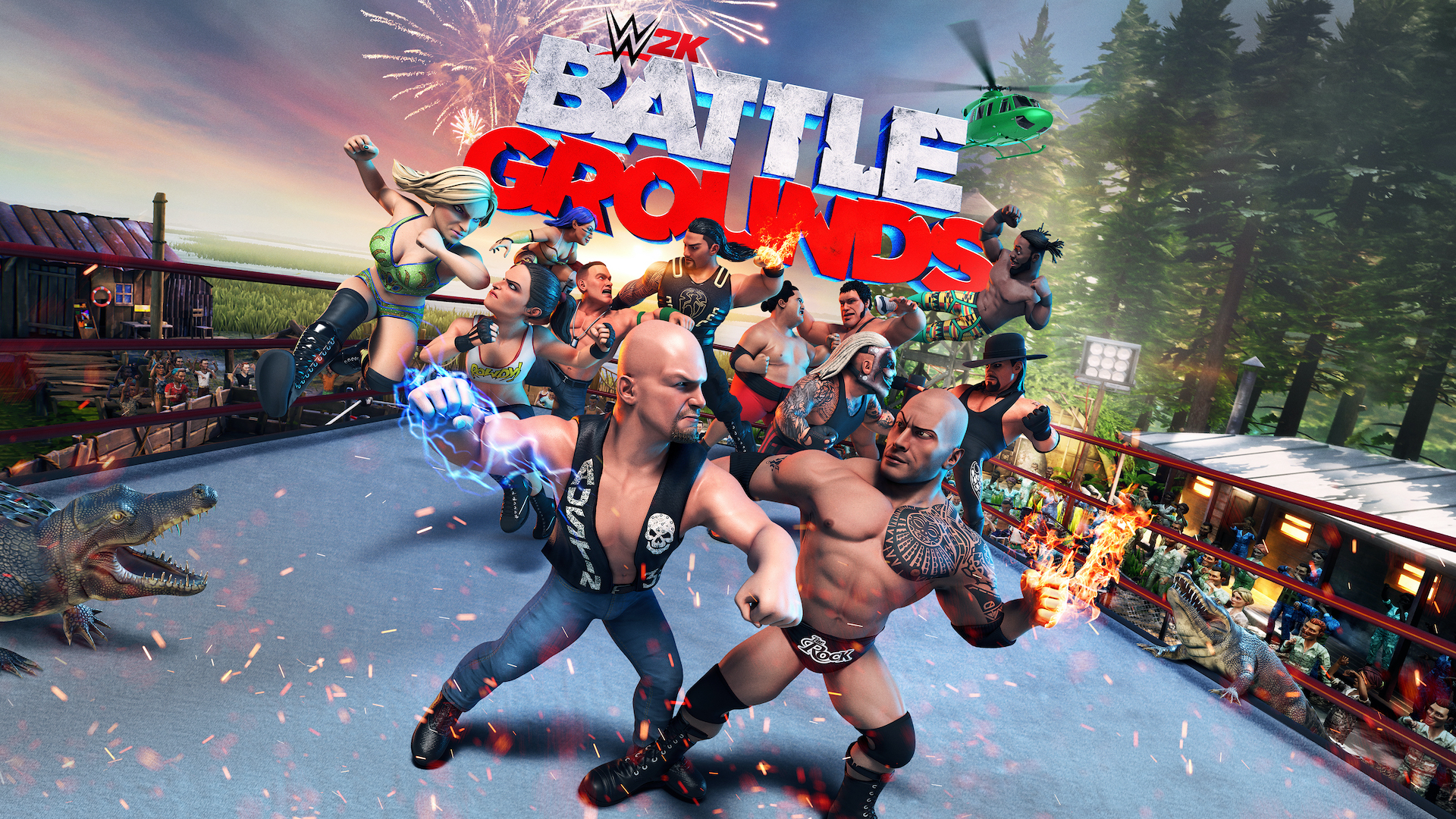 RW Review: WWE 2K Battlegrounds
Final Thoughts
WWE 2K Battlegrounds is a fun game with plenty of potential hampered by an assortment of missteps that could have been avoided.
What We Liked
Simplified controls
Mauro & Lawler Commentary
Large Albeit Locked Roster
What We Disliked
Limited Accurate WWE Superstar Movesets
Microtransactions
Counter System