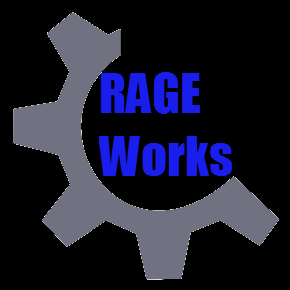 2014 has been a huge year for video games, movies, comics and just entertainment in general. Guardians, turtles, dinobots, zombies, sharknados, destinies, etc., there has been something for everyone. The sad part about all that greatness is that all good things come to an end. However, when you have  had a year that big, it has to end with a bang and December is shaping up to be huge for R.A.G.E. Works’ like-minded individuals. Here is just a sampling of what to expect in December that might get holes-a-burnin’ in your pockets. Basically, it is my personal wish list for that month, but that doesn’t mean you won’t be looking for these things as well. Also, remember that the Rage Works staff does accept gifts!

First, let’s take a look at some of the games hitting stores in December:

I have been into cars since I was a child. Sadly, I am a wage slave and my Ford Fusion is the only real car that I am going to own for the time being. Driving games have been a staple for me since way back playing Pole Position in arcades and playing Enduro on the Atari 2600. Since I do not own an Xbox One, I have not had a chance to experience a really good driving game this year. What about Driveclub you ask? Well, despite reviews, I wanted to try it for myself to decide  – that game has been out for two weeks now and PS4 owners are still waiting for the demo. That said (with head lowered), I am hoping for something fantastic from The Crew. I am not big on MMOs of any kind, but I will try a social driving game. You might also be wondering why this is on my list when The Crew was supposed to have an early November launch date. Well, it has been pushed back to December 2 and I hope the extra time makes the game worth its price. I have a few ready to join my crew this winter and if you want to join or oppose us, hit me up on Twitter.

While not a fan of MMOs, standard RPGs are just as much of a staple for me as driving games. I never got into the original releases of Kingdom Hearts and when I learned that Japanese versions had more content than what was available to us, I had lost interest even further. Now that we are finally getting the full experience, I had picked up KH 1.5 last year when it released and thoroughly enjoyed it. Continuing the story and throwing in the extras once again, I cannot wait to get my hands on this PS3 remake and you know KHIII will be nothing short of spectacular on the new consoles. Just like The Crew, KH 2.5 will be in stores on December 2.

That first week in December will be a bad week for me to even consider saving money as this next title comes out the same week as the first two games! Spinning off the success of Super Mario Galaxy and the recent Super Mario 3D World titles, Nintendo is giving the Toad crew that helped Mario in his galactic travels their own game. If you have seen the previews at e3 and Nintendo Direct videos, you know this is a must for Wii U owners (hopefully there will be more of us this holiday). Get ready to track down treasure on Friday, December 5.

With gaming, the rule that “there can only be one” gets thrown out the window when it comes to excitement as I want all of these titles. However, this is the one I have been waiting for the most as I am a big fan of the Guilty Gear series and this game was originally announced as a Japanese arcade title that would eventually come to consoles over a year ago. I have seen many tournament videos of the game and the madness that is Guilty Gear will be faithfully represented on Sony consoles this winter. This will also be the first fighting game to come directly to the PS4 (releases simultaneously for PS3). I do not count Injustice because that was just a port of the previous edition for PS3. Fans get ready to get destroyed all over again on December 16. On a side note, what is a fighting game without an appropriate fighting stick. Get the Hori Real Arcade Pro (HRAP) V4 Hayabusa from our Amazon shop and whoop ass on PS4 and PS3!
The HRAP V4 Hayabusa is not a part of this list because according to Amazon, it is available for sale starting October 22, 2014.

Moving on, here are some home video releases:

The saga of the Avatar continues! Aptly titled “Change,” season three of The Legend of Korra saw a lot of changes for our hero. She was completely knocked off of Nickelodeon’s broadcast lineup and relegated to online broadcast only. Fortunately for fans, that means we do not have to wait the usual year to get our hands on this. Let Korra change your world on December 2.

Unlike Nickelodeon, Marvel loves your money and they are quick to tear as much of it away from you as quickly as possible. Consider that as I am typing this, while it may not be in the top 10, Guardians of the Galaxy is still in theatres, and still making disgusting amounts of moolah for Marvel. Listen to Vin Diesel make “having wood” cool over and over again on December 9.

This one dropped my jaw. It also pissed me off a little. Finally, an HD remaster of the Cowboy Bebop series. . . but no 16:9? The aspect ratio is going to be 1.33:1. The extra art books that come with this amazon-exclusive version are going to be worth the money, but I am not so sure about the discs. I will be keeping an eye on this one and odds are I will own it, but way to phone it in once again, FUNimation. The Cowboy Bebop Complete Series on blu-ray will be released on December 16. Click the link to buy the special amazon-exclusive edition from our store.

Quite possibly the single most fantastic item to come out this year (for me, anyway). This is model MP-22 in the Takara Tomy Transformers Masterpiece lineup, Ultra Magnus. My friends know that I loathe Ultra Magnus. He was the worst Autobot leader and as big as he was, he was a bum because he had this annoying tendency to get BLOWN APART (happened more than once, people). Regardless, this piece is amazing. The truck itself is a copy of the MP-10 Optimus Prime mold (painted white), but the trailer, when combined, makes the robot you see. It can even hold 4 regular sized masterpiece cars in vehicle mode! This is the type of collector’s item that makes me do the Homer drool. Due in December, it is a must have for any hardcore Transformers fan.

So there you have it folks, a Christmas list to make parents cry. Of course there are tons of other things that either myself or you as the reader would want, but remember that this list is strictly dealing with things that become available in December. Even though October is mostly done, There are still titles like Bayonetta 2, The Legend of Korra game (please don’t suck), Sunset Overdrive and WWE 2K15 releasing before Halloween. I don’t even want to think about the mess of games that come out in November right now. Whether it is for you, your children, your SO or all of the above, you had better do some overtime and get your pockets ready because much like we have Booker T tell Hulk Hogan every week, “they comin’ for you!”