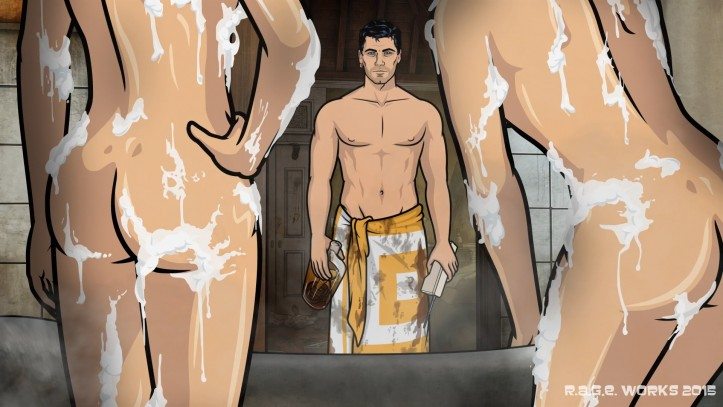 Archer is truly a wild boy.

The good news is that season six of Archer is finally here! The bad news is that the aforementioned drives home the point that Archer Vice is no more. Archer is once again a legitimate secret agent; he is also finally a legitimate father. Agent dumbass is still clueless to the fact that baby Seamus McGoon (who has not been seen in four seasons)  is really Cyril’s son. That’s ok (sort of) because Cyril does not (yet) know that Abbiejean’s biological father is Archer. I see more shit than usual hitting the fan this season. ISIS is back, but you will not hear mention of that name due to real-world terrorist assholes. Pam is fat again and although what Archer said is true that we loved her before, I for one, will miss hot Pam. The agency is now officially an unofficial branch of the CIA and the real Algernop Krieger may have been replaced by one of his clone brothers. Cyril is still a wuss, Ray is still fabulously bionic from the waist down and Cheryl is fully clothed, people! Stop searching for “Cheryl Tunt nude.” All seems to be right in the world of Archer, which can only mean that things are about to go horribly wrong. Can I get a clone bone?

So many questions; so many answers I do not want to hear

FALLEN ARCHERS When we last saw Sterling, he was being informed once again that he is a father. Lana stole his frozen sperm and impregnated herself, so now we know who the father of her child was. We also know that Lana is not the type to lie about something like this. That means that despite the fact that this is Archer’s second child, this is the first that is really his. The shock of this news prompts Archer to do what he does when he is caught off guard, and that is to run. A season premiere that kicks off with Archer in a foreign land surrounded by liquor, sex stains and. . . a baby goat brings back memories of his pirate king days. The fact that he is a father again also raises the question I know I am not the only person asking, what is going on with Trinette and the wee baby Seamus? The clearly neglected son of (Cyril) Sterling is probably four or five years old now. He is probably not going to take the news of his “dad” taking care of his newborn baby “sister” very well. That is a matter for future episodes. Archer’s disappearing act put him in perfect position to take on his first CIA-sanctioned mission. The agency formerly known as ISIS is tasked with recovering the flight computer of an American spy plane that went down in Borneo. Even when the jungle is teeming with enemy insurgents, a search and recover mission should be pretty straightforward. We are five seasons invested and know that nothing is straightforward with Sterling. Welcome to season six, people.

NO PLACE LIKE HOME The cunning of Malory Archer knows no bounds. After losing (literally) tons of CIA cocaine, overthrowing a South American government the CIA was funding (to get said coke) and breaking enough laws to earn a place under Guantanamo Bay, she still comes out on top. The office building has been completely rebuilt, the agency is back in business and they are now a CIA shadow agency. If you are wondering what could go wrong, let's start with the fact that Malory put Pam and Cheryl in charge of redecorating the office. Of the two, Pam definitely could have pulled off an amazing job but since they both hate Malory, they purposely and painstakingly recreated the old office. If there were such a move in Mortal Kombat, the screen would have flashed with “TROLLALITY; FLAWLESS VICTORY.”

Not gonna lie that this scene made me shed a tear

HEART??? OF ARCHER Sterling successfully pulled off his first CIA mission but he did not do it on his own. Despite getting his ribs broken, a punctured lung and a hole stabbed in his foot by a poo-smeared tiger trap, Archer was lucky to meet Kintaro Sato. The WWII soldier stuck on the island was instrumental in Archer’s recovery of the spy plane’s computer. During their time together, Kintaro berates Archer for running from his duties as a father, stating that he’d do anything to see his wife and daughter again. This is also one of those times where you have to ask yourself just when the hell does Archer take place. Even if Kintaro enlisted at twenty years old, he should be in his nineties right now but can still carry a grown man on his back. I will let it go as another one of those cartoon things because Archer should be dead at least ten times over with the amount of times he’s been shot, stabbed, beaten, broken or cancered (it’s not a word, sue me). Regardless of all the pain he caused Archer, Sato still started a fire in him that made him man up to his responsibility. In what may be (for me) the single most awesome thing that Archer has ever done, he shoots at the CIA extraction team for trying to rush him so that Kintaro could have talk on the phone with the family he thought he would never see again. Archer is going to be a good father to Abbiejean; let’s just hope he can finally be something good for Lana.

Is anyone in this picture really a suitable parent?

Archer is the type of show that could be purely episodic and no one would care. Each story could be self contained and people would love it just the same because the cast is so fantastic. The continuity and dutiful maintenance of such is what makes this show one of the best prime-time comedies around. In this one episode, we have allusions to all five of the previous seasons and get a good idea of where things are going this season. Even if the creators had not said it themselves, you know that Seamus (who is not really a baby anymore) is going to show up. Things have not been resolved with Bionic Barry and the fact that Archer has not one but two children could stir up some feelings of jealousy in Katja. Cyril was really pissed about Lana even being pregnant; when he learns that Archer is the father, well, it will be like lighting two sparklers at once! Archer has some tough times ahead of him, especially if he tries to make an honest woman out of Lana. Remember that he already asked her to marry him once.

P.S. When the blu-ray comes out next year, if the hookers at the beginning are not women, PLEASE don't let us find out!