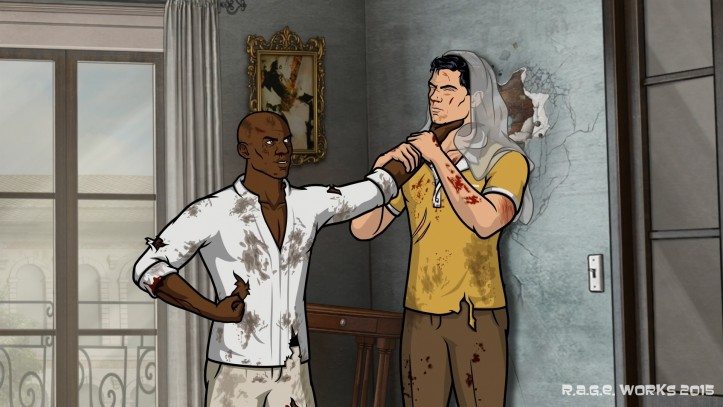 Like I said, an awful lot of choking
Christian Slater on Archer for a second season. . . you can't buy this kind of awesome. Wait, yeah, you can!

Archer and Lana, the power parents of animated espionage, continue to raise baby Abbiejean in the worst possible environment. The offices formerly known as ISIS are under CIA control now and their primary contact within the agency is a guy who once shot Archer in the chest with a shotgun propelled beanbag. He is also voiced by Christian Slater, which equals automatic awesome. Historically, the best episodes of the show involve office hijinks so I have to say that I am glad that Pam and Cheryl played their mean little joke on Malory. It probably also saved the digital artists a lot of time and money not having to create new backgrounds but we will not dwell on that. This week, both Archer and Lana are going back to Abbiejean’s homeland (she was actually born in Argentina) on what will most certainly be a dangerous mission. One has to wonder who would take care of that beautiful little baby if mommy and daddy don’t come home.

Lana's calm during this fight put it over that much more

ASS FROM THE PAST Slater shows up in Malory’s office to give Archer and Lana an extraction mission. He particularly picked these two because they know and have history with the person who is to be extracted. Flashback all the way to first season episode “Diversity Hire,” where we were introduced to double agent Conway Stern. The entire office was in love with him, save Lana and Archer. In the end, he stabbed Archer (literally) in his back and as he tried to escape, Lana tore his left hand off. As you might imagine, this is not going to be a very happy reunion. Archer’s “revenge rampage” turns into a fight worthy of the famous “They Live” back alley scuffle and the South Park cripple fight. Cooler heads finally prevail in the form of Lana conking Conway over the head with his teapot. The duo then learn two things from Conway: that Krieger will give bionics to anyone and that the Argentine military has a secret file containing the real identities of all CIA agents working in their country. Before he can be extracted, the file must be retrieved.

There is so much wrong with this scene. There is also so much awesome.

THE FATE OF BABY AJ It seems that everyone is wondering who would take care of Lana’s daughter if her parents died. Ray seems to think that he would be a good parent which Cyril refutes as he is smoking around the baby. Malory swears that she is the only logical choice to raise her which I cannot even type without laughing. The terrible flashbacks we have seen of Archer’s childhood speak volumes about how she is not fit to raise a child. I’m not even talking about the alcoholism. Then there is the little matter of the fact that while Archer and Lana are in South America, she manages to lose Abbiejean. How you lose a baby in an office building is beyond me. She begins to point the finger of blame at everyone other than herself. It is only the calm head of Pam that makes her retrace her steps and realize that Dr. Krieger most likely has her granddaughter. Krieger’s latest invention, meant to be an interactive child’s toy gets him into serious trouble as it looks like a baby skeleton. Everyone thinks that his dancing teddy bear design is meant to be a bionic skeleton for baby AJ. He is unable to back his words as the prototype hides form everyone and Malory threatens to shoot his dick off if he ever comes near AJ again. The teddy bear robot comes out and laughs at him after everyone leaves.

He really thought ‘Lando Calrissiano' was gonna fly. You can't see it, but I am just shaking my head.

DON’T CRY FOR ARCHER Back in Argentina, Archer, Lana and Conway put their plan in motion to get the secret file. Archer is an idiot and doesn’t get that Star Wars is a worldwide phenomenon so he chooses the cover name “Col. Lando Calrissiano.” This, along with Sterling deciding to “Archerize” the guards earns him a grade-A ass beating, but not before he manages to take them all down.  After Conway gets the info they were looking for, he shoots Archer in the back five times, leaving him for dead. He explains that the only reason he doesn’t shoot Lana is that she just had a child. After a crass remark about baby weight, an enraged Lana slams shut the window Conway was standing in, severing his right hand as he parachutes away. Fortunately, Slater is there to pick them up, so despite bullets that should have caused spinal damage, it seems that Archer will be fine. Lana finally explains to him that she did not want to discuss the what if situation regarding AJ because she had already decided her parents or her sister would take her daughter if anything happened to her. She was not even thinking of allowing Archer to raise AJ by himself. The only problem I have with that is that it sounds like foreshadowing. Compared to the rest of the cast, Lana has take very  little damage and I do not want to see her luck run out.

Throw ya hands in the air! Or. . . just drop it on the floor. Whatever.

With two CIA missions under his belt, Archer has sustained a total of six holes in his body and one of those holes came from a poop-covered spike. His lung has been punctured thanks to several broken ribs and without the help of a (very active) Japanese WWII veteran, Archer would be fertilizer somewhere off the coast of Southeast Asia. I called it when I said that his past was going to catch up to him, but it also seems to have caught up with Conway, who is now going to have two bionic hands. Aside from the pain of having your hands cut off, that still seems like a win for him. Krieger is continuing to get more and more strange which is saying a lot for that guy. I am still not convinced that the Krieger that came home from Argentina is the one that went there with the rest of the crew. The creepy baby skeleton bear is normal for him, but we have not seen his virtual fiancé since he came home. Also if you look at the x-ray in the background it is of a bionic right hand. We know that scenes run concurrent to one another so it looks like Conway has already had a replacement made. Then there is the elephant in the room. I need to know what the hell that ominous shadow is behind the glass in the room marked “keep out.” It looks like the power armor from Fallout 3 or the original Cylon design from the first Battlestar Galactica series. We need to keep close watch on this guy. I am sure that as the season moves forward that Malory will prove to be less and less fit as a grandmother. Archer will hopefully prove to be more and more fit to be a father and almost undoubtedly husband. Seriously, the only way these two are going to die is together; and then Krieger will probably turn them into cyborgs.

I have a feeling that we are going to see another Krieger this season. There is an awful lot of choking going on in this episode