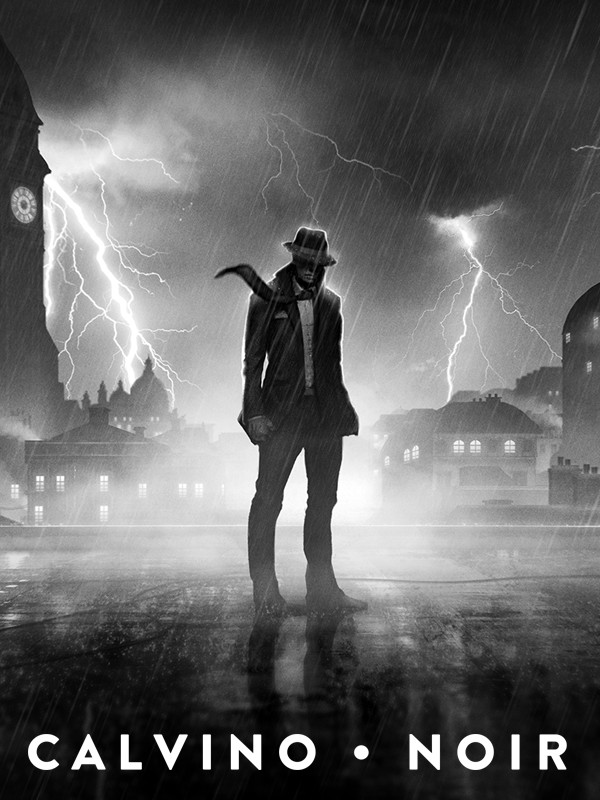 I was one of those kids that always wanted to be a ninja. I used to challenge myself to get through certain areas without being noticed and I have always taken note of how long it take someone to realize I am in a room. For that reason, games with elements of stealth have always been of interest to me. I do often like to simply go in guns a blazin', but there is much appreciation for the quiet approach in this gamer. This is where a game like Calvino Noir catches my eye. The name of the game is creativity when dealing with enemies here and I think that developer Calvino Noir Limited might just have a winner here.

The quality of Calvino Noir's story might depend upon who you ask. It is undeniably a cheesy retro plot that hails back to old black and white movies, but again, that might be its charm depending upon who you ask. While it is never clearly stated, the fact that the bartender refers to you as “Ausländer” and that you are paid in marks at one point leads one to think that the story takes place in Germany, circa 1930. The main character is Wilt, a private detective that is not very well respected by clientele or even those who call him a friend. Regardless, he seems to have the skills needed to get things done quietly. How polished they are is up to you. As the plot unfolds, you quickly learn that you are caught up in some sort of government corruption scheme and you can either dig yourself out of the pile or drown in it when everything eventually hits the fan. Wilt is not alone; there are two other primary characters. Arno is Wilt's friend that he calls upon for assistance early in the game and Siska is the woman that got him into this mess. Each one has a different play style. Whether you use subterfuge or brute force is up to you, as long as you get the job done. You will meet additional characters along the way that may help or hinder your progress. When you converse with them, you always come to the same conclusion, but how you talk to them may unlock more of the story. If you enjoy unfolding mysteries than the story of Calvino Noir will intrigue more than it irks. The narrator leaves much to be desired as he sounds more like he should be telling a horror story. Some of the voices for the other characters also sound a little out of place as their accents seem a bit forced at times. This is why I say “cheesy old movies” seems to be the theme the devs were going for. The game has a serious tone, but it is making a little bit of fun of itself at the same time.

Calvino Noir has seven chapters spread over three acts. It is by no means a long game, but it is meant to be replayed. When I first played the game, I was mildly annoyed with the controls. I am very comfortable with a Dualshock 4 in my hands, but this felt like something that should be played on the PC (which, of course, is an option). I think the combination of the click boxes that pop up for you to interact with, along with the stair climbing mechanic gave me these impressions. The stair climbing is terrible with an analog stick, but if you use the D-pad, or PC players use the arrows, it works great. Also, the L1 and R1 buttons make the click boxes very easy to manage as you can choose what to interact with. There will be many sections where multiple interactions surround you and choosing the wrong one by mistake can get you killed. These are things that I had to learn because Calvino Noir has no instruction manual and there really is very little in the way of a tutorial. Some will love to hear that, but when the controls are not immediately clear, that can be a pain. The flashlight is probably one of the coolest parts of the game. You do not have to use it and sometimes it can work against you, but you cannot find the game's coins (which allow you to buy upgrades) without it. It seems silly that you cannot pick up a coin or key just because it is not shining, but it makes searching the game area thoroughly a requirement. Even though the flashlight will never run out, there are times you will want to turn it off. Guards can see your light, even through the keyhole of a closed door and it can alert them to your presence. The guards are pretty stupid, but if you hide while they are looking at you, they will still take you out. Then there is the switch and follow buttons (please add some descriptions via update). The character swap button is a no-brainer. When there is more than one active character on a level, it switches control. The follow button is not so self-explanatory but when you are close, it will make your partners follow you while you hold it. The controls eventually grow on you and feel natural. Regardless, a simple update to add even a single page telling players how everything works would be invaluable.

Calvino Noir is visually impressive. The detail of the building interiors is beautiful and the lighting effects are nothing short of amazing for a game like this. The fog effects make it seem almost alive and your crappy flashlight does little to cut through it just like in a real fog. The rain and wind are almost felt as you see Wilt's tie and jacket blow back when he is outside. I see the potential for more to be done with environmental effects, especially considering the stealth elements of the game, but I do not want to complain about what-ifs. I love how the shades of gray alternate depending upon which character you control and whether or not you are approaching a dangerous area. It is a shame that you cannot explore the beautiful backgrounds to go into more buildings and such. Maybe if the game gets a sequel or expansion there will be even more to enjoy in terms of the sights and sounds of Calvino Noir. Watch the trailer if you have never seen it before and you will get an idea of what I mean.

Calvino Noir is not perfect; the controls were not as pick up and play as I would have liked, but they do grow on you. I feel that could have been taken care of by an instruction manual or quick tutorial. There are not a lot of controls to learn, but knowing them can mean life or death in this game. This is also the type of game that people would want to do a speed run through. I think that being able to pick things up without first shining a light on them would have made more sense. A lot of gamers memorize things like that. Either that or have coin locations procedurally generated every time you play so that the flashlight really is necessary. I like how one has to be careful with things like turning off the flashlight and closing doors. I also enjoy the stealth takedowns although the way they are enacted is not terribly cool looking. There is plenty to love in Calvino Noir and plenty that could be tweaked as well. I think that a lot of people will enjoy this game and that it definitely needs to be experienced; however, the shortcomings of the game do not warrant a $24.49 price tag. I think that $15.99 would be the sweet spot for this title. If you can get a deal or if there is a sale/price drop, you should definitely check out Calvino Noir.