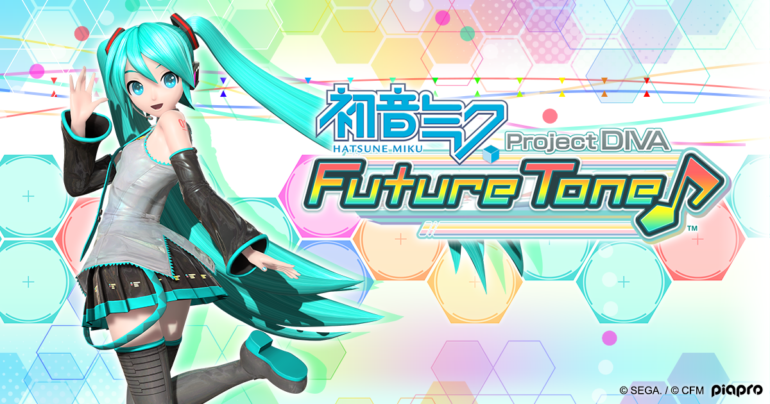 At the end of last summer, R.A.G.E. Works took a look at a rhythm game called Hatsune Miku: Project DIVA X. Hatsune Miku is the popular vocaloid from Japan that has captured hearts worldwide. That game had a simple goal: Help Hatsune Miku and her friends sing in order to restore power to her world. Things seem to move quickly in the vocaloid world. Less than a year later we already have a second game on the PS4 in the name of the digital idol. There is even a PSVR version! Sega brings us Hatsune Miku: Project DIVA Future Tone and it's time to see how it lives up to the first game.

What is Project DIVA Future Tone?

The unfortunate part of Hatsune Miku: Project DIVA Future Tone is that there is no story to be had. As much as I personally complained about how much her crew would babble on and on (and on), I must say that I miss having the cutscenes between songs. There is something to be said about presentation. I am not going to hold this against the final score of the game however. As I break down the game's format, things will make more sense.

Hatsune Miku: Project DIVA Future Tone is a comprehensive collection of songs from many previous games. With a song count checking in at over 220, you can expect to have some tired fingers (and eyes) as you try to collect all of the modules (stage costumes). The game bundles two smaller titles together: Future Sound and Colorful Tone. You can choose to buy either or for $29.99 each but the full package saves you six dollars ($53.99). The Future Sound Pack collects the following previous titles: 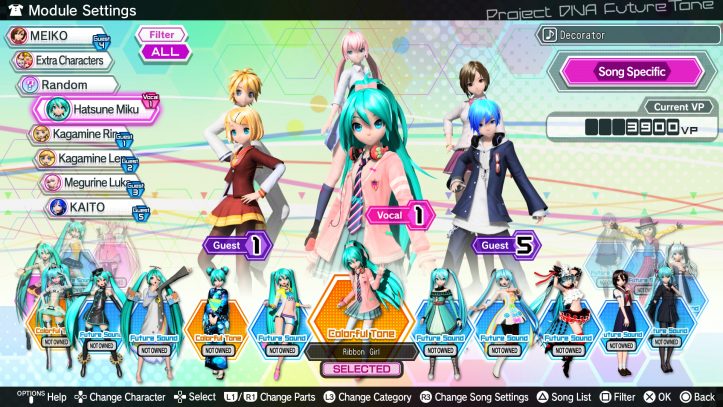 Your Reflexes Are Not Ready

In Project Diva X, Hatsune Miku was “powerless” at the beginning. She was unable to perform until you as the player helped her. In the absence of a narrative, all of the vocaloids have their full range of abilities ready to go. What this means is that while Project DIVA X eased you in and gradually turned up the difficulty, Future Tone expects that you are more in touch with its rhythm. The game plays the same as its predecessor, but there are more controls to remember and a lot of combo moves coming at you at once. Even on easy, this game may be dangerous to those who suffer from epilepsy or motion sickness. Think Dance Dance Revolution, but with your hands. . . on Dark Souls' highest difficulty.

Modules of course make their return and they are in force! Each vocaloid is as much a model as they are an idol. Looking great on stage is part of the performance. Your module, combined with your accessories can help improve your scoring. Getting a high score gives you more VP (currency of the game) which allows you to purchase clothes, accessories, etc. It is a vicious cycle, but one that you will quickly get addicted to.

Gaining that VP is where the fun (and madness) come in. I thought that I had gotten used to the world of Hatsune Miku because of my mild proficiency in Project DIVA X. along with the 4 main buttons and analog sticks, now you have to be ready to hit multiple buttons at once and transition for combo points. This game will definitely test your hand-eye coordination as well. Instinctively, you will want to watch the performance and there is a video mode to do that. When you are playing however, you have to watch for which direction the icons are coming from so that you can time your button or stick pushing correctly. It gets maddening on higher levels. 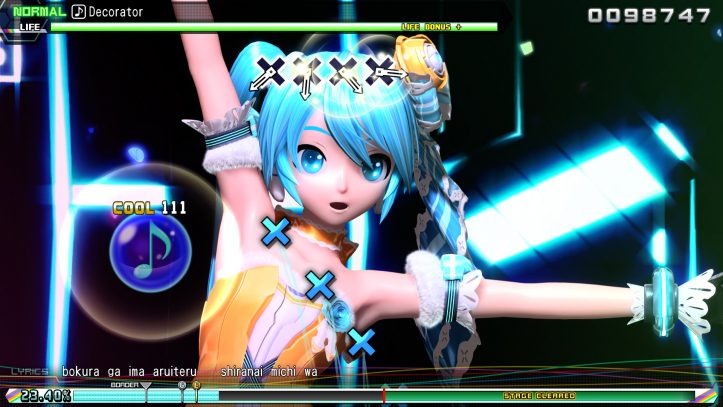 Like many anime characters, Hatsune Miku has the superpower of cuteness. Throughout her entire series of games, regardless of hair or clothing style, she has an endearing look that draws you in. Her friends are similarly designed to appeal to both male and female crowds with a very simple, yet pleasing art style. In Hatsune Miku: Project DIVA Future Tone, players will immediately notice a very solid framerate that provides for beautiful animations. When you aren't scrambling to hit every not and get a “Cool” rating, you are basically watching a bunch of J-Pop animated music videos. Know that there is a mode to just watch the videos any time you need to rest your hands.

Hatsune Miku and friends are kind of like digital Barbie and ken dolls and that dramatically increases the gameplay and replay value for fans. Sometimes when a game has alternate costumes you can see the seams or something where things do not look quite right. The developers put a lot of effort into making sure that does not happen here as costume change is a huge part of the game. You can pretty much put any module combination you want on the characters and it never looks fake. In this sense, players can infinitely make Miku theirs and create custom performances. There will be something for everyone and anyone wanting to devote time to this game. 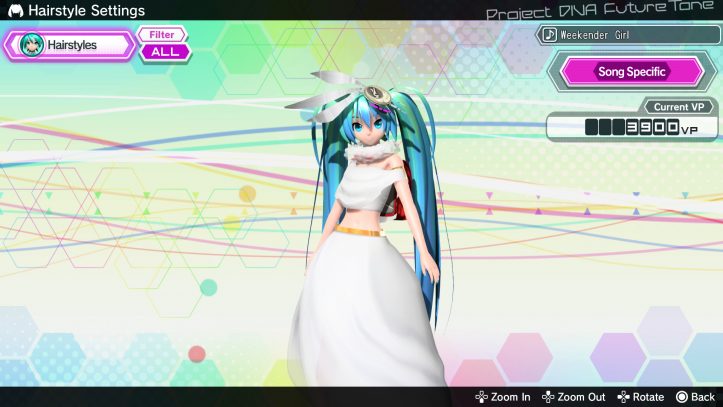 Hatsune Miku: Project DIVA Future Tone is a compilation title. Think of it as the Mortal Kombat Trilogy of rhythm games. It is primarily for the hardest of the hardcore fans. However, it still has plenty of value for newcomers as you are able to ease into the gameplay with lower difficulty levels. I came into the series with Project Diva X and for that reason, I was disappointed that this title has no story mode. The characters can be a bit annoying when they talk for too long, but the narrative had a bit of charm that anime fans would especially enjoy. That absence makes the game feel like an arcade game. While that is far from the worst thing in the world, we are not at an arcade here. In all, Sega brings us the best of Hatsune Miku in terms of gameplay. Challenging on all levels, this is a fun game that I feel should be given a chance. Test your hand/eye coordination! Challenge your fashion sense! Find the limits of your sanity as you try to beat a song on extreme! Hatsune Miku: Project DIVA Future Tone brings the love home to you.

Slick's score: 4 – Challenging game; I miss having a story but the song roster is immense.
Slick's (reviewer) score: 4 – Lack of story mode hurts it. 100+ songs means tons of gameplay. Graphics do not push the PS4 but they are high quality. Animation is smooth even when button prompts are flying all over the screen.
Genre score: 4.5 – The only thing I think could make this a better rhythm game would be a dance pad.

Note for Potential Buyers: Hatsune Miku: Project DIVA Future Tone is a combination of Hatsune Miku: Future Sound and Hatsune Miku: Colorful Tone. You have the option to buy either game separately for $29.99 each or bundle them for $53.99 which is your best bet.