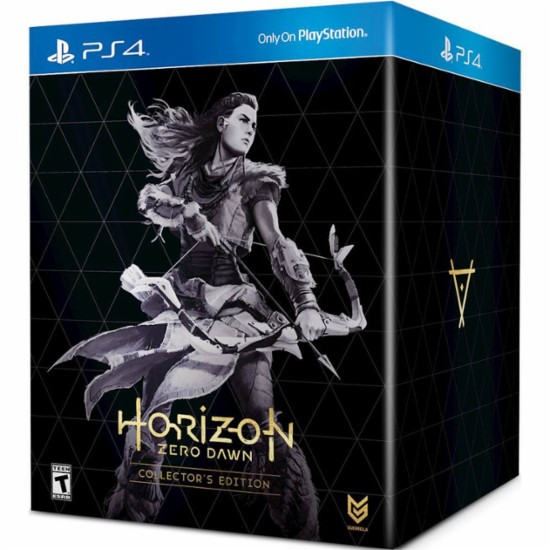 We all have games that we are looking forward to. As gamers, we hope in our hearts that these games will live up to our expectations. Every once in a while, there comes a game that we feel certain will not disappoint us. Back in 2015, during Sony's e3 presentation, I saw one such game called Horizon Zero Dawn.

A primitive-looking game set far into Earth's future. Sony showed us a six-minute combination of story and action. Developed by Killzone creators Guerrilla Games, the game looked extremely ambitious. now it is in my grasp and the time has come to see if I was right to put my hopes into it. 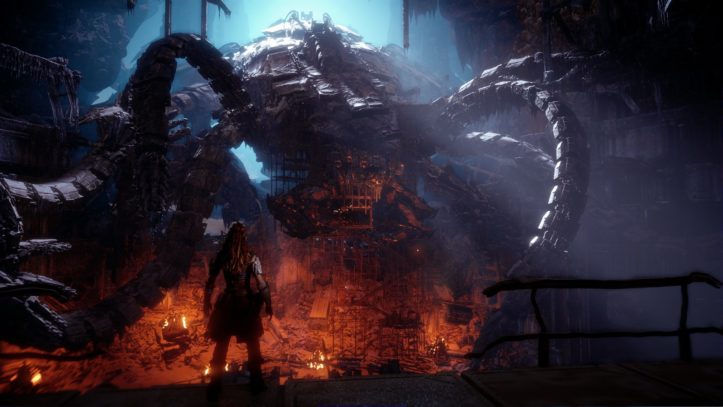 The story of horizon Zero Dawn is not a happy one. A millennium has passed since our time. We advanced technology so far that it took over and eradicated everything. I will keep the spoilers light, but somehow life on Earth began anew. With nothing but old, eroded structures and vehicles to see, people started as hunters and gatherers. One such tribe known as the Nora sprung up. A matriarchal society believing in family, spirituality and strength, they thrived in what they called Mother's Embrace.

The game opens with a child being named Aloy. Both she and Rost, the man who named her, are outcasts of the Nora. Aloy grows up and has many questions. She wants to know why she was outcast from birth; Rost can offer her no answers. Before she can learn the truth, the Nora are devastated in a raid by unknown assailants. Aloy sets off on a journey for answers and vengeance that will expand her world exponentially.

Horizon Zero Dawn is an expansive action-RPG that sci-fi fans will flock to. There is nothing particularly new about the story, but the plot is well written and organized. I would not be surprised to see this turned into a movie, especially since Hollywood seems out of ideas. If you enjoy storylines like those in Star Trek: The Next Generation or Deep Space Nine, this is a tale for you.

Aloy did train for a good ten years of her life (at least), but it still seems like she was born for this (*hint hint*). The gameplay here not only makes combat fun, but easy to learn. Horizon Zero Dawn is very open-ended in terms of how you play. Every enemy has a “best” way to tackle it, but the best way for you will always be up to you. Some like to use the Thunderjaw's weapons against it. Others like the insane challenge of fighting it head on. Then there are those who will set traps to kill it before it can get a shot off. Making your own way through the wilderness is part of what will make you eager to see what lies over the “horizon.”

The gameplay is not all sunshine and rainbows. There are some rare instances where the camera can get you in trouble in a fight. There is one such story-related battle where bad camera angles can cost you your life. We must unfortunately also come down on the jumping. Aloy is ridiculously agile; she can scale a sheer cliff to its peak in seconds. That makes it all the more frustrating when she cannot jump over a four foot high rock. The jumping is “semi-scripted” and only really works well at designated spots. it is not the worst system in a game, but it makes exploring a world you are dying to explore difficult at times.

The weapon assortment is quite astounding. There really are only a few types of weapons in the game, but they include various types of ammo and status effects. If you are having trouble with a certain machine, you are probably not using the right weapon or ammo. This is also where the notebook comes into play. There is a machine called a Stalker (think Predator mixed with Decepticon Ravage) that gave me a lot of trouble due to its cloaking ability. I learned late in the game that you can remove this ability by destroying part of its body. Scanning a machine puts all of its weaknesses in the notebook for you to review. This allows you to “play” with the mechanical monsters to a degree.

The weapon wheel is probably the best part of the game next to your Focus (the scanner I mentioned). Having access to up to four weapons on the fly is what makes combat so smooth. Some creatures will take so much damage that you will run out of ammo mid-fight. Being able to switch weapons or craft ammo while moving made combat a lot easier. You will likely stumble, fall and die during this journey, but Guerrilla Games made it so it is that much easier to pick yourself back up.

A True Work of Art

The e3 trailer I posted showed the game as it looked in development in 2015. We all remember the Killzone 2 debacle where the final game looked good but nothing like what was shown at e3. Guerrilla was not making that mistake again. The second video is from one of my live streams of the game and it is only in 720p. As you can see, the final product stands up to the original concept. I have yet to witness Horizon Zero Dawn in 4K (donate to the stream on Patreon!) but just look at the image above – that is using the game's photo mode and nothing was added except that logo.

The animation is smooth and lifelike, especially that of the machines. Guerrilla put a lot of effort into having robots based on animals actually move like real-life counterparts would. They are even looking to hire new animators that specialize in it now (possible sequel or DLC?). The one area that really needs some work are mouths in cutscenes. A patch was released last week to try and correct the “lockjaw issue,” but as of a stream I did on March 25th, there are still scenes where Aloy and some others look like they are speaking through their teeth. It is a minor gripe.

Put simply, Horizon Zero Dawn is the first must-own game for the PlayStation 4 in 2017. It has its small quirks and it is not a perfect game, but I dare say that it is already a 2017 game of the year candidate. The story is a slow burn; depending upon how you play the game it may seem like nothing is happening for a long time. That is due to a decent amount of side quests. If you play the, first, you will only push forward (somewhat) insignificant plot points in the present. The strength of the narrative lies in its connection to the past and what it means for the future of Aloy and her people.

The gameplay could keep you entertained for a long time. Playing to 100% completion will take you at bare minimum thirty hours and that is if you are really good at trashing machines quickly. You can play the game gung-ho, stealth or a combination of both. Setting traps makes Aloy's life much easier but you are not required to. Take on corrupted zones and hunting grounds to really up your skills and make sure to consult the notebook when in a pinch. Some people think it was a mistake to release Horizon Zero Dawn during the same week as a Zelda game. I think it was a brilliant way to try and establish dominance.

Graphically, Breath of the Wild has no chance against Horizon Zero Dawn, but graphics alone do not make a game. I will give a fair comparison of the two once I have gotten into the Zelda title. One thing I feel certain about is that these two games will rule the action-RPG genre this year. Right now I am inclined to think that Aloy will stand on top.

Slick's score: 5 – I absolutely love horizon Zero Dawn. I am not even done 100% and I want a sequel already.
Slick's (reviewer) score: 4.5 – some technical flaws but an ambitious new IP.
Genre score: 4.5 – Action-RPG fans must play this game and honestly, anyone that owns a PS$ should be playing it as well. It stands tall in its field.