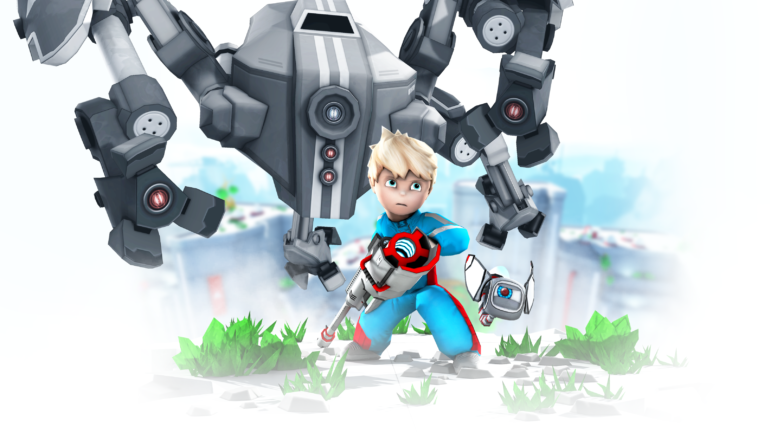 Kick & Fennick was originally a PS Vita exclusive. We all know that as consumers, exclusives are great. We get to brag that the other guy cannot play such and such game. However, from a developer's perspective, it can be very limiting because you can only reach a specific audience. That often does not matter when you have a large enough install base. Now let me ask you how many people you know that own and actively play a PS Vita. So now you understand why Kick & Fennick has been re-released for the PS4, Xbox One and Wii U. Let's take a look at this platformer and see if it was worth the trouble.

TROUBLE IN PARADISE Kick is a young boy who is approximately eight years old. Honestly, I am guessing that based upon the intro. The pod he was in malfunctions and wakes him up. It says that the incubation period was 2,847 days (7.8 years). It also identifies him as “Kick v7,” which is more than a little disturbing. There are several other pods laying about and I do not want to think about them containing Kick v8, 9, 10 and so on. What lies ahead is even more disturbing. A beautiful, futuristic society lay completely in ruin save for some robots. After some exploration, Kick finds two things: a large gun clearly made for someone older and Fennick. Fennick is a small robot that takes to him instantly – this also lends suspicion to my theory that Kick may be a clone. A third thing finds them, that being a huge sentry robot that seems to dislike humans. Fennick saves Kick twice in the span of a few seconds but damages its power core in the process. Kick decides he is going to save his new little friend and there we have the first five minutes of the game.

I may have made up a few things there, but I really like the story of Kick & Fennick. Honestly, I feel that it has all the makings of a really twisted sci-fi flick. The game is clearly not going to go into all the things wrong with a little boy waking up in a destroyed society, but I think Jaywalkers could make more out of this.

BFG v7 Kick & Fennick is a standard platformer that hails back to the SNES and N64 days. Jumping and shooting while searching for collectibles is the name of the game here. While that may sound a little bit mundane, there is the challenge of making the jumps safely. Many hazards like electrical currents and robot enemies turn Kick's journey to save Fennick into a deadly maze. We never get to learn whether Kick has any natural athletic ability because an eight year old carrying a gun that is bigger than them is not going to be jumping or flipping anywhere. Instead the gun becomes his major means of mobility, propelling him across gaps. Since the weapon is also Kick's means of attack, things get a little hairy in later levels where he must jump and shoot at the same time. Even that is not doing much for the game across forty-five levels. Add in bounce and teleportation pads that make you have to think fast to keep our duo safe. When all else fails, Fennick will save Kick from imminent death with a teleportation ray it shoots from its tail. This will zap kick out of danger to the last safe ground he was standing on. Unlike the game Limbo, Jaywalkers do not want to show a child dying horribly.

The game mechanic, despite being fun, is repetitive. The fact that kick cannot die due to Fennick's saving graces removes any real sense of urgency. Even as I play on hard the only real challenge is figuring out the less forgiving angled jumps. Kick & Fennick reminds me somewhat of last year's Snoopy game, with the only real challenge being finding all of the gears.

ELECTRIC RELAXATION There is not a lot going on in the world Kick & Fennick live in. If there are people, they either live elsewhere or they are hiding from massive sentry robots like the main antagonist. Regardless, the world surrounding our heroes is beautiful. despite being overrun with vegetation, most of the technology still works and this provides for a clean, colorful backdrop. The camera seamlessly pans in and out or captures the action from different angles depending upon what is happening. The animation is smooth with a solid framerate. The only slowdown is that which you activate when you aim your gun. I have yet to notice any hiccups if there are any. You get the most appreciation for the framerate in areas where there are multiple bounce pads and/or teleport pads. These will truly test your hand/eye coordination as the duo zip across the screen. Speaking in terms of 2016 alone, you will love this game if titles like -Klaus- and The Deadly Tower of Monsters caught your eye. Platformers are making a comeback on the indie scene and I am loving it.

Kick & Fennick have definitely found a new home on the PlayStation 4. If you never played it on the Vita, you will immediately recognize that it was a portable game. The ability to come back to the menu after each levele annoyed me at first. I then realized two things: first that I was the one who activated it (DERP!) and that it is a welcome feature. Unlocking costumes in games can be a pain when you have to stop it in order to change. The in-between menu feature lets you do that with minimal game interruption. While in-game, the only thing that I found slightly needing improvement was the use of the gun to jump. Even that mechanic did not feel broken so much as maybe I just needed to get a lot better at it. The learning curve is very smooth; as challenges present themselves there would either be a screen telling you how to get past it or it would just be elementary. Kick & Fennick allows new or younger gamers to jump right in and have fun. It then has enough of a challenge to keep more seasoned gamers interested. It may not be perfect, but few games are. TO Abstraction, I seriously would love to see a sequel to this game. My ideas on the story might be a little dark, but there are a lot of different directions you could go. I really hope to see more from this pair.