Slick’s Nit-Picks: Marvel’s Guardians of the Galaxy: The Telltale Series

Marvel is everywhere in the entertainment scene these days. While there is a strong push to reinvigorate the comics end of the business, the main focus is on the cinematic universe. Currently moving towards the end of their “Phase Three” of films, fans in the know expect the Infinity Guantlet and Thanos to play a major role. Out of all the heroes we have seen on screen thus far, the only ones that even know of the Mad Titan's existence are the Guardians of the Galaxy. With their second movie hitting theaters next month, the hype is already building. How do you push it over the edge? Collaborate with Telltale Games to create an unrelated story that features your Phase Three major villain and the team that will probably encounter him first. Enter Marvel's Guardians of the Galaxy: The Telltale Series. Episode One, titled “Tangled Up In Blue” is a lot more than just a Bob Dylan reference.

Heroes of the Galaxy?

NOTE: This story features the same version of the Guardians of the Galaxy as the movies, but it does not tie into the Marvel Cinematic Universe in any way.

Our story starts aboard the Milano as Star-Lord receives a distress call from the Nova Corps. They have engaged Thanos and are in desperate need of help. Being the heroic, adventure-seeking mercenary that he is, Peter Quill leads his team into combat and things go about as well as you would expect facing off with Thanos. The Milano crash lands on an unknown planet as the Guardians tail Thanos to an ancient Kree temple. After the ensuing battle, Star-Lord holds an item that is known as the Eternity Forge. Everyone seems to want it, but one individual will cause the Guardians more trouble than possibly even Thanos: Hala the Accuser. If you thought Ronan was bad, you have not seen anything yet. A dance-off is not going to win this fight.

I kept things a bit vague to avoid spoilers as much as possible. I said that the story is not tied to the movies, but Telltale used the same winning formula of storytelling. Combining the narrative with great music from the 1970s and '80s makes for a story you just cannot get enough of. The sarcasm of Peter and Rocket will keep you laughing as will the dry wit of Gamora. Drax' inability to get a clue is (un)intentionally hysterical. There is just enough levity to balance the weight of the situation the five are surrounded by. Whether you be a fan of the comics, the movies or both, there will be much for you to enjoy. 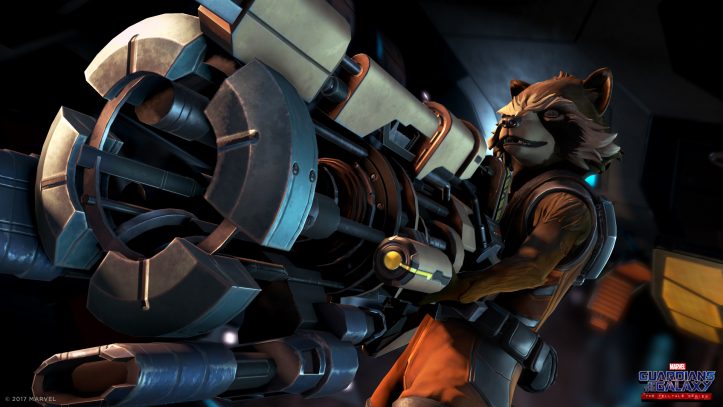 There is not much to say about the gameplay of a Telltale game. It is something that you will either love or hate. In essence, all Telltale titles are point and click interactive stories. This may very well be why they replaced the word “game” with “series” in the titles of their works. Every now and again the devs will try to throw something different into the controls. The only time I can remember that not being so great was the combo introduced in The Walking Dead: Michonne. The hardest part of controlling one of these titles is maintaining your hand-eye coordination during action sequences. The formula of using quick time events has never let Telltale down and serves Guardians of the Galaxy quite well. 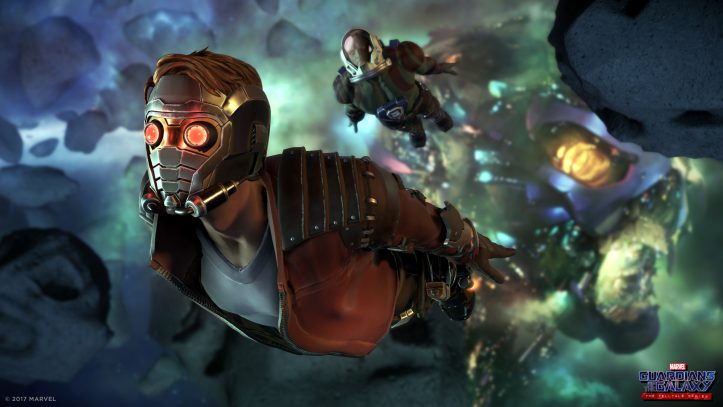 Guardians of the Graphics

Telltale Games' strength has always been in their name: they tell tales. The graphics had never been anything to write home about. Either they were going for a particular style or staying true to the source material (ex. The Walking Dead). Last year, they took their first shot at the two big comic companies with Batman. Immediately, you could tell that the artists were trying to bring realistic and polished look to their visuals. This has carried over to Guardians of the Galaxy with much improved visuals. Longtime Telltale fans will remember Tales from the Borderlands. Tales and Guardians share a similar graphical style, but the difference between the two is like the difference between a PS2 and a PS3 game in terms of detail, lighting effects and field of view effects. That is not to say that this game is without its flaws. A/V sync tends to be off for a second or two when a new scene starts (it does correct). There are several instances of tearing which scream of the PS3 days and there are slight performance issues. During my live stream there was an instance where the game froze but thankfully recovered.

Star-Lord, Gamora, Drax, Rocket and Groot are not the original Guardians of the Galaxy. They came to be in marvel Comics during the 1980s. This is why you always hear Quill listening to music from the 70s and 80s. That tape his mom made him is the only Earth music he has. It definitely helps set the stage for this game. The opening scene, set to Why Can't I Touch It by The Buzzcocks is not only awesome, it foreshadows what happens to Star-Lord. The same can be said for the title of this episode, “Tangled Up In Blue.” This references a 1975 Bob Dylan song. I will not go into how this is relevant to the episode (it's a huge spoiler). I just have to give big props to Telltale for choosing great music that fit the story so well. Add Livin' Thing by Electric Light Orchestra with You Make Me My Dreams by Hall and Oates and you have a story that must be heard as much as seen. 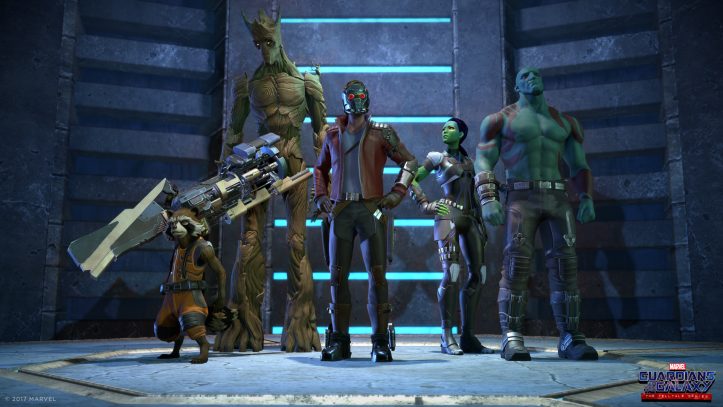 My first Telltale experience came from the first season of The Walking Dead. When I finished the final chapter, I had to walk away from my PS3 for a while because the story messed me up emotionally. I have played every one of their releases since then and they all managed to get me invested in the characters. The exception was Game of Thrones. In that one I was just desperate to keep anyone alive. Guardians of the Galaxy continues that trend of wrapping you up in the characters. Star-Lord is a jackass, but you care about him because we can all identify with the things he has gone through. You play a Telltale game to get a good story and Tangled Up In Blue looks to have started a promising one.

There are technical hiccups throughout the episode. I mentioned that at one point I thought I would have to shut the game off in order to proceed. I hope that Telltale addresses these as they have with previous titles. There is a lot to like in this new series and it will still be around when the new movie is out of theaters. Fingers crossed that Telltale continues to raise the bar as the story progresses.

Here is Marvel's Guardians of the Galaxy: The Telltale Series, Episode One – Tangled Up In Blue, in its entirety. Commentary provided by yours truly.

Slick's score: 4 – While it is an original story and one I want to see through to the end, Guardians does simply use the winning formula of the movie. Not a bad thing, but I guess I wanted more. Points for using Hala the Accuser.
Slick's (reviewer) score: 4 – Standard Telltale fare; graphical improvements fall short due to slight performance issues. Telltale can still do better.
Genre score: 3 – While  Ido recommend this title to Telltale fans, Guardians (as yet) does not stand above previous Telltale titles. Without the music, it might rank lower than Minecraft: Story Mode.