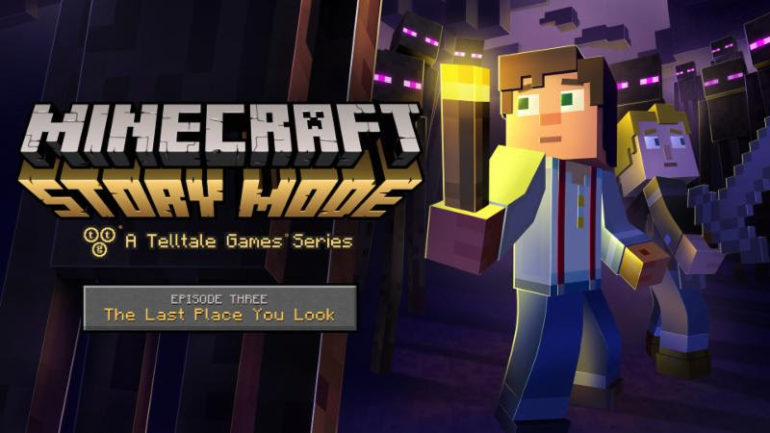 If only things were this easy

Minecraft: Story Mode released its third episode today and hits the midpoint of its story. “The Last Place You Look” is a highly anticipated download for fans of the story as the plot took a decidedly darker direction in the previous episode, “Assembly Required.” For at least the past two years, all of Telltale's titles have been M-rated, adult-themed stories. As such, violence, death and even the apocalypse have been commonplace for those stories. Minecraft on the other hand, with its E10 rating, looked to be that light in the darkness that usually surrounds the Telltale brand. As with every dream, you have to wake up sometime and with this one you come to one, terrible realization: there is no light in The End.

mild spoilers from Episode 2 ahead

NO MORE GRIEF Having found Ellegaard and Magnus, the search for Soren did not go so well. Things had turned especially sour with the appearance of Ivor at Soren's temple. No one was hurt and nothing was lost, but Ivor seemed to now be pleased with the state of things. He showed unwillingness to help you stop the Wither Storm and escaped before you could get any other information out of him. With Petra (or Gabriel's) situation getting worse, Jesse needs to figure a way to move forward before desperation swallows the group. Having finally escaped the room that Ivor trapped them in, the heroes moves forward. Not realizing how far down they had traveled, monsters come from all directions as Jesse and company find themselves in a grinder. Jesse once again has to rely on the others for advice when decision making becomes difficult. The team is not as tightly knit as it was initially and it will come apart at the seams if steps are not taken. This is the most exciting chapter of the story so far. You really have to be careful because turning that next corner really could be the last place you look. Also, in this chapter of Minecraft: Story Mode, prepare to take a trip to The End, get creative with sheep products and listen to a pig tell raunchy jokes. If you were amongst those that were not blown away by the last episode, you should be happily surprised this time around.

Yeah, they slid that in there.

YOU'RE DROPPING WHAT? In the last review, I said that I would be pretty much skipping the gameplay and graphical sections of the review unless there was something of note. What stood out in this episode is that there was more action and quite a bit more compared to the previous ones. Episode three is monster heavy, so there are plenty of QTEs and there are even two instances of crafting. Trophy hunters should prepare for a little bit of repetition as you need to talk to Reuben a lot to complete the trophy set. Aside from that, everything else is par for the course.

Episode three of Minecraft: Story Mode may throw players off a little, but that is what will make them enjoy the experience. Of the three released episodes, this would be the “action” segment of the story. I can only hope things get crazier from here. Jesse goes through a lot of character build here and your friends all notice this and give their opinion of you. I liked that in the story because it helps to make the player feel more like they are doing something. This is an interactive story and we are effectively along for the ride so Telltale's efforts to make you feel more in sync with Jesse are noted and appreciated. If their fate is still up in the air, I want to ask that Telltale leave Magnus/Ellegaard alone. The events of chapter 6 really drive home the urgency of the mission and if you change that it will weaken the plot. I would also like to see the pressure continue to increase in the last two episodes. The original threat has pretty much quadrupled so the player should feel that with even more action. This is just how I personally see the direction of the story going. This episode has been my favorite thus far and I hope to be able to successively say that for episode four and five. The End was already seen in this episode so the ending needs to be something spectacular.