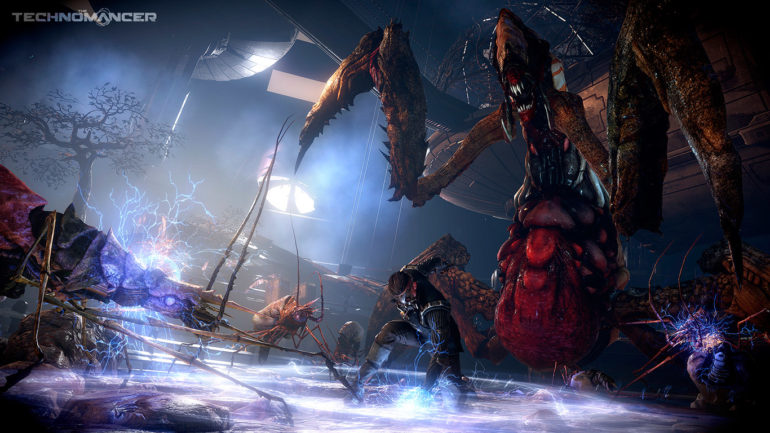 The Technomancer joins a special sub-genre in the RPG category of games. I call action RPGs special because they do not specify a game as a jRPG or worry about where a game originated. There is no turn-based combat and players need to be on their toes during a fight. If it sounds like you beat people up to gain experience, you are on the right track. The question lingers as to why one should care about The Technomancer since there are plenty of other games like this. Well, that all depends upon how you feel about sci-fi classics like Mass Effect and KotOR. Tto give you an idea of how the combat flows, if Jade Empire was your cup of tea then you will want to read on. I am going to break the game down and see if it is worth a drop of the precious water the people of Mars fight for.

THE THIRST IS REAL Mars was terraformed many hundreds of years ago. At some point during this mission to make a home away from home, Earth gave up on her sister planet. The people that were there were left to fend for themselves and make do with what they had. We pretty much all know Mars to be a desolate, dusty planet where (to date) little to no water exists. This is the backdrop for our story. Water is basically gold and everything revolves around obtaining, controlling and protecting the resource. Due to the lack of a proper atmosphere, much of the populous have mutated into what we could only call subhuman.

In order to both protect and police the citizenry, some are bio-engineered and altered to wield electrical energy. These battle mages are called Technomancers and you play Zachariah, a rookie amongst their ranks. Your story will unfold based upon the choices you make but you will ultimately alter Mars' future as you develop your skill and rise in the Technomancer ranks.

This is what drew me to this game a year ago. Before games and for as long as I can remember, I have loved a good science fiction story. The background of Technomancer may sound like a side story from Total Recall but it still held a lot of promise. Unfortunately, the story progression is left too open and the narrative falls a bit flat because everything boils down to Zachariah's choices. What I mean is that some games are way too linear and no matter what you do the same events transpire. In this game, the focus was a bit too heavy on player choice and it hurt the overall narrative. Despite multiple endings, things feel feel cliché as if rolling off an assembly line. I came into this game comparing it to titles like Mass Efect and KotOR but it fails to have the strong writing of those classics.

DODGE! Aside from the story presentation, I found myself looking forward to Technomancer due to its gameplay. As an action RPG, the ability to switch styles reminded me of Jade Empire. The early gameplay videos felt like something out of a Batman game. You can utilize three combat styles. The (warrior) staff is the most acrobatic of the styles. You focus on a stick and move philosophy to keep your damage down. Using the mace and gun (rogue) puts you in the thick of things. While not as fast as using the staff, the principle is to put your foes down before they can get to you. The mace can bludgeon and shock while the gun gives you some range. Finally, we have the (guardian) mace and shield. This would be the slowest of the three styles because of the shield but utilizing it properly serves a double function. Obviously it protects you from strikes and projectiles but it also allows you to parry and set up blows from the mace. Materials you find on your journey can be crafted into upgrades and new gear for all three styles. While you chose a primary style at the beginning, you can change up in and out of combat as the need arises.

The styles not only benefit you but your companions as well. They will also choose a style and your performance protects them and allows them to dispatch enemies. This brings us to releations with your team. Every character has their own personality, attitude and belief on how things should be done. You have to balance your approach to them in order to try and keep your comrades happy. The benefit is that those who are agreeable with you can figuratively open new doors storywise. Some may become intimate with you depending upon how you treat them.

Making interaction with your team mean something can make for a great game mechanic. The problem with the Technomancer is that it doesn't mean enough. The characters themselves are pretty much all throwaway to the point where you don't care enough about keeping them happy. The combat is less than satisfying as well because you never quite feel like the badass you should be. Zachariah is essentially a walking lightning storm. guys with guns should not be picking him off because he is busy dealing with their buddies. One could easily say that getting better at combat is the answer but it always seems to boil down to a dodge button spam-fest. The trailers make the combat look so fluid and fun. Some of those elements do find their way to the game, but not enough of them.

STRONG SHOWING Sometimes you see a game in its early stages and think to yourself that with a little polish it could be great. This was not the case with the Technomancer. From the earliest visuals presented, this game looked fantastic. The graphics look like they belong on the PS4, something not every game is doing lately. The lighting, especially that used for electrical effects, really make the game pop. If you are playing on a 4K TV or even a good HDTV, your eyes are in for a treat. It is a shame that Mars barely has water because the water effects show the amount of work the artists put in. The creature design is downright horrific and I love the attention to detail on how each different beast moves. The only shortcoming in this department is the music. It is pretty bland does not get you pumped. The first boss is a giant, mutant crab/spider/praying mantis thing that deserved a strong musical piece all its own. When it emerges and the fight starts, it feels like the music just takes a break. It is there but it is so laid back you have to question if you are in a boss fight. Spiders definitely put an inordinate amount of effort into the look of Mars and it should be commended; it is a shame that the same was not put into the musical score.

The quick and dirty answer of whether or not I like The Technomancer is yes. The problem is that I (personally) was really looking forward to this game and I feel that it did not deliver on the hype it set up for itself.The backstory of the game is amazing in the sense that it sets the stage for a great narrative. unfortunately, this falls flat as the game progresses. A similar situation lies in the gameplay mechanics. All the ingredients are there for a classic but the execution delivers something mediocre. The true shine of the game lies in its visuals. Technomancer is a very pretty game and the effects are worth note. Unfortunately, what should be a one-two A/V punch does not stick the jab. The music is uninspired and boring, particularly so during combat moments. Technomancer is worth playing; there is something to be enjoyed in the game and the product is not terrible. Unfortunately, this is one you should wait for a sale on.