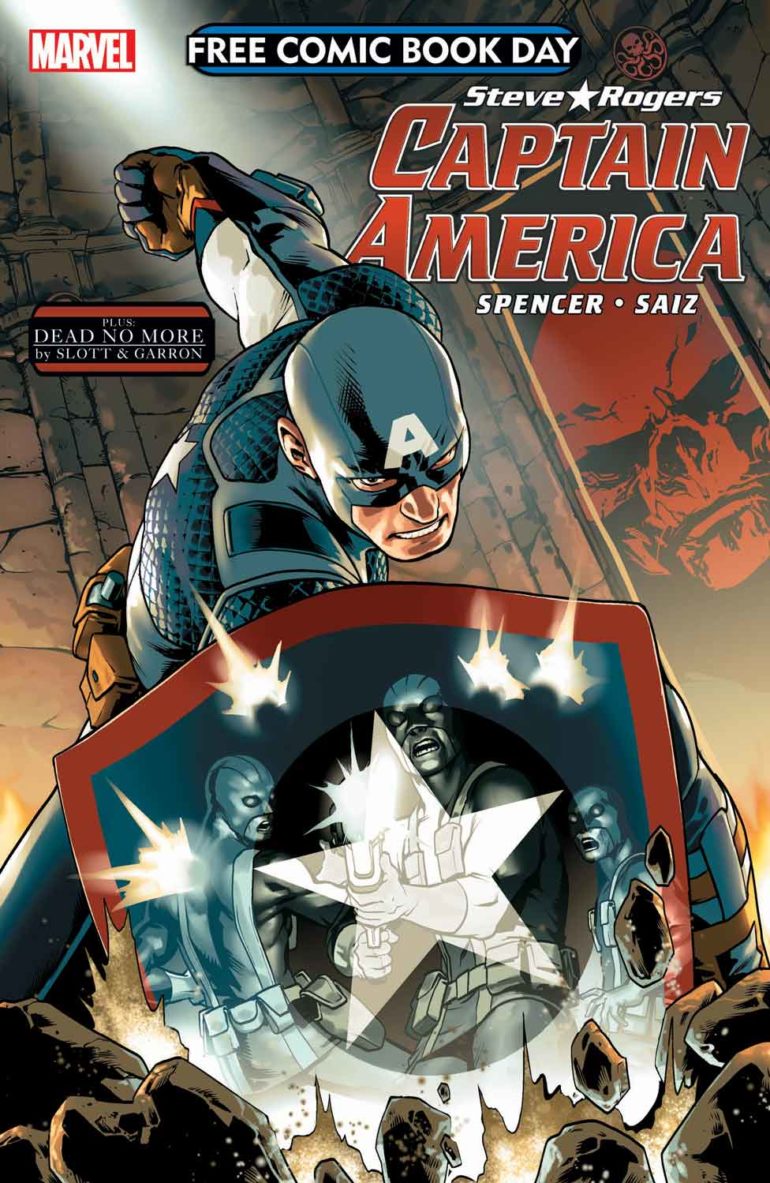 Marvel recently announced  a new Civil War and the return of Steve Rogers as Captain America and fans are definitely excited. Marvel announced that orders for free comic book day editions of Civil War II #1 and Captain America #1 have totaled nearly 1 million units. Free comic book day is prime time for fans to jump into key events and books and Marvel has done a great job over the last few years in making their free comic book day exclusives memorable for both old and new fans. Make sure to get to your local comic shop on May 7th to get your hands on both of these titles.

Plus Get Your First Look Inside These Highly Anticipated Issues!

New York, NY—February 29th, 2016— Free Comic Book Day 2016 is your perfect chance to dive into the Marvel Universe. With two can’t miss titles – FCBD Civil War II #1 and FCBD Captain America #1 – Marvel is bringing the best creators and the boldest stories to the festivities. But first, Marvel is pleased to announce that Free Comic Book Day orders have totaled nearly 1 million units, and we’re celebrating by providing fans their first look at the four stories waiting for them on May 7th.

“Year after year, Free Comic Book Day has proven to be one of our most successful tools for engaging fans and the industry with things on the horizon for the Marvel Universe,” says Editor-in-Chief Axel Alonso. “WithMarvel’s Captain America: Civil War film hitting theaters that same weekend, we’re excited to give fans a peek into the upcoming Civil War II comic event as well as the new Captain America: Steve Rogers series. Plus some exciting happenings for Amazing Spider-Man and All-New, All-Different Avengers.”

Featuring only brand new content, Free Comic Book Day is your first taste of the massive events, storylines and new series set to debut later this year! First, FCBD Civil War II #1 ignites the fuse of the blockbuster comics event of 2016. Be there as Brian Michael Bendis and Jim Cheung beat the drums of war and fire the opening shots! Then, don’t miss the exciting second story of that issue as Mark Waid and Alan Davis introduce you to the all-new Wasp! Who is she? And what does it mean for the All-New, All-Different Avengers? Then, pick up the shield as Steve Rogers steps back into the spotlight in FCBD Captain America #1. The original Sentinel of Liberty has returned, be there for one of his first missions back on the job – brought to you by Nick Spencer and Jesus Saiz! Finally, Dan Slott and Javier Garron bring you the prelude to DEAD NO MORE, this year’s Earth-shattering Amazing Spider-Man storyline!

“We’re so thrilled to be able to bring our biggest guns to this year’s Free Comic Book Day stories,” says Marvel SVP Sales & Marketing, David Gabriel. “Thank you to retailers for their support in ordering nearly one million copies of these titles and continuing to bring new fans into stores. Believe us, all four of these stories across both issues will set up some big things to come in the Marvel Universe. You won’t be disappointed.”

Want to be on the front lines of what’s happening in the Marvel Universe this year? Then you don’t want to miss these! Make yours Marvel with FCBD Captain America #1 and FCBD Civil War II #1, available exclusively in comic shops on May 7th!