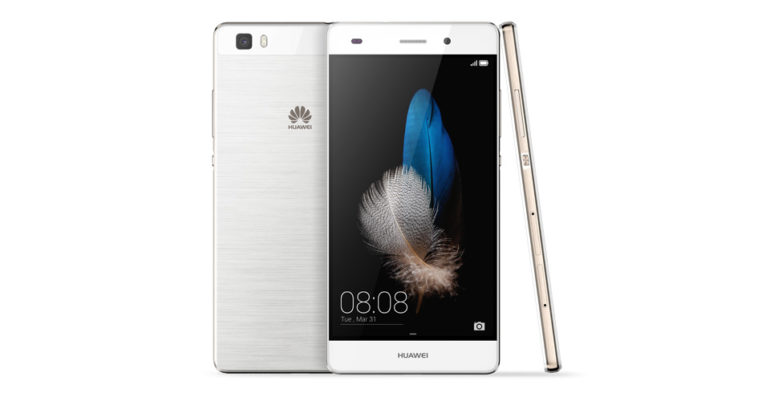 While mobile phone connoisseurs have always had their choice of either Apple, Samsung, LG, Sony or Motorola devices, companies like Huawei have slowly been creating solid handsets and making a name for themselves in the very crowded handset arena. We recently got our hands on the new Huawei P8 Lite and are looking forward to seeing if this phone is a home run or a miss from this surging Chinese company.

At first glance, you will be impressed with the quasi-Apple look the P8 Lite has, but what you think is aluminum construction is actually plastic. The construction is a far departure from the premium materials used in their P8 model, which had a more sleek design and a sturdy build. The plastic construction may turn off some, but I personally felt it did not detract as much as I expected, which you would think is crazy coming from someone who uses a Note 4 as their daily handset.

Controls are easily accessible on the right side of the device and the dual micro/nano SIM slots will surely make this a good phone for travelers or for those of us trapped in the dreaded two phone struggle.

The 5-inch screen, while bright and colorful, only offers a 720p resolution screen but does use Gorilla Glass. When comparing to its more costly sibling you can easily see that some corners were cut to keep the handset within an affordable price range.

Internally we definitely do not get budget “guts” as we get a zippy Snapdragon chip and decent 2GB of RAM.  Don't cringe at the “blink and it's full” 16GB of storage since this phone has a microSD card slot which is slowly but surely being phased out.

The P8 Lite uses a skinned version of Android which is cluttered and really not pretty to use. In the age of skins of course that can be rectified, but the underlying Android OS cannot. This phone runs Android KitKat which is not the worst thing in the world but seeing this shows how truly disjointed Android OS releases are. Multitasking on this phone definitely pushes the limits and at times slows things down considerably  so if you plan on a lot of multitasking you may need to tread carefully.

The P8 Lite has a surprisingly beefy rear camera with a f/2.2 lens and a 13-megapixel sensor.  The front facing camera is a modest 5-megapixels.  The camera delivers solid image quality with good lighting but the low performance leaves a lot to be desired which is unfortunate since the P8 has some decent low light quality and healthy amount of manual control features to help when capturing low light images. Check the sample photos and judge for yourselves.

While the P8 Lite delivers on the photo side, sadly it does drop the ball when it comes to video quality. The first thing to jump out was the lack of continuous auto focus which resulted in quite a few blurry clips and shaky cam since I had to tap the screen to focus constantly.  If you are more of a shutterbug then this may not be a deal breaker, but it definitely knocked a few points off for me personally.

Call quality via T-Mobile LTE was solid with no drops in the usual dropped call dead zones. The signal strength did fluctuate more than my Note 4 and Note 5, but calls were clear. The speakerphone is a bit underpowered and I found myself having to hold it close to hear certain callers. When actually holding the phone, the incoming voices are crisp and not tinny like most budget handsets. Only one person complained that my voice was slightly distorted, but a slight positioning adjustment eased that a bit.

The P8 Lite comes with a 2200 mAh which held up well during an 8-hour workday with minimal use but when the emails and texts poured in, the phone needed a charge at about 5-hour mark. Your results will of course vary when it comes to battery usage. Charging definitely felt like it took forever and while I think it is partially because I am spoiled by rapid and wireless charging the fact is that took almost 2.5 hours to charge.

The P8 Lite loses a lot of the flash that made it's P8 sibling a solid handset. I will say that as an entry level handset it serves its purpose and the less than $300 price point makes it attractive to most people looking for a low-cost handset for everyday use that takes calls, sends texts and takes the occasional picture. The issue with the P8 Lite is that it comes into a market where companies like Asus are putting out comparable handsets with beefier specs in a similar price range.