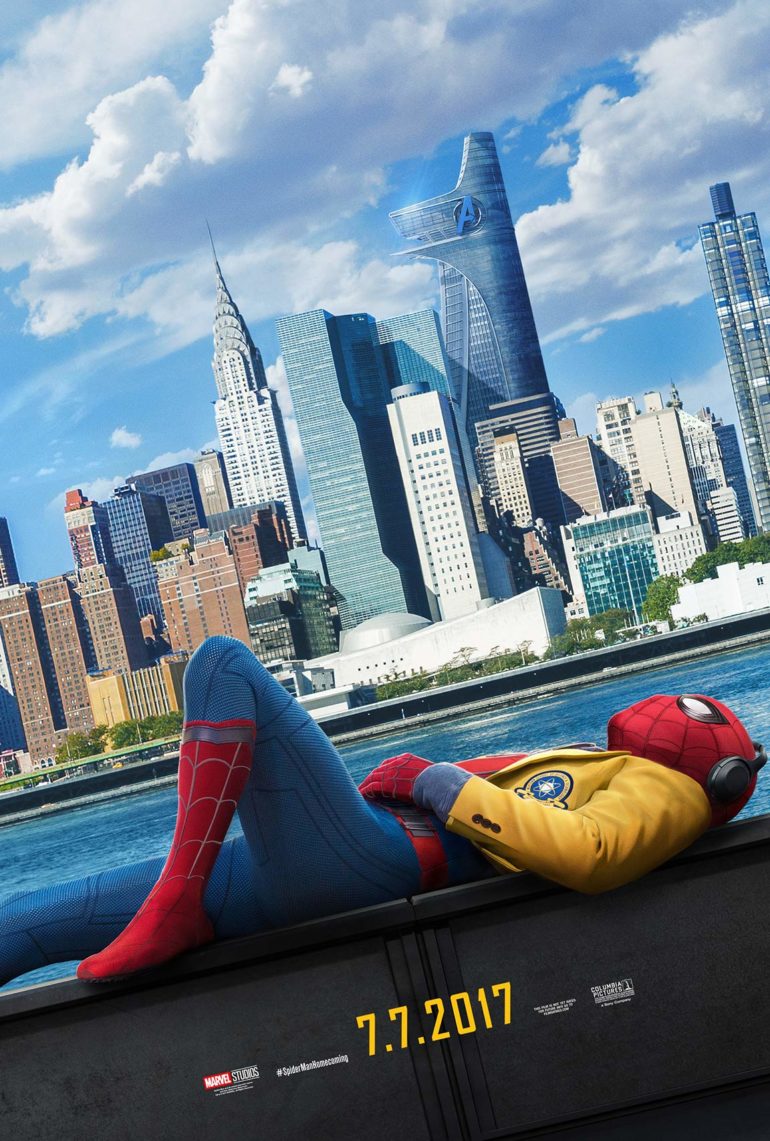 Peter Parker, with the help of his mentor Tony Stark, tries to balance his life as an ordinary high school student in New York City while fighting crime as his superhero alter ego Spider-Man when a new threat emerges. – via IMDB

The fifth Spider-Man film is finally here ladies and gents, and while we have had three different actors don the Spidey suit, the bigger story is that this is Spider-Man's first solo outing as part of the Marvel Cinematic Universe. Let's get right to the story, which takes place shortly after Spider-Man's involvement in Captain America: Civil War and finds our wall-crawling hero seeking to prove that he is more than just a local hero. The story and style remind me of the John Hughes films we all saw growing up, especially all the scenes that took place in Peter's high school. This was not a bad thing as it took us right into Peter's life without the bloat of an origin story. However, parts of it were referenced including the spider bite that gave Peter his powers and May coping with some alluded-to issues. The story was a healthy mix of teen angst and web swinging which will resonate with many of the film's younger viewers. The film borrows from the Spider-Man mythos but also cultivates something relatable to today's kids. That said, the story was not without flaws including my biggest annoyance which was the reveal of the hero's secret identity. Marvel and DC do this way too often and it is genuinely frustrating. In Spider-Man's case, it is huge as a lot of his stories have plot points heavily focused on him keeping his identity a secret. By the time the credits rolled, three people knew who Spider-Man was. Why do superhero flicks insist on killing the secret identity so quick so often? It is an annoying pain in the ass.

The film utilized a ton of diversity not just for Peter's classmates but also for some of the villains that were seen throughout the film. I have no issue whatsoever with this happening, but it did feel odd seeing Bokeem Woodbine playing a character named Herman Schultz (which comics fans will recognize and I won't spoil). Looking past diversity, there were genuinely some great standout characters in Peter's school including Jacob Batalon‘s Ned and Zendaya's Michelle. I had mixed feelings on this film's Flash but I think given time Tony Revolori will grow into the role.

The major players were solid in their roles with Tom Holland genuinely having fun playing Spider-Man and Michael Keaton making the Vulture more than an old man in a feathery suit. Keaton brought some great intensity and screen presence and I hope we will see more of him in future films as his chemistry with Holland was solid. I had mixed feelings on Marisa Tomei's Aunt May as there were some great scenes that played on her good looks and slightly younger appearance. I get that DC got away with it for Diane Lane in Superman but I just am not sold on a younger version of Aunt May. That doesn't mean Tomei wasn't good, it just means she looked a little out of place. I was concerned that Robert Downey Jr. would steal the show as Tony Stark and while he was aces as usual, he did not steal the spotlight from Spidey like I thought he would. It wasn't all sunshine and rainbows though, as I really disliked Jon Favreau's portrayal of Happy Hogan in this film. He came off petulant and at times a bit of an asshole and while I get that was because he was a glorified babysitter, it did not take advantage of the usual charm Favreau brought to the role in previous films.

Special effects as expected were top notch. I felt the effects for the Iron Man tech in Spider-Man's suit were well done. I also particularly liked the effects used for Vulture's wings and the additional uses they served throughout the film. Those subtle touches made a solid villain look like an even greater threat. I was not too happy to see no spider sense for Spider-Man as that is an ability that is key in his arsenal and while Kevin Feige has assured fans he has that ability, it was weird to not see it used and for the suit to essentially provide it to Peter.

Many people are saying that Spider-Man: Homecoming is the greatest Spider-Man film to date. I will sadly have to disagree, but while I don't consider it the greatest film, I do consider it a good start as a more formal introduction for the character in Marvel's Cinematic Universe. Spider-Man: Homecoming was genuine a shot in the arm for the character on the big screen and proves Sony should let Spidey be handled by Marvel.

This film took Spider-Man back to being a witty, wisecracking young kid who has to deal with all the usual teenage trials and tribulations while also trying to be the best hero he can be.

While I do recommend you go check out the film I know many will have their own opinions that will differ from mine. This film divided comic purists and casual fans for a litany of reasons and I definitely would love to hear your thoughts on the film.

If you have kids that love Spidey I feel they will enjoy the film immensely.

One last thing! Two after credit scenes for this film. Onwards to Thor: Ragnarok