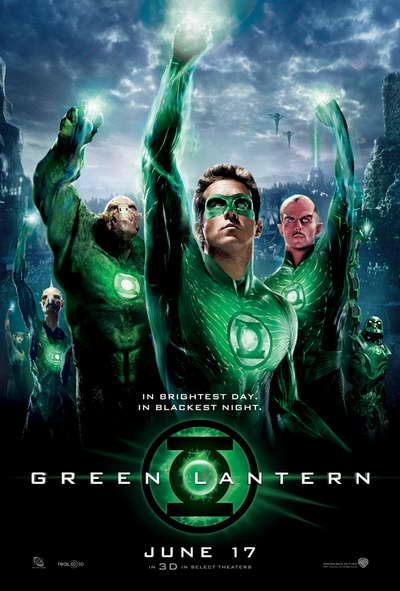 In a Marvel-controlled movie year, it is only fitting that DC releases a film about the hero who shines “in blackest night.” Green Lantern is the first big screen offering from the comic company since 2008. It is also the first to break the “DC movie pattern” meaning it is not a Batman or Superman movie. Ryan Reynolds is hoping that the emerald energy of willpower is enough to start a new franchise. Fortunately there's an army of fans numbering a lot higher than 3600 that share the sentiment.

Origin of the Green Lantern

The movie opens to a short narrative explaining just what a Green Lantern is and how they came to be. The Guardians of the Universe created the planet Oa in the center of the universe and forged a massive power battery to harness and store the emerald energy of willpower because it is the most powerful. the battery would power 3600 lanterns that in turn would charge an equal number of rings. these rings would travel to each sector of the universe and seek one that is without fear to become a Green Lantern. Earth is part of Sector 2814 and was under the jurisdiction of Abin Sur, one of the greatest of the Green Lantern Corps. When he was attacked and mortally wounded by Parallax he escapes to Earth and instructs his ring to seek out his successor. All of this takes place in the first few minutes of the movie, the remainder focusing on how Hal Jordan (Reynolds) goes from just wearing the ring to truly becoming a Green Lantern.

Much of the movie focuses on the relationship of Hal Jordan and his boss/friend/love interest Carol Ferris (Blake Lively). Reynolds captures the reckless, smart assed nature of Jordan extremely well and he looks the part of Hal's GL character. Hector Hammond (Peter Sarsgaard) is perfectly creepy and I embarrassingly laughed at his Stephen Hawking “impression.” I gotta give love to Clancy Brown for voicing Parallax. How can you not love the guy that voiced Lex Luthor in Superman: The Animated Series and Justice League? There was much less attention paid on the hero side of the film. Jordan's interaction with the GL Corps was limited but you got the gist of things. Sinestro's disdain for him was apparent and fans or anyone who saw the full movie will know that  is going to increase. Kilowog's tough love provided by Michael Clarke Duncan was spot on and it was a shame to only have about five minutes of him on screen. Tomar-Re, being a close friend of Abin Sur, took a shine to Jordan and was one of the Lanterns to help him realize his potential. I really hope the sequel focuses more on the Corps than Coast City.

Word to the wise, save the extra money and see this movie in 2D. the special effects were good enough but the 3D was an afterthought. Only some parts of the movie were even in 3D. At one point i took off my glasses and the screen was not even blurry. 3D aside, I see why they took extra time to do the SFX. The Lanterns all looked great but some of the visuals still needed work. Parallax basically envelops Coast City at one point and is all over buildings yet nothing is being destroyed. I highly doubt something that was there to wipe out humanity is going to gingerly caress buildings and carefully enter through broken windows. Then there was the scene shown in commercials where Hal saves a disabled helicopter. i understand the GL power is greatly based upon imagination, but a Hot Wheels track? Even his friend Tom (Taika Waititi) was like “dude, really?” Warner Bros. needs to really start spending less money on Kryptonite islands and more on special effects the crowd can believe and enjoy.

I supported this movie first and foremost because I like the character, even though being a fan of the Justice League series I am more familiar with John Stewart (the third human Green Lantern). I want to see more of the less popular characters on the big screen. This is not to take anything away from the following Green Lantern has (which is huge), but I am glad to see movies like this and Thor amidst the Batman, Spider-Man, Superman and Iron Man movies. Green Lantern really has a crazy history and if they delve into it, I see potential for some great flicks in the future. I only wish that, once again, they would follow the story that is already in place. I am going to go on a bit of a rant, so anyone who has not already seen the movie should stop reading with the end of this paragraph. Green lantern is a fun, campy movie that I really enjoyed. There will be an obvious sequel and I have high hopes for it.

People always tell me this reason or that reason why a comic book movie didn’t follow the comic book and nine times out of ten the excuse is utter horse manure. The only instance I can think of off the top of my head is Venom in Spider-Man 3. To tell that origin properly you would have to go into Secret Wars and a whole bunch of stuff. That is not the case with Green Lantern! Let’s start right off from the beginning of the movie and I will say once again that the Black Rage segment of this review is FULL OF SPOILERS. The biggest mess up is in Parallax. First of all, the being that was called Parallax should be called Krona because the only member of the Oan guardians to be cast out was Krona. He was not trapped by Abin Sur, he was sent to the Antimatter Universe by the other Guardians. Parallax is Hal Jordan himself after being possessed by the Parallax Entity, the embodiment of the yellow energy of fear. Abin Sur was mortally wounded by Atrocitus, during which time said entity was trapped in the main battery on Oa and was known as the yellow impurity, the reason why Lanterns were vulnerable to yellow.Hector Hammond was never possessed by the Parallax entity but he was possessed by the Ophidian entity, the embodiment of the orange energy of avarice. That goes into the whole blackest night story and that could have been a series of movies. The Guardians did not create the yellow ring. It was created by the Qward, a race that lives in the antimatter universe. By the time Sinestro put on a yellow ring, he had turned on the Corps, battled Hal Jordan and seemingly been killed by him. He also was working with the Parallax entity. The biggest and stupidest mistake that the movie makes deals with the scene where Abin Sur tells the ring to select a successor. Hal Jordan was not the first person chosen by the ring – Clark Kent was. Abin Sur wanted the successor to be an actual Earthling. Besides, Krypton is part of Sector 2813 and Tomar-Re was already in charge there. Either way, you could have had  quick Superman cameo that would have made fans shit their pants. Way to drop the ball there guys. OK, my rant is done, go see this movie and hope for a lot more form the sequel.